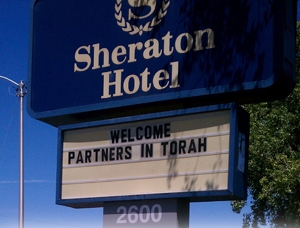 I had no idea what to expect. Truth be told, I didn't think it was a good idea. Albuquerque, New Mexico? When I got the first call back in June from Rabbi Dovid Merkin of Torah Umesorah's Community Development team, I didn't understand the purpose of his request. He wanted the list and phone numbers of all Partners in Torah participants in New Mexico. Now it's not so unusual for us to generate reports like that. Partners in Torah routinely works with community kollelim and outreach rabbis across North America looking for potential new students. The synergy between the Partners in Torah phone mentors and the local rabbis that creates the biggest impact. To the best of my knowledge however, there were no kollelim or outreach rabbis in Albuquerque.

Rabbi Merkin explained that Rabbi Chaim Nosson Segal, director of Torah Umesorah’s Community Development department and affectionately as Rabbi Nate, wanted to make Partners in Torah weekend on Shabbos Nachamu in Albuquerque. The plan was to have a barbeque at the Jewish Community Center on Thursday night and a complete Shabbos program in a nearby hotel.

It seemed wild. It’s not like I never heard of people going to a hotel for Shabbos Nachamu but I could think of other places I’d prefer to be than in a desert out in the sticks. Besides, we only had 35 Partners in Torah participants throughout the state of New Mexico. How many of them could we reasonably assume would come? How many others would show up? Rabbi Merkin waited until I was done and said, “Eli, are the Jews in New Mexico less important than the Jews in New Jersey? Let’s give it a try.” He left me with little choice.

As the weeks moved on, plans were made and a team of outstanding bachurim- four from Chaim Berlin, one from Mir in Eretz Yisrael were handpicked to accompany us on the trip. Flyers were made and sent to Partners in Torah participants. Calls were made to all pat participants of the NJOP’s Hebrew reading crash course in New Mexico. The Seasons Supermarket chain sponsored most of the food; meat was flown in from Denver and sponsored by the Orthodox shul in Santa Fe, New Mexico.

An Orthodox shul in Santa Fe? Yes, with an excellent Rabbi, Rabbi Mordechai Scher, and an occasional minyan on Shabbos. Albuquerque itself has a Chabad and a Sephardic minyan run by the very capable Rabbi David Ritch de Herrara. Rabbi de Harrera is a medical doctor who came with his wife to Albuquerque in 2008 after receiving semicha from the Sephardic Center in Yerushalayim. His shul occasionally gets a minyan — very occasionally — but Rabbi de Herrera is busy offering rabbinical guidance to Jews throughout the state.

When I arrived at the hotel, early Thursday afternoon, I found Rabbi Segal and the bochurim– along with Rabbi David in frantic BBQ mode. Go there, buy this, get that. YIKES! The grates for the grill weren’t toiveled. Rabbi David volunteered to take them to the lake along with the potato peelers needed for the Shabbos chulent.

The room at the JCC was set up for a banquet and the bochurim, along with some helpful locals got to work outside on the grilling. The people started coming; first in drips and drabs, then a steady stream. People came from a host of cities — especially Sante Fe, Rio Rancho and of course, Albuquerque. They weren’t quite sure what to expect — but they surely weren’t expecting what they got. What they got was two full hours of singing, dancing a few short divrei Torah… and an invitation for Shabbos at the Sheraton Hotel. It almost wasn’t fair. As the sensational evening was coming to a close, Rabbi Segal took out all his artillery — one of the best speeches ever, there wasn’t a dry eye in the house. After such unprecedented ruach and Rabbi Segal’s stirring words, it was practically impossible to turn down an invitation to recharge, and in some case to replace, their spiritual batteries that had been eroded by decades of assimilation.

Daniel Israel, a Shomer Shabbos scientist living in Santa Fe couldn’t believe his eyes — his optimism for bringing yiddishkeit to New Mexico was hard to sustain. Now, the blood of optimism was starting to flow more freely. Santa Fe’s Rabbi Scher was no less enthusiastic. Can you imagine what it’s like living in New Mexico, secluded from most of his relatives and friends, tirelessly serving the Jewish community and not having a regular minyan on Shabbos? Rabbi Scher had to hide tears during his dvar Torah. Rabbi de Herrara was overwhelmed. He thought he knew all the Jews in Albuquerque. Boy was he mistaken — and happy to meet so many locals who seemed to crave this authentically Jewish experience. His wife, who moved straight from Eretz Yisroel to New Mexico was overwhelmed. In fact, she initially refused to eat the food because she hadn’t seen the wrappers when the meat came in. Her husband reassured her that he had seen the hechsher and that she need not worry. “Besides, these guys,” he said, “are the real thing.” It was the first hamburger she had in over two years. She happily agreed to take the leftovers home.

On Erev Shabbos, the bochurim, Menecham Rabinowitz, Meyer Segal, Shragy Leizerson, Shmuel Lehrman and Ari Yarmish were in overdrive. They put the same energy into shopping, schlepping, wrapping, peeling, seasoning and stirring the cholent pot that they put the previous night into stirring the heart and souls of their Jewish brothers and sisters.

As the afternoon wore on, the guests started arriving for Shabbos. More from Santa Fe, more from Albuquerque, and several more from Rio Rancho. Four described themselves as Shomer Shabbos, most as Conservative. Many had Orthodox grandparents, some Orthodox parents. Some who moved to New Mexico for a better life. Some who were running from Yiddishkeit. But the Pintele Yid flickers on — waiting to be sparked and reignited. And reignited they were.

The Shabbos was spectacular. The ruach on Thursday night was a tease compared to the Shabbat ruach. The bochurim each sat at another table and sang zemiros like these people never heard before. At different times throughout Shabbos, the bachurim gave inspiring divrei Torah and well-prepared (and well-received) classes. The Friday night oneg went past 2 a.m. One-on-one discussions continued throughout the day. No napping this weekend.

Throughout the day there were lots of informed discussions. “How can we get more of this”? “There’s a Seed program starting tomorrow in Sante Fe? Count me in”! “When are you guys coming back?” “Can we attend the Sephardic synagogue even though we’re not Sephardic?” “Definitely, said Rabbi de Herrara, “and how about a mini-Shabbaton in one month at the shul?” “Great idea. Rabbanit de Herrara chimes in — How can you leave us all alone? We’re in a midbar — literally!”

By the time Seudah Shilishis arrived, the desire for more was palpable. The perfect setting for a speech that only Rabbi Segal is capable of giving. He spoke about Partners in Torah, how we’re all one family, and how we all need each other. Almost everyone in the room had tears in their eyes. Even a woman who described herself as a shiksa, despite having two parents who were born Jews. The woman had lots and lots of “issues” with Orthodoxy. She came to the weekend with a friend who schlepped her along but she came with her boxing gloves on. Now she was sobbing. Every single of her negative stereotypes about Orthodox Jews were shattered.

When Rabbi Segal’s speech was done, participants spontaneously got up to share their thoughts. A 14 year old girl who was there with her mother and her twin brother spoke first. She said, “You guys have it all wrong. Each of you thanked us for welcoming you to Albuquerque or for inspiring you with our interest. Are you kidding? We can never thank you enough. You people changed my life. You opened me up to a whole new way for us to look at Judaism.

Havdallah. More singing, more tears. Then the Partners in Torah sign-ups sheets. An astounding 90% of the people there signed up on the spot. The rest promised to fill out the cards and send it back to us. The Rabbanit asked if she could join as well. “It’s only one hour a week? Can you get me more than one partner?”

There was no Melava Malkah scheduled but most of the people stuck around. They didn’t want to leave.

Now the real work begins. The 14 year old girl from Rio Rancho needs a few enthusiastic seminary graduates to learn with and befriend her. Her brother needs yeshiva bochurim to do the same. Mentors are needed for everyone who signed up — soon. The Rabbanit needs Hebrew speaking women who will learn with and stay in touch with her. A full Seed program needs to be organized for next year. And the Jews in New York and New Jersey need to know that the Jews in New Mexico are just as important as they are. Hey. I’m learning.

So much to do. So much that can be accomplished. Albuquerque is waiting. Waiting for you to call 800-STUDY-4-2.

Rabbi Eli Gewirtz is Director of Partners In Torah