“Outside Was Cold, But Inside Was Warm”: An interview with Rav Eliezer Sorotzkin about his experience aboard El Al flight LY008 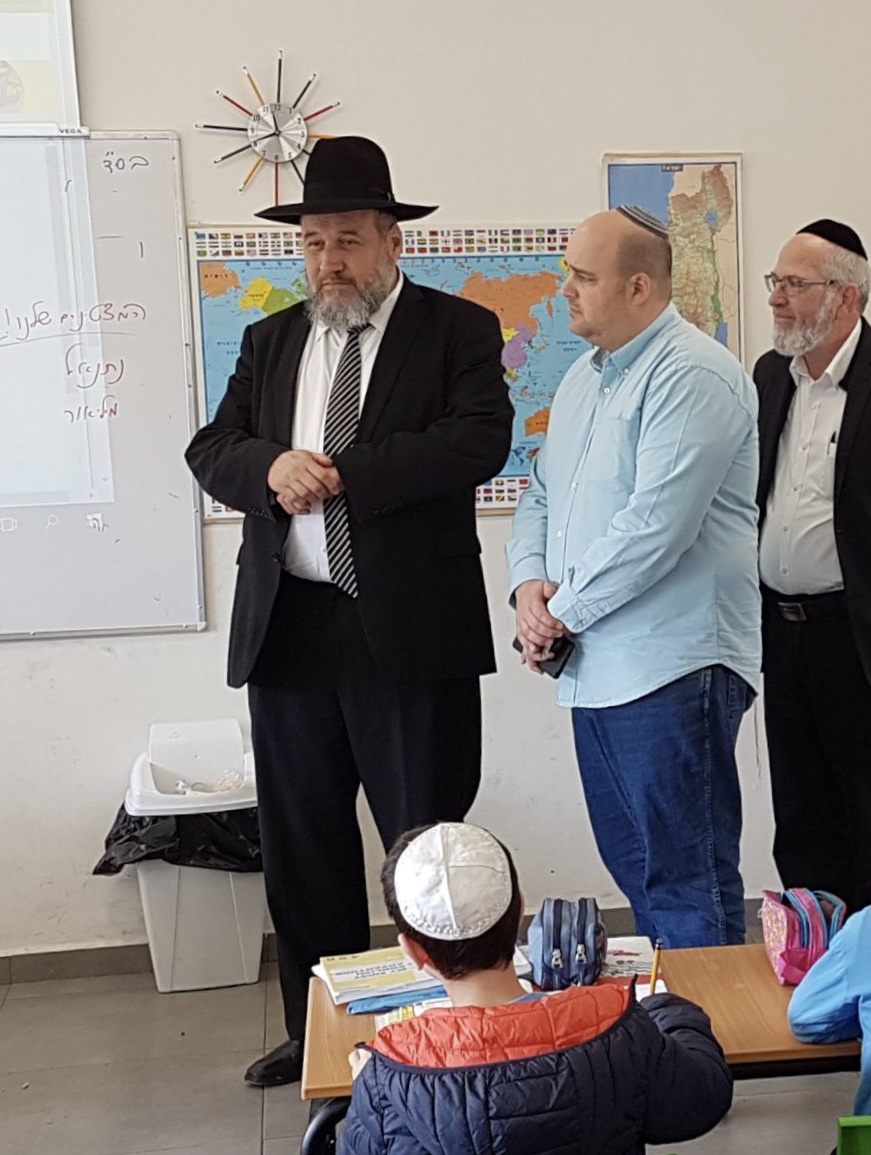 Rav Eliezer Sorotzkin wears many hats. Last Sukkos, when he went to Rav Aharon Leib Shteinman zt”l, Rav Shtienman looked up and quipped with a smile, “Da bakumen di tzvei kaplichin!” (The man with two hats is here!) Rav Sorotzkin serves as the director of Lev L’Achim, supervising and maintaining hundreds of kiruv yeshivos and chadorim for unaffiliated youth of Eretz Yisroel. He also runs Chinuch Atzmai, the network of the Torah educational schools across Eretz Yisroel, which faces a huge problem now that the Israeli government has discontinued funding for transportation.

Rav Sorotzkin’s days start early, as he davens in Netanya in the shul that he presides over as rov, and he then spends the daylight and nighttime hours based out of his office, traveling the length and breadth of Eretz Yisroel, delivering much-needed guidance and chizuk to the staff and volunteers of Chinuch Atzmai and Lev L’Achim.

After participating in the Lev L’Achim Shabbos of Chizuk in the Syrian community in Flatbush, Brooklyn, Rav Sorotzkin boarded El Al flight LY008 back to Eretz Yisroel on Motzoei Shabbos. As reported, the plane was diverted to Canada, and the passengers were stranded for almost a full day, finally landing in Eretz Yiroel on Monday morning. After almost two days without sleep, Rav Sorotzkin spent Monday like every other day, hard at work strengthening the triplicate bond of Klal Yisroel, Eretz Yisroel, and Torah.

I was finally able to reach him on Tuesday morning Israeli time. Wondering what he was doing on that plane for hours on end, unable to communicate with anyone or engage in what he does all day with a passion, I eagerly listened as he told me of his experiences. I learned that not only did he spend him time on the plane productively, but he did exactly what he always does – engage his fellow Yidden and embrace them with his warmth and his loving heart.

“The flight began routinely, but then calamity set in,” Rav Sorotzkin told me. “Because of a malfunction with something with the motors, the pilot announced that he must land in the closest airport. Already over the Atlantic, the pilot made a U-turn and landed on a Canadian army base in Goose Bay. The airport was a proverbial hole in the wall, without a proper terminal. Even if they would have let us off the plane, there would have been nowhere to go. We could not even go outside, as the temperature was -38 degrees Celsius. It was frigid outside! When they opened the door to bring in some basic supplies, the passengers near the door could feel the chill in their bones. We sat on the tarmac in this little airport for more 15 hours.

“Everyone in the media is focused on the details of what happened to the plane, how it happened, why it happened, and where it happened. But Hashem wants us to think a little deeper. Let me share my thoughts and experiences while I was on that trip for almost two full days.

“We saw amazing things. The inner spark of many Yidden were ignited on that plane. The plane was a microcosm of the everyday efforts of Lev L’Achim. On that plane were approximately 500 people. Many of them were typical chareidim, many dati, some goyim, and some completely unaffiliated Jews. All of a sudden, with the emergency landing, we Yidden became like brothers. On a typical flight, there are a few minyanim, each with a little more than a minyan. But on this flight, with nowhere to go, we became like family. The Mincha minyanim had 50 people each. There was a huge minyan for Maariv, with about 100 people davening together. All of a sudden, 500 strangers became one family. There was an achdus that was felt. Even the chilonim on the flight, who might have not davened for years, took part in the minyan. People started speaking to each other nicely. We all felt like we are in this together.

“What was most amazing was that the chilonim on the flight started realizing that Yiddishkeit is beautiful. The stereotype of the rock-throwing, draft-dodging, close-minded and insular chareidi slowly melted away. Baalei batim from New York and their unaffiliated brothers from Naharia were talking as if they were brothers. It was amazing.

“The hearts of Yidden opened up,” continued Rav Sorotzkin. “I started shmoozing with people. They asked me, ‘What exactly is Chinuch Atzmai? Why do you need your own schools? What’s wrong with the regular schools?’ And I explained it to them. I explained that we have a mesorah with respect to how to teach Torah. This is the way we learned and taught for generations. I explained to them the problem we have now with bussing. I told them that I am coming from Flatbush, where Yidden donated thousands of dollars towards our efforts in spreading Torah in Eretz Yisroel. They were amazed. All of a sudden, they started speaking. ‘My grandfather used to go to yeshiva also!’ ‘My father gave me tefillin when I was bar mitzvah!’ It was beautiful!

“I realized that now that they were stuck on the plane, their ears and their hearts opened. They had a moment to think. We were sitting in the plane for 15 hours, without television, without email, without social media, and without any other nonsense. We were just ourselves. This was a rega shel hisromemus, a moment of greatness.

“As the staff of El Al was trying to arrange fresh food for the passengers, I heard one of the non-religious passengers say, ‘I’m sure there is no kosher food here anyway, so either way, we won’t be able to eat.’ It turns out that there was no food available in the small ‘terminal,’ but they did bring out water.

“I watched with tears in my eyes as the minyan for Shacharis ended and a chiloni Yid asked his seatmate if he can put on his tefillin. As I was taking a taxi from Ben Gurion Airport back to my home after the two-day flight, I was thinking, ‘Halevai all the chilonim in Eretz Yirsoel would have been on that flight! They would have been able to spend some time with true Torah Yidden. There would be no need for the entire Lev L’Achim. Our work would be done!’

“25 years ago, at the height of the Lev L’Achim movement, there was a terrible feeling of hatred from the irreligious toward the religious in Eretz Yisroel. Rav Shach wrote a famous letter, stating that every avreich should spend one hour a week on kiruv. They went knocking door to door, and asked to speak to parents, to children, to anyone who would listen. They tried to break through the outer shell of the hearts of their fellow Yidden who were lost to the waves of assimilation. This was during a tekufah when frum Yidden were harassed in the street and were shouted at as ‘chareidi meluchlach.’ There was no sympathy for chareidim then. There were many instances of yungeleit who had the door slammed on them. But one thing was true across the entire Eretz Yisroel. If a yungerman succeeded in entering a home and engaging in conversation with chilonim, he saw their hardened hearts soften. They listened. Their divrei emes struck a chord. Torah is true and truth speaks to people. Lev L’Achim saw tremendous hatzlocha through this campaign of Rav Shach. Children from all over Eretz Yisroel enrolled in yeshivos, and now, 25 years later, they are true bnei Torah.

“We saw the same phenomenon happen on the plane. Yidden listened. And when Yidden listen to the truth, the truth speaks to them. All of a sudden, there was no hate. Every bad feeling

“Secondly, I saw something else on that plane. Today, we saw an amazing concept. Man, through technology, is able to send a satellite to Mars. We can send people to the moon. But here, due to a small miscalculation, the entire plane, with all of its technology, was useless. We could not get off the ground. We were stuck without food, without real shelter, sitting in one of the most advanced technological breakthroughs, an airplane. Yet, we were powerless and the plane was useless.

“This is what is happening in Eretz Yisroel right now with Chinuch Atzmai. We have Torah education available to every child in Eretz Yisroel. From Naharia to Be’er Sheva, any child who wishes to learn Torah is able to. We have yeshivos. We have menahalim. We have rabbeim. But now, the government pulled the plug on just one technicality: the wheels. We don’t have busses. Everything can be in place, but if we are missing the ability to bring the children there, we are powerless. The Ribono Shel Olam is giving us this message. We all wanted to go to Eretz Yisroel. Gevaldig! What can be better than that? We want to do the right thing. But we were stranded, without wheels. We must all take this message to heart. We must give the wheels to our brothers and sisters in Eretz Hakodesh. We must all take part in this avodas hakodesh.”