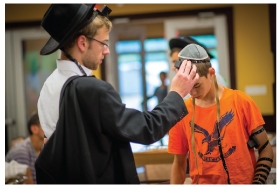 For most kids lucky enough to go to summer camp, it's all about getting away from the city after a long year of school for a few weeks of fun with friends. That may also be the initial draw for first-time campers attending The Zone, Oorah's summer camp program, but for the volunteers who staff this Oorah program, it's about something else altogether. It's about giving the children an intensive, all-encompassing Torah environment filled with achdus and kedushah in the hopes that some of it will stick.

Rabbi Simcha Ullman, mashpia of The Zone’s senior division, is a driven man. He knows that those few weeks at The Zone represent a once-in-a-lifetime chance: a chance to reach campers’ hearts and minds, and to show these young boys that the paths of Torah are darchei noam. With each camper, it’s all about finding the key that will unlock the soul to emes and to frumkeit.

One logical way forward is the natural desire of campers to look up to and emulate the staff. The staff illustrate for campers in real time that living a Torah lifestyle is not only possible, but desirable. Through their counselors and division heads, the campers can see that living a Torah life is about investing every act with meaning and kedushah. The boys at The Zone are young, but they sense the difference between just getting through the daily grind of life unscathed and living a life that impacts on the world for good.

Each “Zoniac” gets a set of tefillin for the duration of camp. The boys are instructed regarding the meaning and use of their camp tefillin. They start each day of camp with them. They see the staff laying tefillin and also how they store their tefillin with love and care in bags embroidered with their names.

Rabbi Ullman has found that the tefillin are a measure by which he can see the progress of the campers. As the end of camp draws near, he asks the boys to hand in their camp tefillin.

Some of the boys return their tefillin easily, as if it’s no big deal. But Rabbi Ullman looks for the others. The boys who look crestfallen. The ones who plead with their eyes, “B-b-but you can’t take them away. How will I daven now that I’m leaving The Zone? How will I lay tefillin without tefillin? I need them. I need my tefillin.”

These are the boys he watches for, the boys he hopes to see. It’s these campers to whom Rabbi Ullman will say, “You can keep them. You’ve passed the test.”

Of course, The Zone experience doesn’t end with camp. The counselors stay in touch. The campers still have their Torah Mates to learn with over the phone. Some still have learning and fun at Chill Zone each Motzoei Shabbos.

As for Rabbi Ullman, he stays in touch with the boys’ parents. He wants to know if the boys are still putting on tefillin. And if they are, and they’re still laying tefillin by Chanukah, they can expect to receive from him a new velvet tefillin bag, embroidered with their own names – bags just like those of The Zone staff members, to keep the memory of that incredible, kedushah-filled summer, the exemplar of a Torah lifestyle, alive in their hearts forever.