Oorah Nachas Files- The Week That ChillZone Was Officially Cancelled 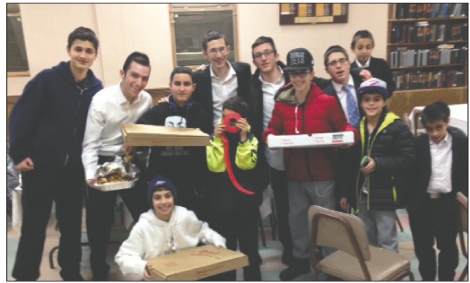 With heavy snow causing treacherous driving conditions across the East Coast a couple of weeks ago, many ChillZone programs were, to many children's dismay, forced to cancel. But Elazar Wacholder, an Oorah volunteer, had a feeling that there would surely be some boys who wouldn't get the update, so he made the trek to the Brooklyn ChillZone location at the usual time on Motzoei Shabbos. Sure enough, twenty boys and four staff members showed up.

Despite the frigidity outdoors, the kol Torah in the bais medrash was strong and continued even longer than the usual time. As the boys were enjoying the hot food after the learning, Ariel’s* father told Elazar the most incredible story.

“My son, Ariel, won those ten dollars,” his father told Elazar, “bringing home $11 total, because he’d answered another question correctly too. When we got home, Ariel ran upstairs to hide the money in his room.”

Ariel saved the money for three and a half weeks.

“This week,” his father continued the story, “a tzedakah collector from Israel came to our door. I gave him $5, the amount I usually give, and was ready to send him away when my son said, ‘Dad, wait.’ Ariel quickly ran up to his room and came down with the eleven dollars that he’d won. He gave all the money to the tzedakah collector.

“I was quite surprised. Eleven dollars is a lot of money for a kid his age. So I asked my son, ‘Why did you give all of the money you were saving to the man?’”

Ariel went to a yeshiva with tuition assistance from Oorah. His answer touched his dad. “My rabbi told me that any money you give to charity, G-d will pay you back.”

Just as Ariel’s father finished telling this story to Elazar, the ChillZone leader announced the grand prize winner of the week.The winner was none other than Ariel, who had such pure bitachon that Hashem would repay him the money he’d given to tzedakah. Indeed, he was already paid back with a prize worth far more than eleven dollars. But the true reward? That, we believe, is yet to come.

*Not his real name