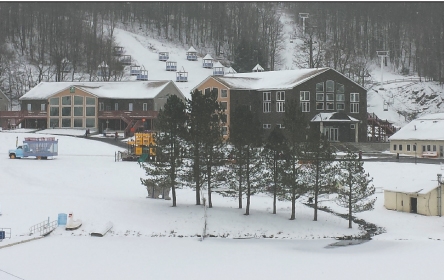 There were girls who had been waiting weeks or even months for this weekend. There were girls who came with sleeping bags because there were no beds left, but they couldn't bear to miss the event. One thing was clear: every one of the 600 or so girls at the snow-covered TheZone camp on Shabbos Parshas Va'eira was more than excited to be attending an Oorah ShabbaZone.

From the ice cream party on Thursday night to ChillZone on Motzoei Shabbos, every minute of the weekend was jam-packed with fun, warmth, enthusiasm and inspiration. No one left the event untouched, from TheZone campers who enjoyed the opportunity to relive their summer memories to ChillZone attendees seeing TheZone in action for the first time, to the volunteers who made the Shabbos a huge success and the guests who watched in amazement.

Even Mr. Timothy Knight, local editor of the Schoharie News website, who stopped by on Motzoei Shabbos, couldn’t help but be blown away by what he saw. “The experience of last night’s event,” he wrote to Rabbi Avraham Krawiec, TheZone camp director, “from the enthusiasm of you and your staff to the energy of the girls on their retreat and everything in between, touched me inside. As someone raised by an ardently pro-Jewish mother, I have long been taught respect, love and admiration of your culture, but to witness the love that all of you hold for each other to achieve, undoubtedly, a higher calling to touch those children’s lives…is awe-inspiring and it thrilled me to no end.”

His sentiment was echoed by another guest, R’ Shalom Jaroslawicz, an Achiezer coordinator.

“I drove away from Shabbos totally speechless,” R’ Shalom wrote to Rabbi Krawiec. “In my line of work, I am fortunate enough to see a lot of the amazing things Yidden do. What I saw on Shabbos was nothing short of amazing! …The amazing program and atmosphere you create for the campers is not to be believed. The smiles that were on their faces said it all. And the standards you keep the staff to is an amazing foundation for the rest of their lives. Being part of this whole project makes the girls realize how important every one of their actions and words is… The staff members do not know how lucky they are to have such an opportunity.”

Even those already very familiar with the power of an Oorah event found themselves impressed. When twelve buses pulled into camp on Thursday evening, the sleepy campus was quickly transformed into a bustling scene. With more girls than beds, TheZone seemed to inherit the bracha of the Bais Hamikdosh, expanding miraculously to make room for everyone. From the opening of the program until the girls boarded the buses home, the schedule was well planned and well executed.

“What a beautiful, inspirational and well organized ShabbaZone this was!” enthused Mrs. Ruchie Cohen, mashpia for the seniors division in the camp.

Most importantly of all, the girls left with hearts warmed and with memories to last the long winter.