One Nomination Worse Than The Next 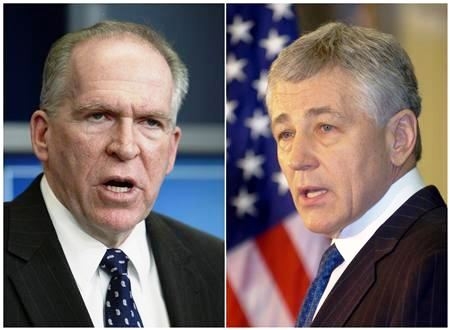 Barry Rubin of the Gloria Center, one of the Middle East's shrewdest analysts, was in an unkind mood last week, as he himself admitted. The common element joining President Obama's three appointments last week - Senator John Kerry for secretary of state, Chuck Hagel for secretary of defense, and John Brennan as director of the CIA - is, in Rubin's view, that â€œthey are all stupid peopleâ€ of the worst sort - â€œstupid, arrogant people, with terrible ideas.â€ Unfortunately, there is little to contradict Rubin's harsh judgment. Each holds views that make it impossible for them to understand Middle East reality, much less do anything about it. Hagel, for instance, is a â€œrealist,â€ which is, as we shall see, a doctrine having little to do with reality. Among the central planks of realist doctrine is that the Israel-Palestinian conflict is at the center of all the Middle East's problems, and that the United States' interests are significantly damaged by the lack of resolution of that conflict.

Speaking at J Street’s first annual conference in 2009, Hagel said, “The Israeli-Palestinian conflict is central, not peripheral, to U.S. vital security interests in combating terrorism, preventing an Iranian nuclear weapon, stability in the Middle East and U.S. and global energy security.” Each one of these examples is patently absurd. Though Iran might use a nuclear weapon to strike at Israel, that is not the primary purpose for which it seeks nuclear weapons. Ayotallah Khomeini defined the 1979 Iranian revolution from the start as an Islamic revolution. He and his successors identified nuclear weapons as a potentially important tool in spreading that revolution and immunizing Iran to countermeasures from the West.

And Israel has precious little to do with the instability of the Middle East, as the events of the past year have made abundantly clear. Israel has not kept Egypt from being able to grow enough grain so that it does not have to import from the rest of the world (though Israel would certainly be able to help Egypt in this regard). Israel does not keep Saudi men from working or looking down on those who do. Israel has nothing to do with the second-class status of women in almost every Muslim society and the lost potential that follows. Israel is not responsible for the high rates of illiteracy and paucity of academic production of the Arab world (though again it could help to alleviate them). The Sunni-Shiite divide that continues to roil Muslim countries preexisted the State of Israel by more than a millennium.

Israel was not an issue during the Arab Spring, or the Libyan civil war, or the Syrian civil war. Israel did not cause Iraq to invade Kuwait or have anything to do with the Iraq-Iran war that claimed more than a million lives. Israel had nothing to do with the Algerian civil war, or with the slaughter of 400,000 black Muslims in Darfur by their co-religionists. The bloodshed in all the Israel-Arab wars since 1948 is chicken feed in terms of Middle East bloodletting.

It is the perpetual backwardness of Arab and Muslim societies that causes such resentment and hatred of the West, of which the United States is the principal representative – the Big Satan. Al-Qaeda’s propaganda justifications for the 9/11 attacks on the Twin Towers and the Pentagon centered on the United States and its defiling presence on holy Saudi soil. Israel was only added later as an afterthought, because attacks on Israel have a special status for much of the Western Left. But again, Israel bears no responsibility for the near universal backwardness of Moslem societies.

In short, to refute one of “realism’s” central premises, all one needs is half a brain cell in their head and eyes in one’s head.

One of the central corollaries of the realist emphasis on the centrality of the Arab-Israel conflict is that America should impose a settlement on the conflict. In 2002, when Palestinian terrorism against Israelis was still in full swing – terrorism that Hagel justified as “desperate men do[ing] desperate things” – he opined that the time for negotiations had passed. “An end-game must be brought to the front, now.” In short, the United States must impose a solution on the parties, even when the Palestinians have yet to show any willingness to accept Israel’s existence.

But if the Palestinians refuse to accept a two-state solution, such an imposed solution, however it was drawn, would be life-threatening for Israel, since it would certainly put Israel in a less defensible situation than today. It is not just Israelis, but also impartial observers of the Middle East, who have finally come to see that there is no Palestinian acceptance of Israel’s existence. As Walter Russell Mead wrote last week, “The real problem is what it has been for sixty years, deeply rooted Palestinian opposition to a two-state solution.”

Mead even argues that the Palestinian opposition is not wholly irrational, for the truth is that “the West Bank and Gaza together are not enough to support the existent Palestinian population.” But rational or not, as long as no Palestinian leader could sell a two-state solution to his people, the Israelis cannot help but doubt that a peace agreement would be honored even if it were signed. They will not trust the tender mercies of Hagel and President Obama.

IN MANY RESPECTS, the nomination of Obama’s counter-terrorism chief John Brennan to head the CIA is an even worse disaster. How can someone whose vision has been blinded by the dictates of political correctness possibly give the president the quality analysis he needs? Unfortunately, Brennan, like Hagel, has been deliberately picked by the president precisely because of his ardent political correctness.

Brennan oversaw the purging from all U.S. government counter-terrorism and law enforcement manuals any reference to radical Islam, Islamism, or jihad. Jihad, he writes, is a “holy struggle to purify oneself or one’s community,” a line that could have been taken directly out of the propaganda of Muslim Brotherhood-affiliated American Muslim organizations. He deliberately ignores the fact that jihad in contemporary Islamic discourse almost always refers to military action to spread Islam.

He consistently defines the terrorist threat as Al-Qaeda and affiliated organizations, without ever mentioning or appearing to notice that Al-Qaeda is only one of a large constellation of Islamic terrorist organizations. And in a discussion of the sources of terrorism, he writes of violent extremists as victims of “political, economic and social” forces, but never of religious forces.

Religion, or the one particular religion whose adherents are behind almost every terrorist attack in the world, is never allowed to intrude into Brennan’s analysis. Thus, he told Congress that the Muslim Brotherhood is a moderate secular group, and has urged the greater inclusion of Hezbollah into the Lebanese political system. His confidence in the moderating impact of political participation is apparently unlimited when it comes to the Muslim Brotherhood and Hezbollah, and we are today witnessing the fruits of what can only be described as a pro-Muslim Brotherhood policy in Egypt.

Brennan claimed as proof of Hezbollah’s path towards moderation the fact that it includes in its ranks doctors and lawyers. Well, Hezbollah’s arch-terrorist, Imad Mughniyeh, Osama bin Laden’s replacement Al-Zaharwi, the pioneer of air hijacking George Habash, Hamas leader Ismail Haniyeh, and Josef Mengele were all doctors, and Yasser Arafat an engineer. That is hardly proof of moderation.

Brennan’s analysis is on par with the 80-page government report on the Ft. Hood massacre, which made no mention of the perpetrator’s religious beliefs, even though he shouted “Alla-hu Akbar” as he shot thirteen people. The report even managed to conclude that “religious fundamentalism alone is not a risk factor,” though it did not suggest what other risk factors might have led to Dr. Nidal Hassan’s murderous rampage.

After a while, such relentless political correctness and white-washing of Islamic extremism cannot but cloud analysis. What cannot be mentioned is eventually not thought about. Thus, the X-mas airplane bomber, who just narrowly missed blowing up a commercial airliner, with more than 200 passengers above Detroit, was never placed on an American watch list, despite warnings from British intelligence based on the terrorist’s father’s expressed concerns about his growing religious fanaticism.

Brennan’s entire career seems to consist of one faulty judgment and failure after another. On the eve of the Obama presidency, he recommended rapprochement with Iran based on a policy of advancing rather than trying to thwart Iranian interests. Since the expressed goal of the current Iranian regime is the spread of its own form of theocracy, it is hard to know what “Iranian interests” he had in mind. In any event, we know how well that turned out.

Brennan enthusiastically endorsed the 2007 National Intelligence Estimate, which concluded that Iran had halted work on is nuclear weapons program based on a ridiculously narrow definition of nuclear weapons program, which did not even include the 3,000 centrifuges openly enriching uranium at Iran’s Natanz site as the report was issued. The opening statement, which was belied by almost everything else in the report, was carefully crafted by the U.S. intelligence community to forestall President Bush from seeking new sanctions against Iran and even more so from military action.

Even The New York Times now admits that U.S. counter-terrorism policy overseen by Brennan in North Africa, starting with the decision to intervene in Libya, has been a “comprehensive failure.”

Oh, and just in case you were wondering, Brennan is no friend of Israel. Besides his endorsements of Hezbollah and the Muslim Brotherhood, he also recommended that the U.S. engage Hamas. Again, the failure is the total inability to take seriously Hamas’ theological call for the extinction of Israel. He often refers to Yerushalayim as Al-Quds, and when addressing a Muslim group at NYU he complained, “It’s tough, but we are not going to separate ourselves from Israel.”

Could someone in the White House be sending Israel a message?