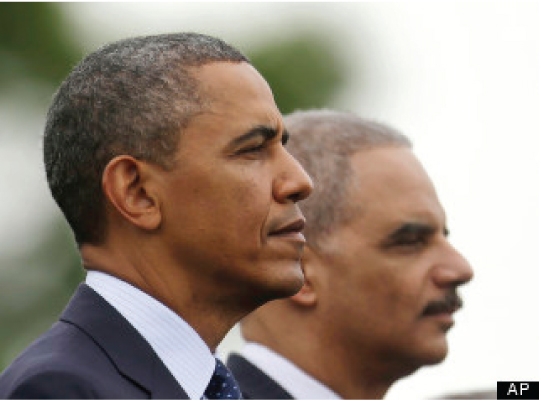 Two weeks ago, President Obama stunned the nation by announcing his intention to use his â€œexecutive privilegeâ€ to grant amnesty to up to 5 million immigrants living illegally in the United States.

Obama said he was forced to circumvent Congress because “Congress had failed to act “[to fix the nation’s broken immigration system.]

Democrats, eyeing the millions of Hispanic immigrants who will likely acquire voting rights with their new status as a substantial bloc of party support, hailed the move.

But many others, including most Republicans, were outraged. They felt the president was abusing his authority in unilaterally banning enforcement of immigration laws. Even those who favor a path toward citizenship for illegal aliens were alarmed at the implications of the president’s radical action.

“I support the idea of giving all these people this new status. But doing it by executive action, redefining the status of millions of people without a law, without going through the normal legislative process, that strikes me as an extreme abuse of executive power,” a N.Y Times op-ed by attorney David Brooks, asserted.

If President Obama can refuse to enforce a valid federal law affecting millions of people, are there any limits to his powers, people wondered. What is to stop him from overriding other laws that don’t find favor? Or to act on his own where Congress has declined or refused to act?

“President Obama’s justification for his executive action is that ‘Congress failed to act.’ Using this rationalization, Obama can act whenever his favored policy is ignored. Congress did not fail to act, it chose not to act in granting amnesty,” pointed out a Fox News columnist. “Congress considers and debates a great many bills. Not all of them pass.”

Other presidents have exercised executive privilege in granting amnesties but the sweeping, blanket amnesty for millions of people who broke the law to enter this country is a radical departure from any of the executive actions issued by previous presidents.

President Ronald Reagan utilized executive action in 1987 to grant a limited deportation reprieve to certain spouses and children of immigrants in this country illegally. But his action and a subsequent extension by his successor, President George Bush, was an extension of an existing amnesty law that Congress had already passed.

Three years earlier, when pressed by pro-immigration reform activists as to why he could not initiate reforms on his own President Obama said, “The notion that somehow I can just change the laws unilaterally is just not true.” He said, “I know some people want me to bypass Congress and change the (immigration) on my own. But that‘s not how our system works. That’s not how our democracy functions. That’s not how our Constitution is written.”

Apparently, the president realized he can alter the laws unilaterally, brandishing the executive privilege of his office almost as a magic wand that defeats the opposition in one fell swoop. What changed?

Some believe it was the long-simmering Fast and Furious scandal that politically threatened important people in the Obama Administration that provided a testing ground for the president’s exercise of executive privilege.

The Republican takeover of the House after 2010 gave Rep. Darrel Issa, R-Ca., a platform to investigate the Obama administration’s handling of a gun trafficking fiasco, overseen by the Phoenix division of the Bureau of Alcohol, Tobacco, Firearms and Explosives (BATFE).

From late 2009 to early 2011, A.T.F. agents allowed guns to “walk” – choosing not to block the sale of guns to Mexican crime gangs in what they said was an effort to build a bigger legal case against the suspects. Others charged this reckless scheme was intended to cause fatalities in order to bolster public support for the Administration’s gun control proposals.

In any case, law enforcement officials lost track of about 2,000 guns that probably reached a Mexican drug cartel. Two of the weapons were found near a December 2010 shootout at which a Border Patrol agent, Brian Terry, was killed. Other guns were later found at other crime sites where people had been shot.

Rep. Issa’s investigation into this lethal scheme was stymied by Attorney General Eric Holder’s refusal to turn over DOJ documents that might shed light on who had ordered it. How high up the chain of command did the order originate? Was the White House involved?

In June 2012, in response to months of stonewalling and refusal to disclose the requested documents, a congressional panel cited Holder for contempt – the first attorney general in U.S. history to suffer this disgrace.

The fallout from Fast and Furious and other scandals so muddied Holder’s reputation that less than a year later, the attorney general announced his resignation. But back to the contempt citation: Immediately after it was issued, President Obama asserted executive privilege to shield Justice Department documents from disclosure – the first time he ever invoked executive privilege in response to a congressional inquiry.

The move forced the debate over the Fast and Furious scandal to a broader arena where a struggle between the separation of powers began to play out. Critics mocked the assertion of executive of privilege to shield documents that they believed in no way qualified for exemption under the doctrine of executive privilege.

The move prompted Judicial Watch to file FOIA requests that the DOJ ignored. Judicial Watch then filed a lawsuit with a Washington D.C. District Court and won a court order to the DOJ to produce the long-sought documents.

On November 3, prior to midterm elections, in compliance with the court order, the Department of Justice finally released what President Obama had used his executive privilege to suppress – over 64,000 pages of materials pertaining to BATFE’s Operation Fast and Furious. Much of it was heavily redacted. The DOJ apologized for the excessive redactions, saying they were due to the Department’s attorneys “not having sufficient time” to properly asses the nature of documents.

The thousands of pages are still being sifted for answers to profoundly troubling questions, but important revelations have already come to light.

In one instance, an AK-pattern rifle from the botched operation was identified as the weapon used in a shootout in Phoenix, Ariz. The gun was one of dozens bought in a single day by a man under BATFE surveillance. BATFE let the man continue his criminal activity, later claiming it lost track of the weapons.

Who was responsible for this gross irresponsibility at best, and deliberate endangerment of lives at worst? Who ordered it? What was their true motive?

Equally troubling, despite the deadly consequences of BATFE’s actions in the gun-walking scandal, documents from the batch just released to the House Committee indicate that AG Holder took a passive, even scornful view of these grave concerns. In one email, Holder dismissed congressional interest.

With more sensational international events gripping the public’s attention of late, developments in the Fast and Furious scandal tend to have been obscured. But Rep. Issa said the House Oversight Committee intends to pursue the matter until the full truth is bared.

“When Eric Holder wants to know why he was the first Attorney General held in criminal contempt of Congress, he can read the judge’s order that compelled the production of 64,280 pages that he and President Obama illegitimately and illegally withheld from Congress,” Issa said in a statement.

“Since these pages still do not represent the entire universe of the documents Congress is seeking related to the DOJ’s cover-up of the botched gun-walking scandal… our court case will continue,” Issa said. “We are deeply concerned that some redactions to these documents may be contrary to the judge’s order in the case.”

As Americans weigh the impact of Obama’s assertion of executive privilege in wiping away immigration laws duly enacted by Congress, it is worth revisiting the weighty fact that his earlier exercise of that power in the Fast and Furious scandal was not supported by the courts. What that portends for the future of the White House’s new immigration policy remains to be seen.

“Men like Madison, Jefferson and Adams were keenly aware of the tyranny and corruption of authority concentrated in too few hands,” wrote Dave Garret, a former defense attorney and present anchor on Fox News.

“They knew the thirst for power posed an existential danger to those who cherish freedom. They knew that absolute power corrupts. And they feared a future president that might dare to turn his high office into an instrument of unrestrained power.”