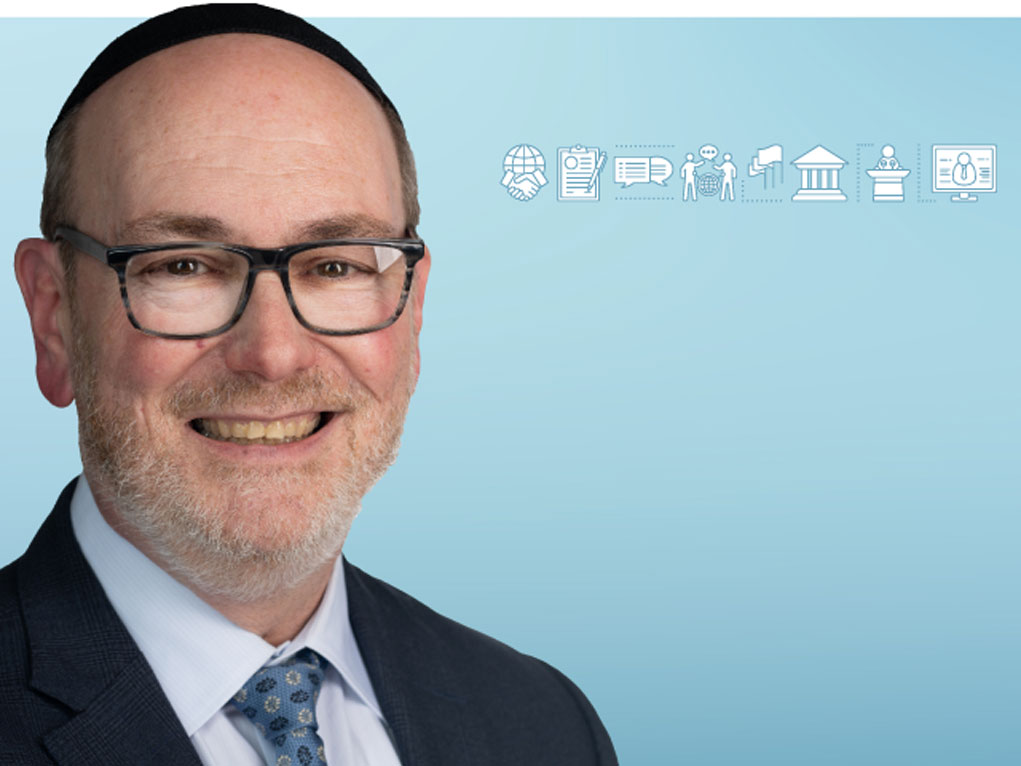 Mitchell Aeder spent his career as a corporate tax lawyer, where privacy is valued and discretion is the name of the game. He plans on using those principles in his new position as the new president of the Orthodox Union, he told the Yated on Monday in an interview.

Aeder, a retired attorney living in Queens, was selected last week for a two-year term as the OU’s 18th president. He takes over from Moishe Bane, who served for the past six years. Yehuda Neuberger, whose wife Anne is President Biden’s deputy national security advisor for cybersecurity, was chosen as the new chairman of the Board of Directors.

Aeder has previously chaired Yachad, the OU’s arm assisting people with special needs, as well as the Youth Commission that governs NCSY, the OU’s youth movement.

The OU — most recognizable by its kashrus division and All Daf program — was established 125 years ago.

You’re about to take the reins of the Orthodox Union.

I did. I took the reins last week already.

Oh, so you’re fully in charge. Any changes yet besides the temperature in the office?

We’re trying to improve the food in the office. More nosh (laughs).

We can all get behind that.
You know better than I that there’s a lot of challenges in the world and I want to get to that. But can you first introduce yourself to readers?

I grew up in New Jersey. I went to public school, all the way through 12th grade. That I went to college and then spent two years learning in Eretz Yisroel, at Yeshivas Darche Noam. From there I went to law school, and then I worked as a corporate tax lawyer for the next 30 years or so, first for a law firm and then for PricewaterhouseCoopers.

I wouldn’t say it’s one of the most difficult times for Klal Yisroel right now, but I would call it a very unique time with unique challenges. You have the new government in Israel, you have a lot of domestic challenges, a lot of global challenges such as in Ukraine. Which philosophy do you plan on relying on to guide you through this?

I’m an optimist. I believe that this is possibly the greatest time Klal Yisroel has had in many generations. The community is growing and thriving and there are more people learning Torah than ever before. Are there challenges? Yes, boruch Hashem there are challenges. But from an OU perspective, we are committed to providing the services to the Jewish community, and specifically to the Orthodox community, in terms of limud Torah.

This includes the All Daf, All Mishna and All Parsha apps, as well as our Semichas Chaver Program. We have kiruv programs which are meant to provide across the board help for people to live a healthier religious life. Certainly our kashrus — OU Kashrus — which is the gold standard, I believe. The breadth of OU Kashrus more than anything else allows us to live literally a kosher life.

With the new Israeli government in place, which has been vilified as “the most rightwing in history,” what type of advocacy will you be providing?

The OU is not a political organization.

I’m talking from a religious perspective.

I understand. We have and maintain good relationships across the board, both in the US as well as in Israel. The biggest concern that I have right now is the level of the dialogue that’s out there in the press, vilifying frum people… I think it is very dangerous and hurtful. If we can play a role to try to lower the temperature and to get people to focus on the facts and work a little bit more towards achdus, that would be a real benefit.

Did the OU issue a statement on this specific thing? You had a group from the leftist T’ruah organization send out a statement claiming that a few hundred “rabbis” are saying that they’re not going to work with the new Israeli government and you had a counter statement from the CJF, the Center for Jewish Values, denouncing them. What about the Orthodox Union?

We did not put out a statement.

Are you planning on?

I don’t think we have any current plan to put out any statement. Our approach is quiet diplomacy. Whenever possible, we try to talk to people, both with whom we agree and with those whom we disagree. We think that a quiet tone very often people listen to more than a loud tone.

You mentioned the media hatred against the community. What about a little closer to home? These past couple of months has seen a series of New York Times articles against the Orthodox community in New York, against yeshivas. What is the OU’s position on that?

Have you had any conversations with anybody about this — either with anyone in the media or within the organization — about how to counter this?

We’ve had any number of conversations, and they are ongoing conversations, as to how best to try to address it. But I don’t think there’s been a resolution of what the best approach is.

The biggest refugee crisis that the Jewish community has had in 35 years happened over the past year in Ukraine. Are there still ongoing projects that the OU is involved in, either within Ukraine itself or in other countries to help resettle them?

In the early stages of the war, back in February, March and April, the OU worked very closely with Agudah and other organizations — we were particularly focused on food distribution. We raised a lot of money towards those efforts. But we have since turned that over to others and we are no longer directly involved in that enterprise.

Until a couple of years ago, if I would speak to the head of the OU I would say that the most recognizable part of the OU as it relates to our readership is OU Kashrus. Now, what is probably even more recognizable is the All Daf program, which is something that many people use. Do you have any plans for expansion in that or in establishing new projects?

Yes. We are constantly looking. Boruch Hashem, the success of those program has been mindboggling. As you probably know, All Daf recently launched a Yerushalmi program, so we now have many people learning Yerushalmi for the first time via All Daf. We have several different digital platforms for limud Hatorah, and we’re constantly looking at ways of expanding those and deepening them. It’s all a function of what the market wants and the funding to be able to accomplish it.

What new projects do you want to launch in the course of your leadership term?

The OU has something in the range of 3,000 employees — we’re primarily in the US and Israel, but in Canada and South America as well. So we have an incredible breadth of programs, all of which have really one goal — to enhance the religious lives of Jews. We are constantly looking to grow our existing programs and come up with new programs.

One of the areas that we’re looking to focus on in Israel is the religious needs of American olim. Aliyah can be a very challenging experience, particularly for families. There are other organizations that deal with the economic and administrative aspects of that, but to some extent some olim sort of get lost religiously. The type of kehillos they have in Israel are different than what we have here and what they are used to.

That’s an area where we’re looking to expand our services, to try to help the religious nature of olim living in Israel.

May you have much success in your new position.