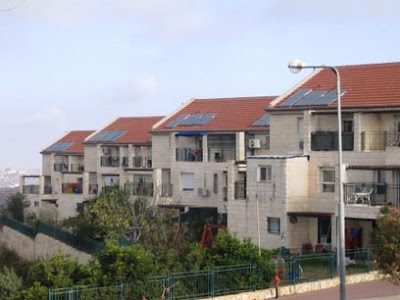 Last Thursday, a Knesset vote torpedoed the Settlement Regulation Bill proposed by MK Zevulun Orlev (Habayit Hayehudi), Givat Ulpana's 30 families' last hope to remain in their homes.). According to Orlev's bill, West Bank Arabs who failed to challenge construction on land they claimed to own within four years would have lost the right to do so. With the bill defeated, the Beit Ulpana must be evacuated by the 1st of July.
YOU CANNOT FORCE SOMEONE TO SELL HIS LAND
Last Monday, hundreds of West Bank residents began a protest march from Beit El. Their destination was a protest tent outside Jerusalem’s Supreme Court where dozens of Beit Ulpana residents were staging a hunger strike.
During Wednesday’s vote, hundreds of supporters of the bill demonstrated nearby blocking a number of nearby roads, while dozens of others set tires on fire in an attempt to block Highway 1’s entrance to Yerushalayim. Mounted police with swinging clubs drove them back and at least eight demonstrators were arrested. Many activists blocked the entrance to the Knesset building after the vote, as security officers struggled to keep them from entering.
Addressing the Knesset before the vote, Orlev severely criticized his opponents, arguing that destroying the homes of Givat Ulpana was as drastic a symbol of disunity as the cannon that destroyed the Altelena (a ship carrying arms for Menachem Begin’s forces in 1948). He also pointed out that eight years ago, this day was the exact day the Sharon government voted to expel the 8,600 residents of Gush Katif. Orlev tried to prove that the bill would not be opposed by international courts and argued that failing to support it would lead to the expelling of thousands of Jews from their homes.

But all his pleadings and arguments were in vain. 69 Knesset members voted against the bill, 22 voted in favor, and more than 20 abstained. In fact, the vote was little more than a formality. Its outcome was known in advance largely due to Prime Minister Binyamin Netanyahu’s threat two days earlier, that any minister supporting the bill would be fired, while other MKs could vote as they saw fit. Netanyahu explained that the government’s official position was to evacuate the five Beit Ulpana buildings by the end of the month in accordance with the ruling of the Supreme Court.

Recently, Netanyahu has spoken of literally sawing the Beit Ulpana buildings from their foundations and moving them to a former army base nearby, a project that would take a year at the cost of about 14 million shekels. The idea is regarded as absurd. Learning from the experience in 2005, when it took a year to move five historical houses in Tel Aviv a mere ten feet at the cost of 24 million shekels and that was over flat land.

Netanyahu’s threat split the votes of many parties. Not one minister or deputy minister supported the bill. Even a number of Likud ministers who had pledged to support the bill even if it cost them their positions absented themselves at the last moment, some arguing that their votes would in any case have been in vain.

Rav Ovadiah Yosef ruled that Shas MKs should vote in favor of the bill, but allowed the Shas Ministers to absent themselves from the vote to avoid being fired.

Explaining Shas’s basic support of the bill, Housing Minister Ariel Attias compared the Givat Ulpana situation to a sugya in the Gemara.

“Rav Ovadiah explained after the tefillah why the law deserved support had there been freedom to vote,” he said. “It was a matter of monetary halacha. The Torah speaks of a case where someone takes another person’s beam and uses it in his building. If the original owner wants to remove it and destroy the building, halacha says that one only needs to pay for the beam and does not need to destroy the building. Rav Ovadiah said that according to halacha and the Gemara, one should compensate the owner with money and not destroy the buildings.”

“Should we have made a coalition crisis because of this story?” Attias added. “Certainly not! We have things certainly more important than five buildings in Ulpana.”

United Torah Judaism decided that each MK vote according to the ruling of his spiritual leader. Yisroel Eichler, backed by the Belzer Rebbe, supported the bill.

“The state has removed rulership from the voted representatives of the people to the officials of the judiciary,” he said. “This is dictatorship and destruction of democracy. Anyone concerned about democracy must help that the Supreme Court be relieved of rulership.”

MKs Moshe Gafne and Uri Maklev of Degel Hatorah absented themselves from the vote after spending an hour discussing the issue with Rav Aharon Leib Shteinman. Rav Shteinman argued that the bill opposed halacha, since it involved a prohibition of taking land from an owner who openly opposes it.

“Since the state did not claim the Arab is not the owner of the property, and the person holding the land does not claim it belongs to him, if so, to take the land from the Arab is forbidden. How can you make a law to take land from someone? This is a case of talyuhu vezavin (forcing someone to sell his property),which is forbidden. It is a chillul Hashem to make a law to take something that belongs to someone else.”

Would you otherwise have supported the bill?

Was there a negative reaction to your vote?

“Obviously, there are people who think we were playing politics and not basing ourselves on halacha. If not for halacha, things would have turned out differently.”

As for Rav Ovadiah Yosef’s comparison between destroying Beit Ulpana and tearing down a building with a stolen beam, Maklev said that it is easy to differentiate between returning a stolen beam and returning stolen land.

In a press conference after the vote, Netanyahu defended his opposition to the proposed bill.

“Israel is a law-abiding democracy,” he said. “As the prime minister, I am obligated to both adhere to the High Court’s orders and maintain the settlement movement. That is not mutually exclusive. Nevertheless, this is not an easy day. The decision to relocate homes is never an easy one, even when only five homes are involved. This is not something the government relishes doing, but the court has rendered its ruling and we must respect it.

“Those who think the legal system was used to ram the settlement movement are wrong,” he continued. “Beit El is not getting smaller — it’s getting bigger. Beit El will be expanded, with 300 new families joining it.”

“I have unequivocal legal opinions that say that the verdict did not set any precedent and will not affect other cases,” he added. “Passing this bill would have hurt Beit El. The plan I outlined — relocating the disputed homes, bolstering the settlement movement and providing legal protection against legal precedents — reinforces the settlement movement.”

He concluded with the claim that taking everything into consideration, he has done his best to support the settler movement.

This week, Netanyahu added that the principle guiding him was Begin’s reaction when Ben Gurion shelled the Altelena and Begin did not allow the men on his ship to shoot back.

“Menachem Begin set down a principle — there will be no civil war,” Netanyahu said. “The principle he set down at the dawn of our independence has stood for 64 years. It is in force today; it is always in force. We have one state, one regime, one law in the state of Israel. The government and only the government determines the policy, and in the state of Israel, the law binds everyone, including the government, including the prime minister.”

In an ironical counterpoint, Yerushalayim council member, Yael Antebi, sent a letter to Likud ministers asking why they do not act just as staunchly to protect building laws in Yerushalayim.

“In continuation of your steadfast determination to protect the rule of law in Israel, as expressed these days in honoring the court’s decision regarding the Ulpana neighborhood in Beit El, I wish to inform you that in the Jerusalem [Arab] neighborhoods of Shuafat and Anata, the law is not enforced in several issues,” Antebi wrote.
She pointed out that Arabs of these neighborhoods build multi-story buildings on public land, harass the public almost every night with noise from mosques, banquet halls, and fireworks, and provide housing to thousands of illegal Arabs from Yehuda and Shomron, all this with little interference.

“My feeling,” she wrote, “is that both the Prime Minister and you revere the rule of law only when it comes to Jews and prefer not to deal with Arabs.”

TEN NEW HOUSING UNITS FOR EACH ONE DESTROYED

On the day of the vote, Netanyahu promised that a mechanism will be formed to deal with future Palestinian claims to land in petitions to the High Court. He also said that from then on he would be heading a new ministerial committee to deal with settlement affairs. Until then, such affairs were almost exclusively in the hands of Defense Minister Ehud Barak, who is no friend of those living in the West Bank. Recently, in the absence of an Arab peace partner, Barak has been advocating Israel’s unilateral pullout from the entire area.

To soften the blow of the bill’s defeat, Housing Minister Ariel Attias promised to authorize the building of 551 housing units in Yehuda and Shomron, 117 in Ariel, 92 in Maaleh Adumim, 144 in the Adam settlement, and 84 in Kiryat Arba, (although it was pointed out that those in Adam are already under construction for the past few months). This was in addition to nearly 300 units already promised in Beit El. It so happens that the Yerushalayim city council is also seeking to authorize the building of 2,500 additional housing units in the Giloh suburb of Yerushalayim that lies over the Green Line.

“For the settlers, according to this deal, it pays that they tear down the homes, because they will receive much more,” said Attias.

This promised building in the West Bank raised fierce condemnation from the international community.

“We do not accept the legitimacy of continued Israeli settlement activity,” U.S. State Department spokesman Mark Toner said, “and we want to see both parties refrain from these kinds of actions and to get back into negotiations.”

Chief Palestinian negotiator Saeb Erekat also condemned the promised construction, saying, “This is a very grave development, this undermines all efforts to revive the peace making between the two sides.”

Besides Givat Ulpana, the defeated bill leaves other settlements in immediate danger including Beit Assaf (25 families), Migron (48 families), and Amonah (50 families). On the other hand, about 13 unauthorized settlements not built on private land have been ratified or are being ratified by the government. These include Sansenah, Rachelim, Beruchin, Givat Haberechah, and Shevut Rochel.