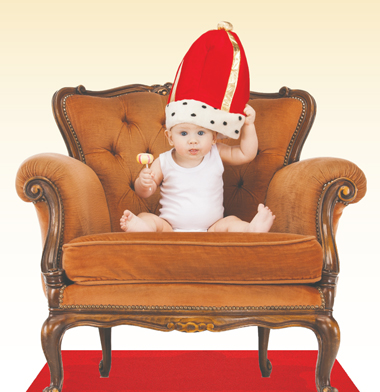 Some time ago, my son and daughter-in-law created a set of DVDs for kids based on some of my stories that have appeared on these pages over the years. They filmed a cast of children acting out these stories, added some lively music, and brought the stories to vivid life, to the delight of viewers everywhere. (The DVD’s, entitled “Meet the Family” and “Here We Go Again” are still available at fine Jewish bookstores everywhere.) The label on these productions is “Little Stars”… a name I’ve decided to borrow for the purposes of this column – with one important change.

Every child who’s born into a loving family enjoys all the benefits of being a “little star.” Cherished, cooed at and fussed over, a baby can be forgiven for thinking itself the absolute center of the universe. Each time its needs are met with alacrity and consistency, a feeling is reinforced inside that child: I am worthy of love. I will be taken care of. I don’t have to be afraid.

The problem is that some children become addicted to the “stardom” of their earliest years. They can’t tolerate anything else. Unless those around them continuously find their every utterance utterly charming, they are cast down. They come to expect the world to instantly and automatically supply their every need. The failure of the world – or, more accurately, the people who populate their own little world – to do so spells Disaster. With a capital “D.”

Such kids will resort to tantrums, sulks or manipulation to get what they feel they need. In other words, they become little tyrants. The world owes them something, and they’re going to make sure they get it!

Let me put it another way: Big tyrants are often little tyrants who never quite finished growing up; they never outgrew their infantile illusion that they are the center of the universe.

A “tyrant” is someone who feels an overweening need to control her environment. She longs to have everything “just so.” Whether that need exhibits itself as a mania for neatness or in a tendency to verbally bully those around her into submission, she can end up terrorizing her family and friends in her endless quest for the safety.

When the world aligns itself in accordance with her notions, she feels comfortable. Safe. Secure. When it doesn’t – fear invades. Helplessness reigns. Since she never developed her internal senses of security, she reverts back to the feeling of the vulnerable baby dependent upon the people in her life to make her feel safe. And feeling that way makes her angry. So she builds an arsenal of tyrannical defenses.

Tantrums, tears and hysteria… or coldness, criticism and harshness. Sometimes a sour face is all it takes to make her feelings known. The implicit message: “I want things done my way… or else!” It’s a picture drawn in jagged crayon by a small child who never got past her immature vision of the world as a place that must fulfill her every need… or else.

While the external behavior may be aggressive, it usually bubbles up from a place of inner weakness – a sense of vulnerability to the terrifying power of the big, bad world. In other words, from fear. It can be a practical fear, as in avoiding a danger, or it can be the fear of getting it wrong. Of being judged and found wanting.

I’ve known people like this. People who set the terms and conditions of their lives, and the lives of those around them, with the exacting demands of a sergeant-at-arms. Men who keep a running mental tab of everyone who ever crossed or hurt them. Women who go into meltdown mode when their spouses or children refuse to conform to their vision. These are small children inside grown-up bodies.

By the time a person reaches maturity, a number of important lessons have been learned. One of these is that we are no longer infants; we don’t have an infant’s vulnerability, and therefore no longer have the expectation of instant conformity to one’s wishes. We’ve learned to see others as separate individuals, with minds of their own. We’ve learned to tolerate and even respect people who are not like us and who do not always fall in with our way of doing things. The “other” is not the enemy, but actually kind of interesting and even a potential friend!

You’d be amazed by how many people regard their nearest and dearest, at least some of the time, almost as antagonists. A mature adult does not fall into this trap. Having someone in your life who doesn’t share your exact vision of how things “should” be is not a threat. At worst, it’s an annoyance. At best, it represents a chance to compromise, to enter into each other’s world, to grow together. It’s all in the way you look at it.

A mature person has a healthy fear of what life can throw at her – but it’s a grown-up fear. She finds the courage to forge on despite it. She does not collapse in fear or fury when things don’t go her way. She neither expects nor demands that her family, or her social circle, or the people in her workplace, behave in strict accordance with her vision.

She knows better than that. Control is in the hands of only One Being, and that is certainly not us.

What to do if you discover in yourself an impulse toward tyranny? If fear rises up, and control seems absolutely necessary, and you’ll do just about anything to achieve it?

First of all, it helps to remember that there are rules. Civilized people simply do not shriek like a banshee – or a toddler – when their wishes are crossed. Not even at their husband or children. Especially not at their husband and children. Simply agreeing to live by society’s rules for grown-up behavior can help curb our more uncivilized tendencies. We want to be able to look in the mirror each evening, knowing that we’ve behaved like a reasonably mature adult that day.

Every mother and father knows how to take a step back and figure out what constitutes the “greater good” for the family as a whole. When one child makes a demand that runs counter to that good, the parents will nix it. In a similar fashion, we can learn to parent our own childish impulses. Venting, criticizing or going into an emotional tailspin may feel good in the moment, but is it helpful to the big picture? How will it affect my character? What will it do to the long-term wellbeing of my loved ones? Is it really worth it?

Frequently, we’ll decide that it’s not.

The third thing to remember is that controlling the world is not our job. Not only is it an impossibility, but trying to do so is also a sign of a less than perfect trust in the One Whose job it is.

The little tyrant within us wants what we all want: love, security, admiration, comfort. She’s just forgotten how to ask for them nicely, and Who’s really in charge of providing them.

When the fear threatens to overwhelm you, picture yourself, your family and the whole world nestling securely in the palm of Hashem’s hand. Is there any safer place? And if Hashem loves you, is there any need to fear anyone else’s judgment?

Though we are no longer infants, no longer at the center of the world, no longer in command of a staff of “servants” ready to snap to attention at our slightest whim – we do have a loving, giving Parent. With Him on our side, fear and anxiety are inappropriate. You are my Father, my G-d, the Rock of my salvation!

What more could one ask?