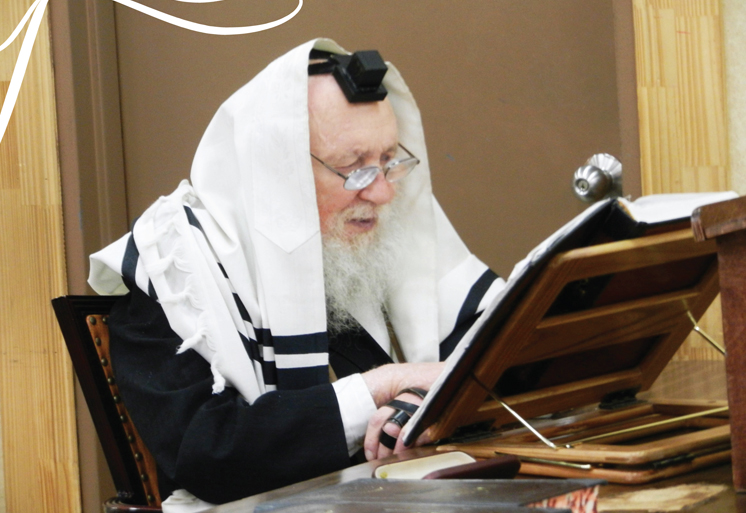 For anyone who ever merited to meet or see Rav Yosef Rosenblum zt”l, it is impossible to forget the light of Torah, of ahavas Yisroel, of undiluted purity that shone from his face. That this light has gone out is an irreplaceable loss. From whom will we now learn the true and proper way of living as a Yid in every aspect of our lives? From whom will we seek wise Torah counsel and chizuk in all areas of life? We are reeling from the blow, but let us at least remember not only who he was, but also what he taught us, and in that way at least in some tiny measure try and keep some of his lessons alive for future generations.

For many years, Rav Rosenblum’s yeshiva, Yeshiva Sha’arei Yosher, would spend the summer months on the campus of Yeshiva Ohr Hameir in Peekskill. Since the bais medrash level of the Peekskill yeshiva was still in session until Av, the Peekskill bochurim would merit being in close proximity of Rav Yosef for the month or so when both yeshivos were together.

As someone who learned in Peekskill for 12th grade and first-year bais medrash, I can still vividly picture Rav Yosef sitting outside with his Gemara for hours at a time. He would sit there (they said the sunlight was good for a condition he had), the pleasure of his ability to learn uninterruptedly shining from every pore of his holy countenance. We would watch him and marvel at the palpable bliss he displayed at being able to simply sit and study Hashem’s Torah.

A talmid of Rav Aharon Kotler zt”l in Lakewood, one did not need to even hear Rav Yosef ever speak to understand that this was someone who’d absorbed Rav Aharon’s fiery bren for the Toras Chaim, the living Torah. Of course, for one who did merit hearing Rav Rosenblum speak about limud haTorah or about being mechanech children to Torah, this was brought into even further clarity.

In Rav Yosef’s view, there was no way that a child whose parents properly give over to him the true sweetness and beauty of Torah will find himself unequipped to fight the enticing dazzle of today’s superficial world. It may be a struggle, sure, but having been given the emes, the power, of our Toras Chaim, our eternal heritage, one will surely see through the fleeting nothingness and the myriad guises of the yeitzer hara that is wreaking so much harm on our youth. Rav Rosenblum was intimately involved with and acutely aware of the struggles of the younger generation. How can we expect them to have a fighting chance, he would cry out, if we do not equip them with an awareness of the awesomeness of what we have?

Rav Yosef well recognized the power of the street. He understood the true power of Torah and Yiddishkeit, though, and knew how, when fully unleashed, it would always emerge victorious.

While countless stories about Rav Rosenblum and his tzidkus will surely be told, this author would like to retell one incident that I merited to learn about firsthand. There was a bochur in the Peekskill yeshiva who had decided – for whatever reason – that he would do better if he switched to one of a few other yeshivos. He was having a difficult time deciding between the few options under consideration. This boy’s father had a relationship with Rav Rosenblum and had sought his advice numerous times in the past.

It was summertime, towards the end of the zeman, and the boy’s father realized that the ideal situation had presented itself. The boy could surely use Rav Yosef’s advice and hadracha, and Rav Yosef was right there in Peekskill at the time! With one quick phone call, the bochur’s father figured, it could be arranged for the bochur to meet with Rav Rosenblum right where they were and work everything out.

Rav Rosenblum’s response, however, was a life’s lesson in middos tovos, tzidkus, and in thinking through every action one takes, no matter how seemingly trivial.

While Rav Rosenblum indicated that he would be more than happy to meet the boy and discuss everything with him at length, he informed the father that there is no way he could do so in Peekskill. “When our yeshiva rents space by another yeshiva,” he explained, “I am a guest by them. Would it be right for me, while I am renting from them and a guest in their place, to meet with their bochurim to advise them about leaving? How could I do such a thing?”

The fact that the bochur was leaving in any case and all he wished to discuss was which of a few yeshivos he would best gain by joining made no difference to Rav Yosef. It simply was not right, he insisted.

Indeed, a week or two later, when Rav Rosenblum was in Brooklyn for Shabbos and the bochur was home that Shabbos as well, the boy met Rav Yosef, who gave him all the time he needed and advised him as to which yeshiva he felt would be best suited for him.

When I learned this story from that boy as he was going through it, I realized that besides giving hadracha for where to go in the immediate present, Rav Yosef had imparted a lifelong lesson in how a Yid’s every action must be thought out and measured, and must meet the highest standards of integrity.

Rav Yosef had little need for “discussions” unless they were clearly directed at a concrete action. “Meetings,” he once said, “zenen far trinken l’chaim.” They are nice venues for social gatherings. For the most part, one who really wants to get something done would take care of it with little need for talk, attention, publicity, coverage, etc.

In the same vein, the way things were discussed or presented meant little to him. What counted was the emes, the way something really was. When it came to looking into chadorim and schools for one’s children, he put a lot more emphasis on what was accomplished there than on the “image” any particular institution might give off.

When this author once asked him about sending to a certain school that did not necessarily have only the best crowd, he asked me, “And when you went to school, it was kilam ahivim, kilam beririm? (Everyone was so perfect?)” If the crowd translated into the type of chinuch given there, perhaps that would be one thing. If one could be assured of a pure Torah chinuch, then names and labels were insignificant.

Rav Yosef advised thousands of children, teens, individuals, couples and families over the years. Though his own purity and goodness was without compromise, his love and concern for others allowed him to truly understand and relate to the situations of others, no matter how dreadful. He counseled with a warm smile and a firm hand, and brought many, many situations back from the brink.

He cried for the many singles who are having trouble finding their bashertes, and it pained him even more that the most obvious solution was not even being addressed. While man can make cheshbonos this way and that, he explained, and some may be right and some not, what is indisputable is that Hashem is the mezaveig zivugim and with His help anything can happen. How can it be then, he asked, that our most important focus in solving this issue is not on seeking Divine assistance by treating this entire parsha the way Hashem wants us to?

The way a couple goes out, the way they behave before, during and after an engagement, the way shidduchim should (or should not) be discussed publicly and privately, the way a bas Yisroel should be treated, the way a ben Torah should act, these are what can find Divine favor, and who can question whether Divine Will could solve even the most intractable problems?

When Rav Yosef heard about a certain seedy area that claimed numerous frum Jews as victims, he went to great lengths – at much expense to his health and without regard to the negative remarks of others – to clean up the situation. Though it was not in any way his responsibility and many others should have seen to it far earlier, his concern for the well-being, physical and spiritual, of each and every Yid would not allow him a moment’s peace until he knew that he had done all that he possibly could.

A while later, when the area was ostensibly cleaned up and a huge sale was being held there, I asked him if it was okay for my family members to go there. Rav Yosef was quite cognizant of the financial situation of the average yungerman, and a substantial savings was not something of which he would make light.

Rav Yosef, however, looked at me with pain-filled eyes and said, “M’hut geharget mentchen durten. (People were killed there.)” A fellow Jew’s spiritual death clearly pained him no less than a physical one. “Would you go to a sale held in Auschwitz?” he asked. “Even if you could save a lot of money?”

There was no need for him to tell me whether I could or could not go. Seeing his very real pain was a lesson in itself, worth far more than any sale.

Chinuch of the
Next Generation

Perhaps nothing was as dear to Rav Rosenblum as the chinuch of the next generation. When he was well in his years, weak and unwell, he used his last bits of strength to work on practical ways to strengthen the chinuch of our next dor. He begged, he pleaded, he cajoled, and he did his utmost to impress upon everyone the importance of ensuring the purity of our Torah chinuch.

He understood when less-than-normative measures were necessary, and when one must withstand outside forces and keep to the pure message of the inherent power of Torah itself. However it was to be accomplished, one thing was clear: There was nothing, in Rav Yosef’s eyes, as pure, as precious, as powerful, and as dear as Torah and Yiddishkeit.

Rav Yosef’s petirah leaves a void we cannot fill. Let us try at least to absorb some of what he taught, and remember the purity of the way he lived.