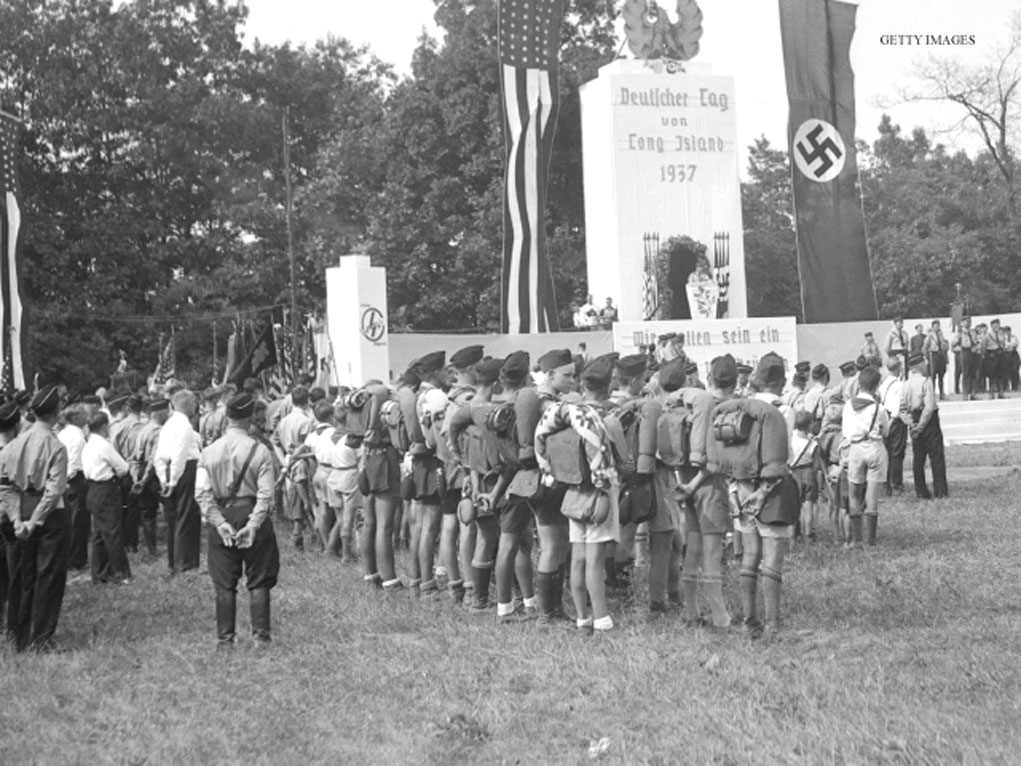 It can’t happen here. This wishful statement has been made about many things, amongst others the proliferation of Nazism. Yet, it actually already did, just a bit under 90 years ago. Although I’ve been writing and lecturing about Churban Europa/the Holocaust for many years, this incredible story has just come to my attention. If there weren’t ample evidence, I might also be one of the deniers that a sleep-away camp in Long Island trained young children to become Nazis from 1935 until 1941. The astonishing story of Camp Siegfried in Yaphank, Long Island seems like a horror tale born of some twisted anti-Semitic mind. Yet, for six years, American children walked up and down Adolf Hitler Strasse – Hitler Street – goose-stepping past other avenues named after Joseph Goebbels and Herman Goring. There were swastikas galore, the promise of an “Aryan Paradise,” daily singing of the “Horst Wessel Lied,” the Nazi anthem, while the camp loudspeakers “spewed anti-Semitic speeches.”

I shudder when I think of the wonderful days in my camping years, when Torah songs emerged from the P.A. and we rested on the grass on Tisha B’Av listening to stories of the churban. Yet, in Yaphank, Long Island, books by the evil Julius Streicher, publisher of the “virulently anti-Semitic Der Sturmer” were distributed to campers. How could this happen?

A recent article (Sunday, November 20, 2022) in Newsday, the Long Island newspaper, refers to this anti-climatically as “a dark time in Long Island’s history.” As the article, several books and even an Off-Broadway play entitled “Camp Siegfried” reveal, “Camp Siegfried began…when the German-American Bund – a domestic pro-Nazi group” bought a farm to promote Nazism and inculcate children in its degenerate ways. To be sure, J. Edgar Hoover, long-time director of the F.B.I. investigated the camp, but he never took it seriously. To put all this simply, if not for several obvious nissim, an entire generation of American children could have been poisoned by the same toxic propaganda that brought about the murder of six million of our brethren.

One of those moments of Hashgocha was the opening day for the camp in 1938, when 40,000 people were expected to arrive to “celebrate” the camp’s success. Instead, police raided the camp and arrested a number of its leaders. They stood trial in early July that year and were brazen enough to declare that every child in the camp knew how to salute like Nazis, uttering the now-hated phrase “Heil Hitler,” which Martin Wunderlich, one of the camp leaders, proceeded to demonstrate proudly.

Thank G-d, Camp Siegfried is no more and is now known as Lakeview Village. Hitler Street is innocently called Park Boulevard and the only negative words one hears now in the neighborhood is that there is “a bad vibe.” However, after hearing, seeing and even reading all this, it is hard to say with a straight face that “it can’t happen here.” With anti-Semitism at an all-time high, this is another reminder that Eisov sonei l’Yaakov is a given and we must internalize each new revelation as a sign from Heaven.

What does this demand of us as Torah Jews?

We are now laining the parshiyos of how Yaakov Avinu prepared his children to resist the baleful influences of Lovon and Eisov. We recite in the Haggadah that “Lovon tried to destroy everything,” and indeed he claimed that Yaakov’s children had already been hopelessly infected by his own philosophies and iniquity. In our time, we seem to have temporarily had a setback in the fight to keep the government and our enemies (sometimes one and the same) from meddling and distorting our mesorah, kedusha and taharah. It is not only Nazism and Communism that try to destroy us. It is sometimes the seemingly benevolent secular politicians who claim to “mean well” who are as dangerous to us as outright Nazi camps singing anthems of destruction and waving flags of spiritual and physical death.

Therefore, our first commitment must be fortify ourselves inside our teivah, as Noach did, and salvage as much as we can. Even when some seem to be “left behind,” we cannot water down, let alone relinquish, one iota of our unbroken tradition. Secondly, we must make sure that every Jewish child can go to a kosher camp, regardless of their ability to pay. The Nazi camp must remind us how important summers are to our precious youth, and we dare not leave to chance and financial status the ability to offer a summer of Torah and total Yiddishkeit absorption. I write this now, before Chanukah, because obviously June is too late. Just as we must make sure during Elul that every Jewish child is registered in a proper yeshiva or Bais Yaakov type school, so must our streets not be filled with children who have no place to go on hot summer days.

Furthermore, we must remember the story Rav Chaim Kanievsky used to tell of his walk with his uncle, the Chazon Ish. They were of course talking in learning when the Chazon Ish stopped and marveled that “in this place, talmidei chachomim learned Torah.” Rav Chaim later revealed that his uncle had stopped at Ezra Street in Bnei Brak where, indeed, bochurim used to sit and share Torah outdoors. The Chazon Ish’s sensitive antennae picked up the kedusha where others saw only a mound of dirt and pebbles. In Yaphank, there are remnants of Nazi malignance, but in Bnei Brak kedusha pops up everywhere.

I remember very vividly Rav Mordechai Gifter recalling movingly the street outside the city of Telshe called Navraner Veg. That, too, was a thoroughfare where words of Torah changed the molecules of the road, creating a virtual atmosphere of holiness. The rosh yeshiva concluded that this was what Yirmiyahu meant when he lamented that “the roads of Tzion are mourning” (Eicha 1:4). The very roads where “the pilgrims” went up to Yerushalayim mourned their absence and the mitzvah of aliyah l’regel they were performing. Rav Gifter’s tears when he spoke these ancient words were the most eloquent testimony we could require that we must change and uplift our surroundings and properties so that the inanimate objects themselves cry out that we are heading to good places to do great things.

The Baba Sali told Rav Dovid Abuchatzeira to move to Nahariyah because the Belzer Rebbe, Rav Aharon, had briefly sanctified the city with his presence. Yaakov Avinu left his roshem on Be’er Sheva, as has every tzaddik and tzadeikes who invested their kedusha in a previously secular place. But like Yaakov, we must carry spiritual armor and fortifications so that neither we nor our offspring are tainted by the depraved world around us. Rav Zusia of Anipoli (Sefer Menoras Zohov) relates an amazing story about the Baal Shem Tov. A gentile baal aggalah – wagon driver – was devoted to the founder of Chassidus and took him on many of his famous trips resulting in chesed and often open miracles. One day, this loyal driver became violent and threatening, with no immediate motive or explanation. Rav Zusia revealed that this happened on the exact spot where Kayin had killed Hevel. Indeed, deeds carry repercussions for generations and even millennia.

I once wrote (Blueprints, page 177) about how the Mafia chooses young people who will later become cruel murderers for their organization. They identify a ruthless boy who willingly maims a homeless person or even shoots into his dead body. This is someone they will develop, train and incorporate into their murderous ways. The Nazis were mechanech, lehavdil, young people on Long Island who were already predisposed by ancestry, geography and home schooling to become the anti-Semites of the future. Boruch Hashem, their machinations were thwarted before they could cause much harm in the United States.

We, on the other hand, must strengthen and not allow others to weaken our unique chinuch system and connection to our avos and imahos. It is that precious connection that will allow Klal Yisroel to maintain our unique identity in golus until the geulah sheleimah bemeheirah beyomeinu.