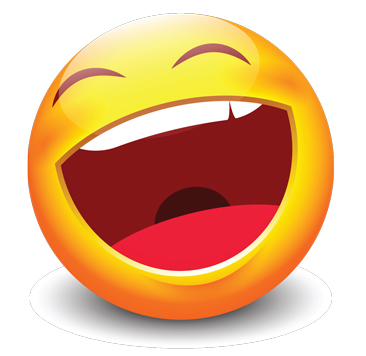 Come, let’s laugh a little at the topsy-turvy world that we live in. It’s good for you. It’s healthy for your neshoma. For when you are living in a world full of sheker, where the leaders and spokespeople are so confidently steering their followers in the wrong direction and they enjoy success, it can get very disheartening. You begin to wonder if perhaps your own thinking is a bit off. But when the rare opportunity arises and their foolishness and hypocrisy are revealed for all to see, we may snicker at them just enough to strengthen our own convictions.

If my memory serves me well, just a couple of months ago, at one of the presidential debates, Donald Trump was asked, “If your opponent wins the election, will you accept her as president and support her?” Mr. Trump responded truthfully that he would have to wait and reserve judgment for when the results were actually in. As soon as the debate concluded, the media was beside itself with criticism of Mr. Trump for declaring that he wouldn’t accept his opponent as the country’s leader. Of course, he said nothing of the sort. He meant that he would have to see if polling was fair and not rigged. But in order to obfuscate the fact that he did well in the debate, journalists had to create this lie, focus on it, and castigate him for it.

There were headlines around the world that Trump refused to support his opponent if elected. Liberal commentators pompously declared that he had undermined a basic fundamental American right of free elections, and this statement alone clearly showed that he was unfit to be president. In addition, Mr. Trump was regularly taken to task for his aggressive style and ungentlemanly-like behavior.

Fast forward just a few weeks later. Mr. Trump has won a stunning victory. The electorate has spoken and sent a clear message that they want a leader who will put this country back on its feet again. And what is the reaction of those who back Mrs. Clinton? Protests, demonstrations, vile denunciations of the president-elect, and violence. People wearing hats and t-shirts with logos supporting Trump have been physically attacked.

Lo and behold, the very same news media that lambasted Trump for undermining the right of citizens electing the president were now encouraging these protests. Senate Minority Leader Harry Reid wants to do away with the Electoral College. New York City Mayor Bill de Blasio, smelling political gain, declared that the city will not abide by Trump’s policies. There was nary a protest against the uncivil behavior throughout the country in reaction to Trump’s victory.

Come, let’s chuckle a bit more about the poor high school and college students around the country who are suffering anxiety over the election. They are being sent to specially designated cry-rooms for some relief. Others are using coloring books and aroma therapy to calm their nerves. They are terrified that under Trump, the world is coming to an end. One young man cried at the post-election meeting of Democrats that Trump’s lack of concern for climate change will cut forty years off his life.

It’s humorous, though pathetic. These poor souls are genuinely alarmed, frightened by global warming and their perceived discrimination against minorities. Yet, they are totally oblivious to the real threat of open borders, jihadi terrorism, unemployment, a lagging economy, and threats posed by countries overseas. What can they possibly understand when their minds are preoccupied with Pokémon Go and their smartphones? They have been indoctrinated with the nonsense that they hear from their college professors who are so out of touch with reality, progressives who try to obscure the boundaries between right and wrong.

Look, that’s funny. The New York Times is down on its knees doing a mea culpa, apologizing to its readers for biased reporting on the election. Its publisher promises to dedicate himself to “report to America and the world honestly without fear of favor…” Are you really sorry, Mr. Sulzberger, or is it the loss of readership that you’re worried about? “Like the shame of a thief when he is discovered” (Yirmiyahu 2:26). It’s been a while since your paper has started shrinking in both size and circulation, so this confession is borne out of desperation, having been shamed by the election results.

Even if this contrition were heartfelt, it’s difficult to repent for many decades of biased journalism. Unfortunately, the original publishers, the Sulzbergers and the Ochses, assimilated Jews, rarely printed Jewish news, as they did not want it to be thought of as a Jewish newspaper. Throughout the Holocaust, most of the horrific news about the fate of our brethren wasn’t published. In one instance, the verified account of the deaths of two million Jews rated on page 10 (see Thy Brother’s Blood by David Kranzler, page 124). But the Times still sees fit to publish articles that paint Orthodox Jews in a negative light. So we can be excused for our glee at their misery.

Incidentally, their penitence has been short-lived, as they continue to write negatively about the president-elect, hoping that he doesn’t succeed in making America great again. Every day features baseless, contrived problems about the incoming regime just to stir controversy.

The news media and college professors are prime examples of the power of Eisav: “Ki tzayid befiv” (Bereishis 25:28). Rashi explains this to mean that he was adept at trapping people with his mouth. He used his verbal abilities to make himself look more righteous. This is precisely what the writers and academics have been doing for decades. They have used their verbal and literary talents to articulate nonsensical ideas, and their naïve audience has gobbled it up.

Amidst the darkness of hester ponim and sheker, let’s bask in the light of daas Torah by reading the words of the holy Steipler Gaon, Rav Yaakov Yisroel Kanievsky. He writes, “If one will ask: How is it feasible that totally worthless and nonsensical ideas are accepted as fact by thousands and millions of people, amongst them talented and educated people? Know that the force of education and propaganda is extremely potent. The lies and nonsense aren’t accepted suddenly, but rather gradually, in stages.

“At first, an idea is taught to children of a particular place in an entertaining way that appeals to the child’s imagination and interests him. Slowly, but surely, the false ideas spread from place to place and from country to country, taught in the form of children’s stories. As they grow older, the ideas are established in their hearts as the absolute truth. Afterwards, the perpetrators of these falsehoods bring this as a proof. Their ideas must be true, for if not, how could so many thousands and tens of thousands of people, amongst them brilliant minds, believe in this?”

As an example of this, the Steipler cites communism: “After the Bolshevik revolution, an evil man (Stalin ym”sh) came to power, murdering many thousands of people mercilessly, without any fair trial. Nevertheless, through constant propaganda, in the eyes of millions of Russians and in other countries, he was considered superhuman and one who had no peer on earth. Whoever doubted him was fit to be uprooted from the face of the earth as one who wanted to destroy mankind. Had we not witnessed this with our own eyes, it would be unfathomable how millions could believe in this.

“Until one day, the rulers that succeeded him decided that it would be prudent for them to abolish this ‘deity.’ Through mass propaganda, they eventually convinced the populace that he was a mortal, and a wicked, ruthless one at that.

“What can we learn from the adulation of such a tyrant? We can see to what extent the opinion of millions can be so unsubstantial and meaningless. It is all delusion of the masses, for their opinion has not been formed by reflection and discretion, but rather by joining the crowd and then claiming that the vast numbers that think this way are proof that it must be right” (Chayei Olam, Chapter 25).

“The wise man is greater than a prophet” (Bava Basra 12a). We are literally witnessing this today, as young innocent children in grade school, starting in kindergarten, are being subtly introduced to ideas of perversion and immorality. As they grow older, they are further poisoned with these thoughts by the media and those in show business. And this is how the greatest falsehoods are eventually stated as fact.

It would seem that the name Yitzchok Avinu, which implies laughter, is incongruous with his trait of din, which is associated with awe and a serious demeanor. But the seforim explain that the two are very much complementary to each other. Because Yitzchok Avinu is so in sync with the ultimate truth, he is able to laugh at the world, clearly identifying falsehood and seeing the physical desires and false ideas that stem from the yeitzer hara for what they really are: complete futility. This clarity and detachment from the whims of olam hazeh also bring inner simcha, implied by the name Yitzchok.

We, too, have to rejoice. As we watch the sheker spread in the secular world, we can take pride in spreading the truth. When our children are old enough to utter their first words, we teach them Modeh Ani, brachos, and Krias Shema, accepting upon them the yoke of Malchus Shomayim. On the lips of all parents are tefillos that their progeny follow in the footsteps of the avos and imahos in the ways of Hashem.

As long as we are in golus, we cannot laugh too loud, for the forces of evil, despite their stumbling today, will surely regroup and reinvigorate themselves. And as long as the geulah has not yet arrived, we can never be comfortable and assured that we won’t face hardships in doing our avodah. Only when we merit redemption will we see the fulfillment of the posuk, “Then our mouths will be filled with laughter and our tongue with joyful song” (Tehillim 126:2).