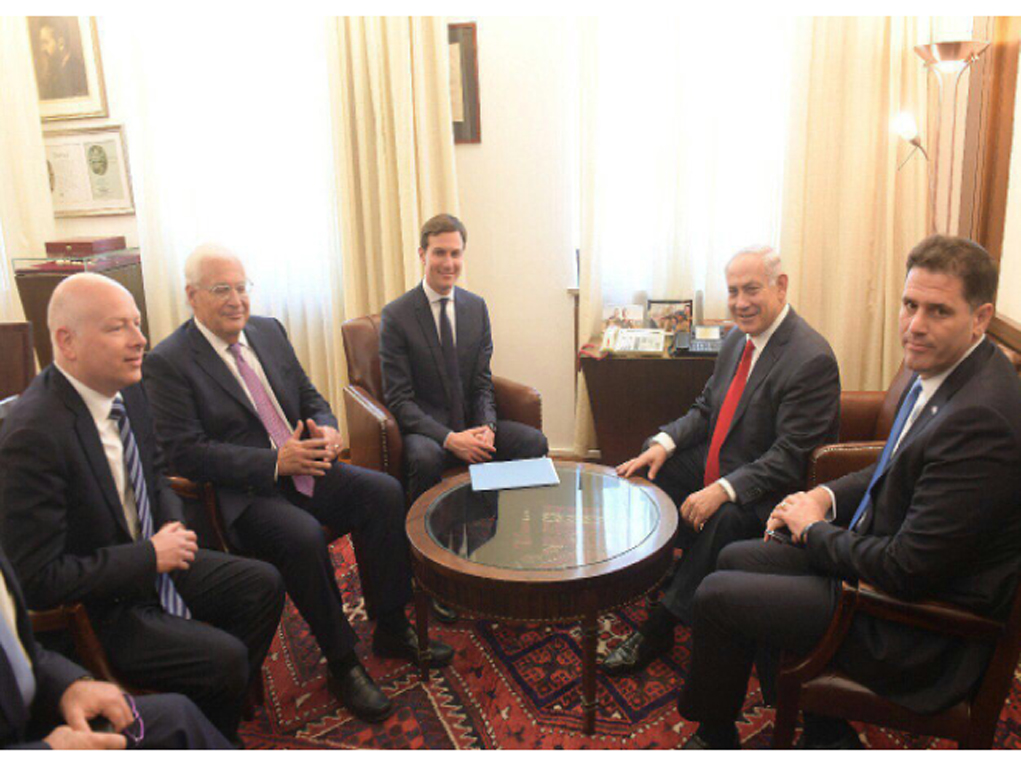 Prime Minister Netanyahu met with Jared Kushner in Yerushalayim last week to try and lay the groundwork for peace negotiations which broke down three years ago.

“This is an opportunity to pursue our common goals of security, prosperity and peace, and Jared, I welcome you here in that spirit. I know of your efforts and the president’s efforts, and I look forward to working with you to reach these common goals,” Netanyahu said.

Kushner was visiting Israel along with U.S. Special Representative for International Negotiations Jason Greenblatt, who met with Netanyahu a day earlier. Greenblatt also met with Isaac Molcho, Netanyahu’s envoy for negotiations with the Palestinians, and traveled to Ramallah to meet with Palestinian Authority President Mahmoud Abbas.

“There’s nothing [going on] behind the scenes,” he told Israel Radio. “Things are simple and transparent. Trump’s representatives are still in the learning stages…They want to understand what the parties are proposing, what the basic interests are, what the basic position is for both Israel and the Palestinians. We are open to dialogue with the Americans. The Palestinian issue is not a new issue on the Israeli government’s agenda.”

Kushner also met with Abbas in Ramallah to discuss the peace effort.

Greenblatt and U.S. Consul General in Jerusalem Donald Blome also attended the meeting, which the Americans stated was “positive and fruitful.”

Kushner and Abbas “reaffirmed their commitment to advancing President Trump’s goal of a genuine and lasting peace,” but both sides emphasized peace “will take time,” according to a White House statement.

“The meeting has deeply and clearly discussed all the permanent status issues, mainly refugees and prisoners,” said PA spokesman Abu Rdineh, who added, “During the meeting, Kushner told President Abbas that President Trump is committed to reaching a serious peace deal.”

A senior Palestinian official said a preliminary meeting Tuesday with Greenblatt became tense over the issue of the PA’s payments to terrorists and their families, The Times of Israel reported.

According to the official, the PA rejected an American demand to end the terror stipends and insisted on a freeze in Israeli construction in Yehuda and Shomron. Earlier this month, Secretary of State Rex Tillerson walked back a statement that the PA had agreed to end its payments to terrorists’ families.

The London based al-Hayat newspaper reported that Abbas and Kushner dissented over similar issues.

Abbas told Kushner that to payroll terrorists was “part of the Palestinian government’s social responsibility” and that Israel was merely using it as an excuse to delay peace talks. In return, the delegation censured Abbas for failing to censure the murder of a border guard at Sha’ar Shechem days earlier.

Al-Hayat added that Kushner complained about Abbas refusing to meet U.S. Ambassador David Friedman due to his positive stance on Jewish settlements and that Abbas rejected a U.S. compromise demand to stop payments to six hundred terrorists who are serving life-terms for murder.

Regarding incitement, Abbas wanted to restart a trilateral committee on incitement with Israeli, Palestinian and American representatives formed after the 1998 Wye River Memorandum, which met every two months until the Second Intifada that erupted in 2000.

A White House official dismissed al-Hayat’s report as “nonsense,” saying that Kushner “will submit his report to the president and, after it is submitted, President Trump will decide if there’s a chance for negotiations or it might be preferable to pull out of peace talks.”

Senior Palestinian officials told Haaretz that Palestinian leaders were greatly disappointed with the meeting and complained that Kushner and Greenblatt immediately raised Israel’s complaints over terrorist payments and incitement.

“They sounded like Netanyahu’s advisers and not like fair arbiters,” one Palestinian official said. “They started presenting Netanyahu’s issues and then we asked to hear from them clear stances regarding the core issues of the conflict.”

“We told them that that same day, Netanyahu’s government began the construction of a new settlement and is talking about building thousands of new housing units,” a Palestinian official said. “Abbas asked them what their position is on the subject but received no answer.”

A Palestinian delegation will reportedly travel to Washington, D.C., in July to continue talks with the Trump administration.

During his visit to Israel, Greenblatt tweeted that he visited the Kosel twice, paid a condolence call to the family of the border guard murdered at Sha’ar Shechem, Hadas Malka, and shared a meal with patients at an East Yerushalayim hospital. Regarding the latter, he thanked the hospital “for accommodating my kosher diet by providing me with fruit.”

Greenblatt also visited the Goldin and Shaul families whose sons, Hadar and Oron, were kidnapped during the last Gaza war and never returned.

In a special statement, he declared that he “remains outraged at Hamas’s inhumane refusal to return Hadar and Oron and supports the families as they continue to seek their sons’ return.”
Meanwhile, hundreds of retired Israeli generals and senior security officials warned that if the US passes the Taylor Force Act which would drastically cut PA funding unless the PA’s $170 million in terrorist payments stops, this might cripple the authority and enable extremists to seize control.

“Demanding that the PA ends incitement, continues fighting terror and upgrades security coordination with our forces – certainly,” they said in a statement. “Hindering the PA’s ability to do all that – absolutely not!”