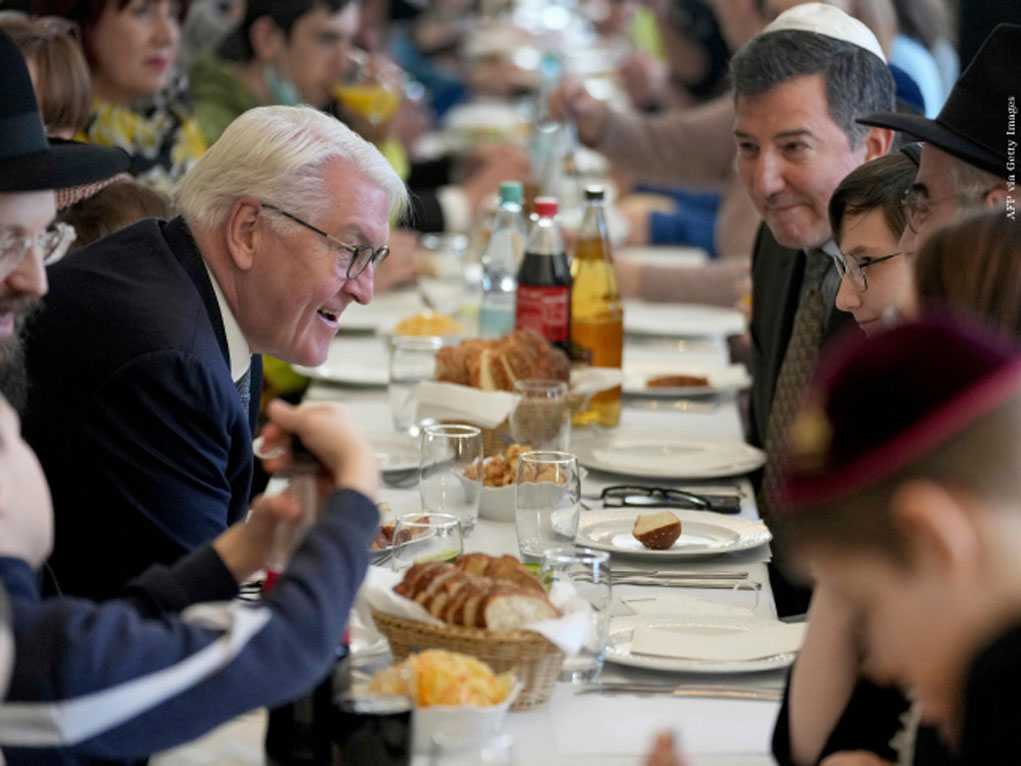 Day after day, the terror continues as the violence of war rages through Ukraine. When will it stop? But when we pause to look through the lens of history, we remember that the kur habarzel refines and purifies us, helping us scale heights that previously would have been impossible to reach. The reasons for cataclysmic events are beyond us, known only to Hakadosh Boruch Hu in His unfathomable wisdom. But the response is within our grasp, and we are enjoined to climb the ladder of areivus. And that is exactly the script that is coming to life in a most inspiring performance by Jewry around the world.

“Klal Yisroel is reacting to the Ukraine crisis in ways above and beyond what I’ve ever seen,” reports Rabbi Shlomo Noach Mandel, director of The Canadian Foundation for the Education and Welfare of Jews in the CIS (Commonwealth of Independent States). In an outpouring of concern, people are calling The Foundation to offer food, volunteers, psychological help, and financial assistance. Their eyes are trained on their Ukrainian Jewish brethren, and they want to do whatever they can to alleviate their dire circumstances.

There are thousands of stories taking place in the wake of this tragedy, stories that point to the resilience and courage of our people, individuals, and communities, who refuse to give up. As just one sample, Reb Yitzchok Kozlov, a graduate of the day school in Kyiv, was one of the leaders of the Karlin-Stolin communities in Kyiv. He and his family recently experienced a harrowing escape from Ukraine, and R’ Yitzchok is now doing lifesaving work by helping to man the crisis center in Pinsk under the guidance of Rabbi Moshe Fhima of Yad Yisroel.

R’ Yitzchok’s wife, Naomi, also a Yad Yisroel graduate, came from Belarus, so despite the tragic upheaval that they endured, Pinsk is not foreign to her. Immersing herself in klal work is also not foreign to her. When the couple lived in Kyiv, R’ Yitzchok set up a girls’ dorm that his wife managed. Creating and maintaining the dorm ensured that the girls attending Bais Yaakov would be able to keep Torah umitzvos by living in a frum environment.

With incredible siyata diShmaya and open nissim, fifteen of the girls from the dorm were able to escape Kyiv. They first arrived in Mezhibuzh before the war started, following the advice of the Karlin-Stoliner Rwebbe, who saw the writing on the wall and urged them to flee. From there, they crossed to Belarus. Unfortunately, half the girls stayed behind in Ukraine because their parents were too frightened to allow them to leave the country without them.

In all the places where the refugees have found asylum, including Belarus, Romania, and Moldova, the new immigrants are trying to pick up the shattered pieces of their lives and regain a sense of normalcy. The yungeleit are learning in kollel, and the children are studying in schools. The embers of Klal Yisroel burn strong despite unspeakable odds.

The revitalization of the former Soviet Union and the formation of a Torah infrastructure in this barren wasteland are astonishing. It started in the mid-1980s when Mr. Yissochor Dov (Albert) Reichmann began his involvement by helping refuseniks, many of whom were baalei teshuvah. The foreign minister of the Canadian government encouraged him to get involved in business in the Soviet Union so he could garner respect and have input in political decisions. Succeeding beyond what anyone envisioned, Mr. Reichmann established a relationship with Soviet President Mikhail Gorbachev. Hashem pulled the strings, Russia became more democratic, and Gorbachev allowed Jewish schools to be established in Moscow.

In 1992, to the world’s incredulity, the formidable Soviet Union collapsed. Seeing a window of priceless opportunity, Klal Yisroel sprang into action. The Vaad L’Hatzolas Nidchei Yisroel and Yad Yisroel, along with Operation Open Curtain, Ohr Hachaim, and many other worthy organizations, worked together to create Torah kehillos, founding shuls, yeshivos, Bais Yaakovs, and summer camps. Rav Shlomo Bakst, together with Rav Refael Kruksal, created the Tikvah community in Odessa, a network of vibrant kollelim, yeshivos, day schools, and an orphanage. A veritable wasteland of Torah Yiddishkeit was revitalized over the course of thirty-five years, spreading across former communist countries as far as Germany and Hungary. Each fledgling community had a parent organization that helped it grow until it became an independent Torah establishment. The Shema Yisroel organization in Canada evolved as the umbrella structure, overseeing and assisting the vast network of schools dotting the budding landscapes of the former Soviet Union.

As the current crisis continues, multitudes of dedicated, steadfast Yidden who turned over their lives to embrace Yiddishkeit have been forced to run for their lives. In response, many askanim, led by the chairman of Shema Yisroel, Mr. Efraim Reichmann, are endeavoring to help. They are assisting with the massive expenditures and are working with their partners on the ground to assist with the myriad details involved in coordinating such vast operations. They have helped facilitate the dangerous border crossings. Once people are safely across, they provide aid with housing, food, and other necessities. The outpouring of support by thousands of donors to campaigns such as those launched by Agudas Yisroel and the Orthodox Union, as well as major contributions from Klal Yisroel’s lay leaders, allows Shema Yisroel to be a meaningful force in helping its member organizations survive the current crisis.

Homes have been destroyed, but they can be rebuilt, and schools and shuls can be reestablished on different territory, challenging as that may be. But there are some things that can never be repaired or replaced. Heartbroken, R’ Yitzchok Kozlov described a living nightmare that just transpired. His former classmate, a close friend, was in a car that was overrun by a tank. When he and his child got out to escape, they were brutally shot and killed. Two lives. Two worlds. Decimation. Destruction. How to move on?

Thirty-five years of toil and devotion have been washed away in the senseless nightmare of war. A proliferation of Torah life, thriving infrastructures of shuls, botei medrash, and schools are no more. These were symbols of hope, verdant trees that flourished in what had been a barren wasteland for so many years. And yet, most of the devastation is superficial, excluding the crushing loss of lives for which there are no words to encompass the pain.

Chesed shel Hakadosh Boruch Hu sheshofach ka’aso al eitzim v’avonim. At the time of the churban, the gedolim realized that Hashem did chesed by pouring his wrath on wood and stones. The raging conflagration that consumed the Bais Hamikdosh, causing us to cry out in anguish, allowed us to live. Here, too, the buildings have crumbled. But our people, netzer mata’ai, will continue to sprout and blossom, basking in Hashem’s eternal love. These communities that have embraced a Torah life with incredible tenacity and mesirus nefesh will rebuild on foreign shores. And one day, may it come soon, Hashem will take His children by the hand and bring them home.