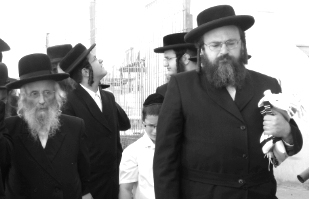 At 4:30 on Sunday morning, Yerushalayim police began a string of six arrests. Police first invaded the home of Rav Amram Shapiro, 45, personal assistant of the Ga'avad of the Eidah Hachareidis, Rav Yitzchok Tuvia Weiss, dragging him from bed at the unearthly hour of 4:30, ransacking his simple home, and confiscating computers and documents. Half an hour later, they arrested Shmuel Lubitzki, head of the Vaad Ha'artzi Tzedaka Fund, and four people connected with the fund in Yerushalayim and Bnei Brak. Two of the arrested were released shortly afterwards and returned home. Many suspect that the raid was not part of the normal maintenance of law and order, but an attempt to break the power of the Eida Hachareidis community.
OPERATION WHITE GOLD

Police said that the arrests are the culmination of operation “White Gold,” a months-long undercover investigation into the financial activities of the Vaad Ha’artzi Fund. Eidah Hachareidis members argue that Amram Shapira was arrested in retaliation for Rav Tuvia Weiss’s refusal to meet Yerushalayim Police Chief Niso Shaham in December last year in connection with the increasing number of Eida protests. Rav Weiss insisted that the Police Chief was to blame for much of the police hostility against Torah Jews and met with two lower ranking police officials instead.

“These arrests are personal attack against me,” he said. “If they want, they should come and arrest me!”

As the Gaavad’s personal assistant, Rav Shapira is regarded the most powerful layman in the Eida community. Eleven years ago, when Rav Yitzchok Tuvia Weiss was appointed Ga’avad of the Eidah Hacharedis and told he would be provided with an assistant, he said he was not interested in a macher.

“If you want me to have an assistant,” he said, “bring me a talmid chochom I can speak to in learning. I don’t want a politician or someone with independent agendas.” And after meeting Rav Shapira he said, “This is exactly what I was looking for.”

From then on the two were constantly together to the extent that people say, “If you see Rav Amram, it’s a sign that the Ga’avad is on the way.” They also learn daily b’chavrusah that can extend for hours.

Later Sunday, at the conclusion of a shiur attended by hundreds, the Ga’avad said of the arrest, “It’s a blood libel. I know Reb Amram and he is as innocent as pure gold. This is the kind of libel they made against Jews in Russia and Hungary.”

Eida kehilla members say that Rav Shmuel Lubitzki too, is being prosecuted due to his support for kollelim where hundreds of yungerleit study including many suspected of taking part in the neighborhood’s frequent demonstrations. Indeed, later that morning, a police representative accused him of financing violent protests, saying in court: “An initial investigation of the suspects indicates that part of the financing of the severe disturbances of law and order in Yerushalayim, including harm to people, property, arson, and burning of shops, was partially financed by Lubitzki and his organization.”

Representing lawyer Yair Nehorai said the court thought there was insufficient evidence to prove this point.

Members of the Eidah kehilla say that this is not the first time the community has suffered from legal persecution. They point to similar cases, such as when police arrested the wealthy Yerushalayim activist, Avraham Freulich, six months ago for tax evasion. So far, the authorities have only succeeded in destroying his business and the case has gone nowhere.

A similar fate befell Yoelish Kraus, a well-known Eidah kanoi’i who recently donated a unique collection of street posters to the National Library of Israel. Last July, authorities closed his shechita that had been in operation for decades, saying it did not comply with legal regulations.

On Motzoei Shabbos, the evening before the Meah Shearim raid, a media interview with a resident of the Arab village, Tuba el-Zangaria, exploded a media/police/government myth that Jewish activists were responsible for burning mosques.

After the burning of a mosque in Tuba el-Zangaria last October, President Shimon Peres, cabinet ministers, and MKs were quick to condemn settlers for carrying out the act as vengeance for the murders of Asher and Yonatan Pamer near Kiryat Arba the week before. Left-wingers and the press joined in the condemnations of the settler movement. Yet at the time, Rishon L’Tziyon Rav Shlomo Amar warned during a visit to the village, “We are not certain Jews had anything to do with the attack.”

In light of the Arab’s confession, MK Yaakov Katz (Ichud Haleumi) demanded an apology from those who were so quick to condemn Jews for the arson attacks.

“As I said insistently all along,” he said, “all twenty arson attacks in the last three years were carried out by Arabs whose sole purpose is to create strife and disturbances between Jews and Arabs and incite against the Jewish people, in order to besmirch it and befoul the Jews’ image in the eyes of the nations of the world.”

“For two thousand years Jews were blamed every Pesach with murdering Christian children who were found dead. Over the years millions of Jews were massacred because of this.” he added. “But we now know for certain that no Jew ever murdered a Christian child to make matzos from his blood for Pesach.

“All of these must pay the legal price for being, in essence, accomplices to the blood libels against the state of Israel and the entire Jewish people, and they must bear responsibility for the fact that many Jews were taken from their families and arrested for many weeks on false charges.”

Expressing the Eidah’s anger at the raid, Eidah secretary, Rav Yitzchok Shlomo Levi, informed the police on Sunday in the name of the Ga’avad, that henceforth, all channels of contact with the police would cease and a new chapter in their mutual relations would begin.

Rav Zalman Leib Teitelbaum, Satmar Rebbe, heard of the arrest of the Gaavad’s assistant during a Williamsburg dinner for the benefit of Kollel Yitav Lev in Yerushalayim. He interrupted the dinner to announce, “We need to shock the world after the arrests and the insult to the Ga’avad. We must hold demonstrations outside the US consulate and arouse the American government against the persecution of religion.” Later, he told Rav Tuvia Weiss that he would do everything possible to protest the insult to his honor. The Hisachdus put up posters headlined, Raban dokru — they are attacking our leading Rav. Decrying the arrests, the posters declared, “Their clear aim is to threaten and break the powerful spirit of the shield and saver of Yerushalayim, Maran the Ga’avad, shlita.”

Lawyer Uri Goldman, representing the suspects, told interviewers, “Ostensibly, the allegations are similar to episodes in the Torah sector that began with a huge ruckus and vanished within a month or two. Generally, in cases like these, the allegations shrink week by week. Now, they take advantage of the situation to create a deterrent… We hope that as in many other episodes in the Torah sector, this story will finish with a whimper.”

In reaction to the arrests, dozens of Eidah Jews went to the Russian Compound police and court center to conduct a prayer and protest vigil, and hundreds participated in protests in Yerushalayim and Beit Shemesh. This led to a number of arrests.

During Sunday’s court case, it turned out that the police were accusing Shapira not only of financial irregularities, but also of plotting violence. They based this on a taped telephone call where he heard a person speak of “burning people,” yet said nothing in response.

To this, Shapira’s lawyer responded: “I do not wish to waste the court’s time. We are speaking of words said in the course of a conversation, which the accused himself never uttered. There is no proof that anyone did anything concerning that matter, and certainly not the accused. I request to free the accused with the signing of a personal guarantee.”

On Sunday night, Judge Dov Pollack of the Jerusalem Magistrates Court released Rav Amram Shapira with no strings attached. He also chastised police for arresting him with lack of sufficient evidence. Judge Pollack explained his drastic reaction in a court protocol.

“…The plaintiff requests to extend his [Shapira’s] arrest for ten more days. The request claims that the accused committed financial crimes together with others, and that he was an active partner in organizing and financing severe disturbances of the peace that included harming other people and their property. After studying the investigative material, it appears that there is not the slightest proof against the accused concerning financial crimes. Regarding severe disturbances of public order and damage to people and their property, involved is a telephone conversation of the accused concerning things said by someone else. It should be emphasized that the respondent did not authorize or give any support to the words said by the other person, and there is no proof that the words said resulted in action of any kind. I would also like to mention that the respondent gave a statement to the police where he explained these matters. In the opinion of the court, there was no reason to arrest the respondent and certainly not to lengthen his arrest for ten additional days as the requirer asks for. There, I hereby free the respondent immediately and unconditionally.”

In addition, the court rejected the state’s request to remand the other suspects for an additional ten days, and ordered them remanded to custody until Wednesday.

Eidah kehilla members attending the trial sang and danced at the court in joy at Shapira’s release. Police removed his shackles and he was free to go. The first thing he did was phone the Ga’avad with the good news. Later, as he climbed the stairs to his simple home, friends, relatives, and supporters joyfully sang the famous song, “Tziyon, halo tish’ali l’shlom asirayich; Tziyon, will you not beseech the peace of your prisoners!”