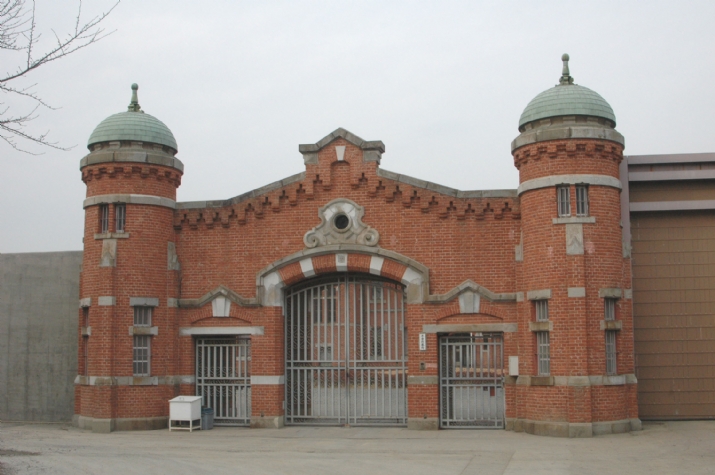 It was with feelings of elation and relief that Jews around the world learned early Monday morning that the Chiba District Court in Japan found Yoel Goldstein, Yoel Zev ben Mirel Risa Chava, not guilty, handing down a full acquittal. Immediately upon hearing the good news, Reb Aron Nezri of London and Reb Meilich Bindiner of Antwerp, the tireless askanim who have worked behind the scenes on behalf of the boys in Japan, exited the courtroom for a few moments to convey the besurah tovah to the multitudes of acheinu Bnei Yisroel who were waiting in suspense for the outcome. â€œWe congratulate the Japanese Judiciary for diligently seeking the truth and carefully analyzing the diverse elements of the defense, many of which are new concepts to the Japanese, thereby succeeding in delivering the long-awaited innocent verdict,â€ Rabbi Nezri told the Yated.
Ten minutes before the court session commenced, the leading defense attorney accompanied Rabbis Nezri and Bindinger on a visit to Yoel Zev in a meeting room under the courthouse. Through a glass pane, they communicated with Yoel Zev.

“It was a difficult few moments,” recalled Rabbi Bindinger. “We didn’t know what words could be said. Looming ahead was a possible guilty verdict – a 15-year prison sentence in addition to a penalty of Â¥5,000,000, equating to $65,000.”

After having experienced the disappointment of the verdicts handed down in the cases of the two other bochurim, Yossi and Yaakov Yosef, it was challenging to find the right words of encouragement, related the askanim.

“What can one say to Yoel Zev moments before his verdict, after having faced the fact that his two friends were handed guilty verdicts?” said Rabbi Nezri. “We tried our best to prepare him for every eventuality, carefully using only positive quotes of emunah and bitachon, and hoping and praying for the best.”

The askanim were most relieved by Yoel Zev’s attitude. In his characteristic innocent manner, he told them, “I don’t know what the material judge will tell us today, but the celestial Judge, the Shofet kol ha’aretz, will certainly rule innocent.”

As has been reported extensively, the smuggling saga began on April 3, 2008, when the three bochurim from Yerushalayim and Bnei Brak – two under age 20 and one under age 18 at the time – were asked to transport some antiques from Holland to Japan. The “friend” who asked them for the favor assured them that everything was legal. Once in Amsterdam, they were given the “antiques” – concealed inside false-bottomed suitcases. Told that this was a precaution against theft, they once again suspected nothing, and flew on to Tokyo. In Japan, the false bottoms were quickly detected and broken into by customs officials – who found not antiques, but $3.6 million worth of Ecstasy pills.

After the judges entered the courtroom and took the customary Japanese bows, the presiding judge summoned Yoel Zev, using his first name Yoel, which is uncommon in Japanese courts. The judge asked him to stand at the pulpit directly in front of the judges. The judge then immediately announced – in Japanese – the verdict: “You are innocent.” The personal translator of the Yidden in the courtroom, sitting alongside them, quickly told them, with great joy, the court’s verdict. The court-appointed translator then translated to Yoel Zev, “Atah zakai.” Upon hearing these words, Yoel Zev’s father, Rabbis Nezri and Bindinger, and the other Yidden present shed tears of jubilation.

After announcing the verdict, the judge proceeded to explain the court’s decision in detail.
Some of the pertinent points mentioned by the presiding judge are as follows:
– The court took into account Yoel Zev’s background, education, place of residence and other such details.
– The court took into account the fact that Yoel Zev resided in the town of Bnei Brak, with mostly ultra-Orthodox Jews, with no cinema or similar recreational venues, and a very low crime rate. Bnei Brak boasts no manned police post and virtually no televisions. The city of Bnei Brak has created a sheltered society with the objective of its youth having limited contact with secular people.
– Yoel Zev studied in the Satmar Yeshiva, belonging to the Satmar community, who are in ways more insular and secluded than mainstream ultra-Orthodox Jews.
– Limited command of the Modern-Hebrew language in the Satmar community leads to no understanding of the contemporary use of the word samim (drugs).
– The ultra-Orthodox Jewish press generally avoids mention of drug-related crime.
– Youth in the Orthodox Jewish community have not seen narcotics and have no grasp of the street value of narcotics.
– The Orthodox Jewish community is close-knit and boasts a high level of social trust. In light of that, no suspicion was raised when this assignment was proposed to the boys.
– The monetary reward offered to the boys was not reflective of remuneration of a witting mule.
– Recognition and knowledge of the luggage containing a false bottom does not prove knowledge of the contents of the false bottom.
– Countering the prosecutor’s argument that would the boys have truly believed that the contents were antiques, they ought to have questioned why the goods were not being shipped by means of a courier, the judge explained that in the close-knit Jewish community, it is common practice for such errands to be requested and graciously accepted.
– The results of polygraph examinations proved lack of knowledge.
– The court recognized that, during the entire trip, including the duration of his apprehension at Narita International Airport, Yoel Zev never exhibited signs of anxiety or nervousness.

Tens of other explanations were presented elaborately by the presiding judge, who quoted extensively from the many live witnesses and sworn affidavits presented by the defense team. These explanations took the better part of two hours.

CLOSING OF THE SESSION

The presiding judge then apologized, in the name of the Ministry of Justice, for the protracted trial procedure, mentioning that he was sorry that it had taken from April 2008 until August 2011 to deliver the innocent verdict.

Yoel Zev’s father, in an emotionally-charged atmosphere after the judges left the courtroom, immediately recited the bracha of “Hatov vehametiv,” which is recited upon learning good tidings.

This was followed in quick succession by handshakes and expressions of congratulations between Yoel Zev, the defense attorneys, the askanim, and on-looking well-wishers.

Yoel Zev was then escorted from the courtroom, flanked by two officials from the Tokyo Immigration Office.

The askanim accompanied the leading defense attorney to the Chiba Detention Center to try to meet with Yoel Zev and guide him regarding the procedures to follow.

“We were pleasantly surprised to learn that we could no longer obtain an audience with him at Chiba, since he was immediately being transferred, with all his belongings – his clothing and seforim – to the Tokyo Immigration Detention Center,” Rabbi Nezri said.

In line with standing practice, immigration officials took Yoel Zev into their custody on account of overstaying his 90-day visa in 2008. An explanation to the immigration office stating the cause of Yoel Zev’s delayed exit from Japan was prepared by the legal team and handed to Yoel Zev Monday morning, before the verdict, in light of this eventuality. Attorneys are hopeful that this matter will be rectified in an expeditious fashion and that he will be able to leave the country without further delay.

At 8 a.m. local time on Tuesday, Rabbi Nezri, Rabbi Bindinger, and others met with Yoel Zev at the Immigration Center. It was the first audience with Yoel Zev in three and a half years to take place without a glass barrier between them.

The prosecution’s office has 14 days to appeal the verdict at the Tokyo High Court.

All are asked to continue davening for Yoel Zev ben Mirel Risa Chava for his safe return home.

Rabbis Nezri and Bindinger were quick to point out the efforts devoted to this case by a broad spectrum of kindhearted Yidden, including Dayan Chaim Yosef Dovid Weis of Antwerp, Rav Shmuel Halevi Wosner, the Munkatcher Rebbe, Rav Yitzchok Dovid Grossman of Migdal Ha’emek, Rav Yaakov Dov Bleich of Kiev, Rabbi Binyomin Edery of Tokyo, and, lhbcl”c, the unforgettable Rav Aba Dunner zt”l, among other rabbonim, dignitaries, professionals, lawyers, and activists from the Jewish community.

“An exhaustive list would be appropriate but quite impossible,” the askanim both said. “We are indebted to them all.”

Yossi, the only juvenile of the three boys arrested in Japan three years ago, received a sentence of five years, which was what the prosecution had requested from the judges. Yossi, as reported here, has since been transferred to Israel, where his sentence was commuted under conditions and supervision of the Israeli prison authority.

Yaakov Yosef, the younger of the two adult bochurim, received a six-year prison sentence of the 13 years requested by the prosecution. He is pending transfer to Israel and the transfer procedure is well underway.

Efforts to retain Yaakov Yosef’s status at the Chiba Detention Center until his transfer to Israel were thankfully productive. According to Israeli protocol, one-third of the full sentence can be deducted, and the remaining time can also be commuted as per their discretion. Based on this, Yaakov Yosef could be released from prison within a few months from now. All are asked to continue davening for Yaakov Yosef ben Reizel.

Special thanks to Rabbi Nezri and Rabbi Bindinger,who gave of their time while in Tokyo, Japan, to share their reflections with the Yated following the verdict.