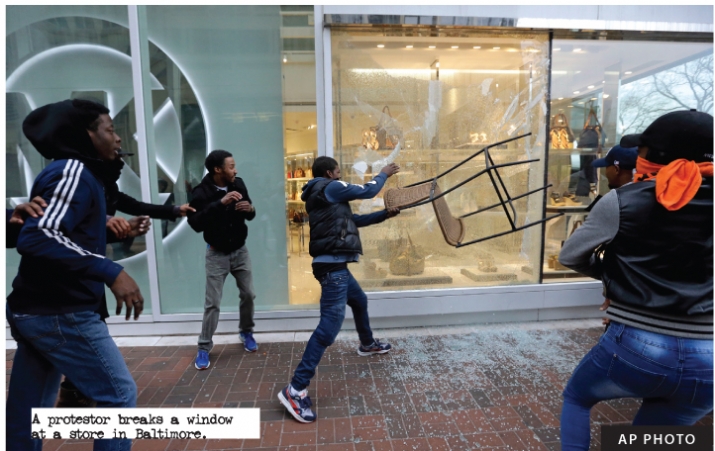 As I sit in my house following the terrifying and horrific events transpiring a mere few miles away, I am concerned and worried about our safety. Wild and unruly gangs of hoodlums are wreaking havoc on the streets of downtown Baltimore. They are burning cars and attacking policeman. The governor has declared a state of emergency, calling on the National Guard to help restore order to the streets and the city. As a precaution, all public schools are closed tomorrow.

When one feels scorned and mistreated, anything can happen. Stripped of one’s rights, disdain rears its ugly head, destroying all in its path. It is true that this time, the culprits are uneducated and don’t have much to live for or lose. And because of that, the violence escalated quite quickly and chaos was taken to unprecedented levels. But after the numerous recent incidents of police brutality against African-Americans, this had to have been somewhat expected. It takes someone special to forgive and forget when they’ve been hurt in a very blatant manner.

But we are not like them. We respond to a higher calling. We are the children of Avrohom, Yitzchok and Yaakov. We have been mistreated and persecuted for thousands of years, and yet we don’t lash out. Why?

We have the Almighty to thank for that. He is our role model and we must aspire to act as He does.

When Adam and Chavah disobeyed the Almighty and tasted from the tree of the Eitz Hadaas, the Almighty responded by clothing them with kasnos ohr, clothing to wear. The Ibn Ezra comments, “Mi yemalel gevuros Hashem umi yesaper minifle’osav…ein cheiker legdulaso – Who can imagine the strength of the Almighty, who can speak of His wonders? There is no limit to His greatness.”

The obvious question is: Why here? What is so great about this particular deed? Hashem fashioned and created oceans and continents. He split seas and performed countless miracles. Why do a few garments of clothing warrant such seemingly excessive praise? What did the Ibn Ezra notice that initiated such effusive glorification?

The sefer Ketzeis Hashemesh Begevuraso gives a penetrating explanation. Adam and Chavah defied the Ribbono Shel Olam. They ignored His instructions and rebelled. In a sense, they ruined His world. It was perfect and they sullied His masterpiece. Most would respond to such behavior with anger and rage. They would be infuriated – and rightfully so. But the Almighty’s response was quite different. Yes, there would be consequences. But first, He gave them honor and dignity. It would have been kind and forgiving had Hashem merely tolerated their disobedience. But He did more. He paid them back for destroying his world by being mechabeid them.

He repaid their mistreatment and disobedience by fashioning garments and allowing them to maintain their dignity. And that, says the Ibn Ezra, warrants the highest form of praise. And we, who are created in the image of Hashem, are asked to do the same. We must respond to those who defy and disobey our requests by honoring and dignifying them.

It seems absurd. And perhaps impossible.

We are not to destroy, maim and damage. We are not to throw fits of rage. Leave that to the hoodlums. We know better.

This is the challenge that lies before us.

One Friday night, an elderly Rav Zerach Braverman delivered a shiur in his yeshivah in Yerushalayim. After the shiur, an exhausted Rav Zerach decided to rest a bit before he walked back home. Many bochurim had gone home for Shabbos, so plenty of beds were available in the dormitory. Rav Zerach found an empty one and lied down to go to sleep. A short while later, someone entered the room and began pummeling him with blows.

With Rav Zerach’s back turned to his assailant, the attacker had no idea that he was beating his rosh yeshivah. Earlier that day, two young men got into a fight and one warned the other that he would exact revenge. Afraid to sleep in his own bed, the scared fellow chose another bed for the evening. Sensing what transpired, Rav Zerach absorbed the blows silently and never turned around to reveal who he was. He was afraid that he would shame the perpetrator. Instead, he chose to suffer in silence and preserve the young man’s dignity.

It is the time period of Sefiras Ha’omer. Twenty-four thousand talmidim of Rebbi Akiva died during Sefirah, “shelo nahagu kavod zeh bazeh.” It is hard to imagine that these historical giants were punished for lacking basic kavod. Rather, greatness is demanded from great individuals. Mere kavod would not suffice. These talmidim were expected to display kavod, as taught by Hakadosh Boruch Hu. And that kavod is not easy to come by. To repay hurt with honor is no easy chore.

For as we have seen, when man lacks kavod, the results are terrifying.