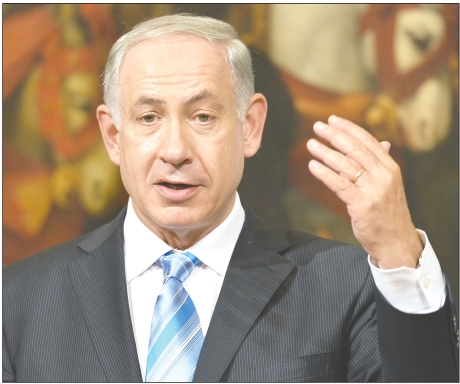 A summit in Budapest last week that brought together Israeli Prime Minister Binyomin Netanyahu with the heads of East and Central European countries – dubbed the Visegrad Group – staked out common ground among the leaders on the burning issues of immigration control and protecting national security.

Israel’s prime minister praised the Visegrad group for supporting Israel “on several occasions” at EU meetings and took advantage of the warm reception from the leaders of Hungary, Poland, Slovakia and the Czech Republic to make a bid for their increased support of Israel in international forums.

These governments share with Israel an opposition to the EU’s left-wing liberal agenda of eradicating borders between countries and opening their doors to unlimited immigration. The worldwide push for no borders and unfettered immigration is being bankrolled, observers say, by Budapest-born US billionaire George Soros, who recently came under a sustained “billboard” attack by Hungary’s government.

The Visegrad Group has antagonized the EU by insisting on the right to severely curb the influx of refugees fleeing war-torn Syria and other Muslim nations. These governments support policies aimed at protecting their countries’ national identities and defending themselves from outside threats. Israel has likewise blocked off its border to Syria, preventing the migration of mass numbers of refugees as the regime’s forces fight Kurdish and Arab fighters seeking to overthrow Assad.

Meeting privately with the prime ministers in Budapest, Netanyahu seized on the warm reception from these leaders to slam the EU’s discriminatory policy of trying to force Israel to make concessions to the Palestinians by holding up trade agreements pending Israel’s progress in the “peace process.”

“The European Union is the only association of countries in the world that conditions relations with Israel…in every area on political conditions,” Netanyahu said in a recording not meant for the public but which was picked up by open microphones. “If I may say so, it’s absolutely crazy,” he added.

“I’m not talking about Israel’s interests. I’m talking about Europe’s interests,” Netanyahu continued. “There is no logic here. Europe is undermining its security by undermining Israel… Europe has to decide whether it wants to live and thrive, or whether it wants to shrivel and disappear. I’m not very politically correct … but the truth is the truth.”

He told the leaders that American policy in the Middle East has improved under the Trump administration, with the U.S. boosting its presence in Syria and taking a more aggressive stance toward Iran.

“May I suggest that what comes out of this meeting is your ability to communicate to your colleagues in other parts of Europe…not to undermine the one country in the Middle East that defends European values and interests… Stop attacking Israel. Start supporting Israel.”

Netanyahu’s remarks took place during his three-day visit to Budapest, the first such trip by an Israeli leader since the fall of communism in 1989. His first meetings in the region were with Hungarian Prime Minister Viktor Orban, who declared that his country firmly opposes anti-Semitism and expressed regret for the “crime” of failing to protect its Jewish citizens during World War II.

“It is the duty of every Hungarian government to defend its citizens whatever their heritage. During World War II, Hungary did not honor this moral and political obligation,” Orban told a joint news conference with Netanyahu. “That is a crime, because we chose collaboration with the Nazis over the defense of the Jewish community. That can never happen again. The Hungarian government will defend all of its citizens in the future.”

Netanyahu responded by praising Hungary as a key ally of Israel as it faces growing hostility around the world. Among other things, Israel seeks support for curbing the BDS movement, a form of political war that seeks to isolate and demonize Israel by calling for boycott, divestment and sanctions against the Jewish state.

BDS was spawned in the rabidly anti-Semitic forum of the 2001 Durban Conference, where Jew-haters masked as human rights activists were allowed to hijack a United Nations forum aimed at combating global tyranny and racism. Since then, BDS has steadily gained international momentum, including on US college campuses.

The two heads of state discussed security matters among other subjects of concern. Hungary has recently begun building a security fence to keep out illegal immigrants and seeks Israeli expertise and materials for the project.

Orban has slammed Soros, who is of Hungarian Jewish origin, as a “risk to national security” due to his activism designed to settle millions of immigrants in European countries in the coming months and years. The streets of Budapest have been filled with posters and billboards displaying a smiling Soros with the caption, “Don’t let Soros get the last laugh!”

The campaign follows a series of moves to halt Soros’ operations in the country that includes massive funding of influence-wielding NGOs (non-governmental agencies; i.e. privately funded civil groups) seeking to implement Soros’ agenda. The Orban government is now trying to impose legislation that would force NGOs in the country to reveal where their private funding originates and the purpose for which the money was received.

[A similar crackdown in Israel with the NGO Transparency Law has forced groups that demonize Israel, such as such as B’tzelem and Breaking the Silence, to disclose their sources of funding. In addition to revealing sizable grants from European countries, the financial disclosures identified New Israel Fund, a George Soros-funded organization, as a key supporter of both groups. These groups promote claims that the Israeli government perpetrates war crimes against the Palestinians and are linked with individuals and groups that support BDS.]

George Soros has for years promoted open borders and massive migration of refugees and asylum seekers into European states. He has funneled billions of dollars into international agencies that work toward this goal. Critics say Soros wants to empower a European “asylum authority,” which would determine each country’s immigration quota.

Soros’s groups work to facilitate illegal immigration into the United States as well. They have sought to influence U.S. Supreme Court rulings on illegal immigration from Mexico, notes Jerusalem Post columnist and political analyst Caroline Glick. Americans and Europeans who oppose open borders are demonized by liberals in the Soros camp as “xenophobic” and “racist.”

Relations With Hungary Haunted By The Past

While the anti-Soros campaign officially ended earlier this month, many billboards depicting the left-wing billionaire were still visible around Budapest when Netanyahu arrived in the country. The Israeli ambassador to Hungary had initially called for an end to the campaign after Jewish groups expressed apprehension that attacks on Soros would encourage anti-Semites in Hungary.

A day later, however, Israel reversed its position, noting that while Israel deplored “any expression of anti-Semitism,” it did not intend to “delegitimize” criticism of Soros, who has consistently utilized his enormous wealth to defame Israel and undermine its elected governments.

An AP article quoting an interview with Andras Heisler, president of the Federation of Hungarian Jewish Communities, cited the community’s appreciation for the support received from the Orban government for the renovation of shuls, as well as Orban’s political backing of Israel in international forums.

“Despite good relations overall, in terms of remembrance policies and historical perspectives, we do sometimes have serious conflicts with the Hungarian government,” Heisler admitted.

Orban’s recent words of praise for Miklos Horthy, Hungary’s leader during the Holocaust who was a Hitler ally, offended the Jewish community. Jewish groups also criticized a 2014 event commemorating Nazi Germany’s 1944 invasion of Hungary which cast the Hungarian people as victims, downplaying their role in the Holocaust.

550,000 Hungarian Jews were deported to death camps under Horthy by Nazis working with Hungarian authorities. After deportations ceased, tens of thousands of Jews residing in Nazi-occupied Budapest were murdered by Hungarian Nazis of the Arrow Cross Party that ruled the country from October 1944 to the end of the war.

During this time, 60,000 Jews were forced on a death march to Austria. Thousands more were robbed, murdered and thrown into the Danube by Arrow Cross forces. The terrifying rampages continued until the Arrow Cross was driven out by the advancing Soviets.

The trauma of those years still haunts Hungarian Jews. Today, 70 years later, while anti-Semitism in Hungary manifests as “verbal attacks,” the community has so far been spared the violent assaults Jewish communities in Western Europe have been experiencing, Heisler said.

In official statements prior to his meeting with Netanyahu, Prime Minister Orban professed “zero tolerance for anti-Semitism,” saying that the notion that the government in any way had anti-Semitic motives behind the anti-Soros campaign was unfounded.

“The campaign seeks to draw attention to the threat George Soros represents on the issue of immigration – namely his position that the borders of Europe must open up to immigrants,” Orban said. “We would like to emphasize,” he said, “that the poster campaign has nothing to do with Mr. Soros’s religious affiliation – if indeed he has any.”