Israel Bashing at the Qatar International Conference for Defense of Jerusalem 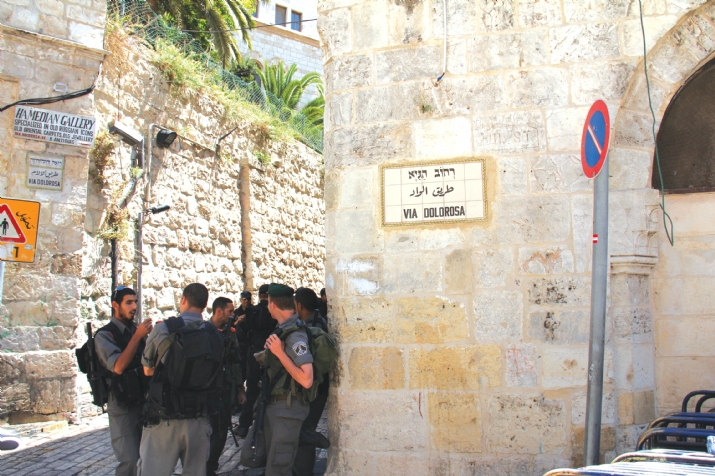 Earlier this week, the Arab League, representing 22 Arab states (including Syria whose participation was suspended in November), held an International Conference for the Defense of Jerusalem. They gathered in Doha, capital of Qatar, a tiny Gulf State whose 300,000 citizens constitute one of the wealthiest societies on earth. Following a decision at last year's Arab summit in Libya, over seventy countries and organizations headed for the conference under the slogan, â€œSupport the steadfastness of Jerusalem.â€ An announcement stated that the conference would revolve around four issues: Jerusalem and international law; Jerusalem and history; Jerusalem, colonization, and Israel violations; and Jerusalem and the civil society. Anyone seeking a kind word about Israel at the conference would be seeking in vain.

Obviously, the conference was not intended as a forum for discussion, but as a platform for hate. The analysis of Yerushalayim’s history was dictated in advance: “This theme reviews the succeeding periods of Jerusalem’s rich history. It aims at pointing out the weaknesses of the Jews’ historical arguments backing their claims to the holy city. Of paramount importance is the disclosure of Israel’s deeds at falsifying history and archeology by means of destruction, omission, modification and fabrication of historical and archeological facts. By contrast, an emphasis should be put on the overwhelming set of evidence spread across the city showing its rooted past as an inalienable part of Palestine and a holy place for the divine religions.”

During the conference, great emphasis was placed on the mysterious claim that Israeli archeology is destroying Arab artifacts, but none on the fact that Arab excavations on the Har Habayis are blatantly destroying thousands of Jewish artifacts buried underground. Jewish archeologists have been retrieving a fraction of them by patiently sifting through mountains of Har Habayis rubble discarded by Arab construction workers.

The conference emphasized that although Israel annexed 25 square miles of East Jerusalem, which included 28 villages and areas of Beis Lechem and Beit Jala, this annexation was declared “null and void” by United Nations Security Council Resolution 478. It paid less attention to a survey conducted by Pechter Middle East Polls last year among Arab residents of East Jerusalem. Asked whether they would prefer to be citizens of a Palestinian state or of Israel, 35 percent chose Israel, 30 percent chose Palestine, and 35 percent provided no answer. When asked if they would move to Israel if their neighborhood became part of Palestine, 40 percent said they would probably move to Israel, versus 37 percent who said they would stay put. It seems that the Arab residents of East Jerusalem are less dogmatic about Israel’s evil than their representatives in Qatar.

Qatar’s hereditary emir, Sheikh Hamad bin Khalifa Al-Thani, opened the conference on Sunday by warning, “We must act quickly to stop the Judaization of Jerusalem.” He insisted that an Arab world that has overthrown four long-time dictators in Tunisia, Egypt, Libya and Yemen “has awakened, and [it] will not accept” anything “less than a just peace based on the legitimate rights of the Palestinian people.”

“Is it conceivable that the people that could no longer tolerate oppression at home will accept the oppression of a foreign occupation?” he asked his audience. He called on the United Nations to “investigate the measures Israel has taken to Judaize Jerusalem since its occupation in 1967,” and this would be the first step towards “forcing Israel to reverse those measures.”

Representing the Palestinians at the conference was Authority Chairman Mahmoud Abbas, who complained that Israel was trying to erase Palestinian presence from the city.

“The Israeli occupation authorities are using the ugliest and most dangerous means to implement plans to erase and remove the Arab-Islamic and Christian character of east Jerusalem,” he said. This included the “apartheid wall and a band of settlements in order to isolate the city from its surroundings in the West Bank.” He insisted that the East Jerusalem question should become the main focus of Arab and Islamic political and economic relations with the world.

Abbas failed to point out the exactly where and how Israel is erasing the Palestinian presence from the city. The Arab population of east Jerusalem has soared from 70,000 in 1967 to over 300,000 currently. Although Israel destroyed 680 illegally built Arab buildings since 2000, tens-of-thousands of illegal structures remain untouched.

Prime Minister Binyamin Netanyahu was angered by Abbas’ hypocrisy. “This is a harshly inflammatory speech from someone who claims that he is bent on peace,” he said. “The time has come for the Palestinian leadership to stop denying the past and distorting reality. For thousands of years Jerusalem has been the eternal capital of the Jewish People. Jerusalem, under Israeli sovereignty, will continue to be open to believers of all faiths. There is freedom of worship for all, and Israel will continue to carefully maintain the holy places of all religions.”

Included among the delegates were two Arab members of Israel’s Knesset, MK Ahmed Tibi, once political advisor to Yasser Arafat, and MK Taleb El-Sana, an outspoken critic of Israel.

True to form, the two Arab MKs criticized Israel at the conference, Tibi saying that “Israel is an occupying power in East Jerusalem and withholds the Palestinian’s people’s freedom of religion,” and that Israel’s Judaization of the city is a “blatant violation” of international law. El Sana claimed that Israel is trying to undermine the existence of the al-Aqsa mosque and “it is the responsibility of the Arab nations and Islam to save it before it’s too late.”

Likud MK Danny Danon was infuriated at their traitorous stance and called for their removal from the Knesset as “enemies of the state.”

UN Middle East envoy Robert Serry traveled to the conference on behalf of UN Secretary-General, Ban Ki-moon, and read a sympathetic message from Ki-moon to the delegates.

Israel felt that the United Nations had no place at the one sided hate carnival. One diplomatic official said, “It is extremely disappointing and infuriating that the UN secretary-general’s envoy, who never finds the time to properly condemn the shootings on Israeli territory from Gaza, has all the time in the world to take part in what is unashamedly an anti-Israel propaganda fest, intended to subvert and deny the very foundations of Jewish history.”

Turkey, a past ally of Israel, was represented at the conference by its Prime Minister, Besir Atalay. Repeating the endless song of the conference, he told the press in Qatar that Jerusalem is “a captive city in the hands of Israel” and that its policy is aimed at denying the city’s thousands-year-old history with Muslims, Christians, and Palestinians.

The conference concluded Monday evening with the Doha Declaration. This stated the foregone conclusions of the two days hate fest and insisted on the formation of a new United Nations commission to investigate Israel’s crimes:

“The declaration appreciates and supports the proposal of His Highness the Emir to go to the Security Council to adopt a resolution for the formation of an international commission to investigate all Israeli actions taken since the 1967 occupation of Jerusalem with a view to erase its Arab and Islamic features… It emphasizes that Israel breaches international laws to forcefully displace the people of Jerusalem…
“It expresses deep concern about the ongoing Israeli works including excavations and archaeological excavations in Al-Aqsa Mosque and around Old City, which seriously affect the distinctive character of city at the religious, cultural, historical and demographic levels…

“The declaration calls on international powers who remain silent towards Israeli violations to assume their responsibility and compel Israel to implement all UN resolutions relevant to Jerusalem… to ensure that they enjoy all their civil, economic and social rights in their city; and to preserve the city’s sacred sites, historical monuments and human heritage.”

Ridiculous as the conferences claims and accusations, the words bandied at the conference are a tenet of belief for the Arab world, as they seek to cast doubt on Israel’s legitimacy in the international scene. For millions of people in the world, the 220,000 Jews of East Jerusalem neighborhoods are no less illegal settlers than the Jewish residents of Yehuda and Shomron.

Meanwhile the PA let out word that it is thinking about abrogating the diplomatic agreements it reached with Israel, because Israel doesn’t honor them. Instead the would-be peace partners are weighing whether it is worth forgoing the security and economic cooperation with Israel it now enjoys, or to forsake them and go for a popular uprising against Zionist occupiers. Part of that plan would also include seeking UN approval for their statehood gambit.