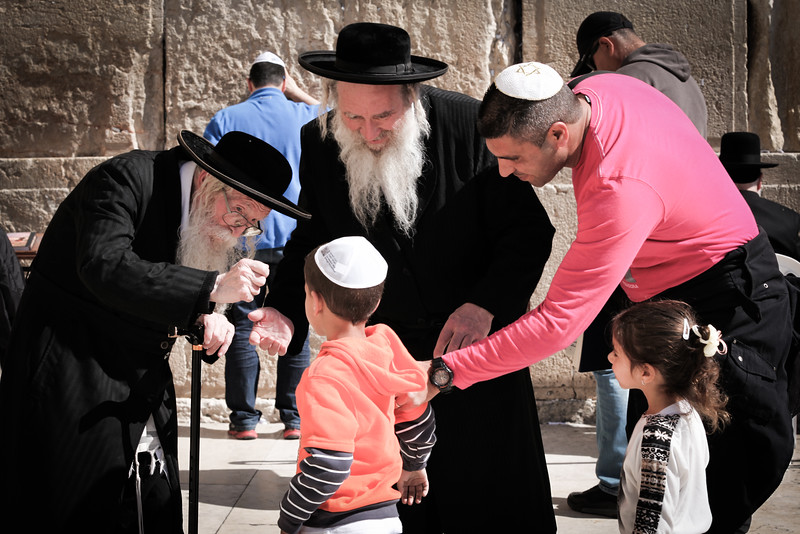 There is no question that we must expend considerable effort toward insulating ourselves and our children from much of what transpires in the outside world. Even the headlines of the news at the top of the hour can be filthy sewers of ideas and ideals that are repulsive to any G-d-fearing Jew.

That is why when writing an article marking the shloshim of the Yerushalmi tzaddik, Rav Aharon Yosef Brizel zt”l, I was taken by something he said that gives insight into his own position on the insulation vs. exposure dichotomy.

First, however, I must include several lines about Rav Aharon Yossel, so that we can understand about whom we are talking. Rav Aharon Yossel was a member of the old yishuv of Yerushalayim. In his distinctive blue caftan, white, thickly-stitched Yerushalmi yarmulka, and flat felt hat, one knew that he carried the legacy of the old yishuv that fought the encroachment of secular Zionism into their territory with every fiber of his being.

Rav Aharon Yossel was also a fiery Karlin-Stoliner chossid, who was attached heart and soul to the admorim of Karlin-Stolin. He was an exalted oveid Hashem, and thousands were strengthened in their personal avodah just from listening to him daven or make Kiddush. A holy man, he walked in the streets with his eyes down so that he would not see anything that would adversely affect his kedusha, while radiating inner simcha with his contagious, jovial nature, making people want to seek his presence.

It was well-known that he was an anti-Zionist. He spoke Yiddish at home and all of his children and grandchildren were fluent in Yiddish and spoke it as their first language. Nevertheless, when asked whether people should make an effort not to speak Ivrit because it was the language adapted by the early Zionists as a way of turning their backs on the “golus language” of Yiddish and the Diaspora adherence to Torah and mitzvah observance that it represented, Rav Aharon Yossel gave insightful advice. While stating that it was very important that Yiddish be spoken in the house, he also advocated that people be able to fluently converse in Ivrit as well. Parents should also make sure that their children are able to converse fluently in Ivrit, he said, so that when they grow older, they will be able to converse with and draw closer to Yiddishkeit the vast majority of people who do not speak Yiddish.

He would relate that when he was young, the Zionist youth would ridicule and physically beat him and his likeminded friends over their stubborn adherence to speaking Yiddish. Nevertheless, as the situation evolved, it is clear that today, knowing Ivrit is very important, because without it one cannot connect with and reach the vast majority of Yidden living in Eretz Yisroel.

There are a number of important, practical lessons that can be derived from Rav Brizel’s logical conclusion. Firstly, a person must constantly reassess the spiritual reasons as to why he conducts himself in a certain way. When Rav Brizel was a bochur and a young man, speaking Yiddish was a valiant act of separation from a culture that sought (and succeeded in the vast majority of cases) to get rid of the Yerushalmi Jew of old. As the decades moved on, however, and the children and grandchildren of the original militant apikorsim who beat and ridiculed the members of the old yishuv became classified as tinokos shenishbu who knew precious little about anything associated with Judaism, he had to reassess the shitah of complete kanna’us and separation in light of the completely changed facts on the ground.

The second lesson was one of insularity vs. inclusivity. While, without a doubt, Rav Aharon Yossel held that it was important for all G-d-fearing Jews to insulate themselves from the tumah of the outside world as he himself did to a large extent, nevertheless, he obviously still felt that there was an important function in being able to relate to secular or traditional Jews who did not share the same views to the extent that parents should actually ensure that their children know how to speak a language that just a few decades earlier had been taboo.

This brings to mind the vexing chinuch question that all of us, as parents and educators, constantly have to deal with. How much should we insulate ourselves and our children? Is there a point at which too much insulation is a chinuch deficit and can even lead to chillul Hashem?

I must confess that there are times when it is downright embarrassing to be associated with visibly frum-looking Jews. Usually, it is in public places, such as airports, airplanes, hospitals and the like, where they suddenly have to leave “the bubble” of the insulated frum community in which they live and interact with the general world.

Often, the basic social skills of interaction, etiquette, politeness, and stringing together a coherent English sentence is beyond them. Not only does it make a chillul Hashem, which is bad enough, but it also ensures that any goodwill from the nations amongst whom we reside, which we desperately need in any golus, is squandered, leading all of “You Orthodox,” and “You Hasidics,” to then be painted with the same broad brush of uncouthness and intolerance.

Let me make sure I am not misunderstood here. There is nothing wrong with a frum person being resolute and uncompromising in his avodas Hashem. A person who is particular with shemiras einayim should and can continue to do so, even when he leaves the bubble, but he has to be taught how to do so in a civil manner. Yes, it is possible!

Greeting people in an airport, a hospital or another setting outside your community must be done in a civil and dignified way. This is the most basic chinuch in civility that every single frum man, woman and child must receive and give over.

Even when one must make a point in order not to transgress a halachic imperative, for example, when a female innocently offers you her hand in greeting, there are elegant and easy ways to explain one’s religious principle to the person offering her hand, and in today’s environment of religious tolerance, if it is explained with civility and goodwill, it is almost always accepted.

Making a Kiddush Hashem…Outside the Bubble

Yes, we know that the overwhelming majority of our fellow Jews do not conduct themselves improperly. We know how the vast majority of those in our respective communities go out of their way to make a kiddush Hashem. Unfortunately, it also must be stated, as difficult as it is, that there are members of our communities who have demonstrated and continue to demonstrate that they have no idea how to interact with the general population. The importance that we attach to insulating our young (and our not-so-young) from many of the negative aspects of the host culture should not in any way prevent them from knowing how to behave once they leave the confines of their shul, school or neighborhood. Parents and educational institutions must teach their youth how to behave outside the bubble.

Let us all resolve to make an effort to inculcate in our children the ideal that even as we urge them never to compromise on their hard-earned spiritual gains associated with insulating themselves from the terrible spiritual pitfalls that the host culture embodies, they must, at the same time, learn and be taught how to interact with those outside the bubble of their own communities.

In this way, all who see them will automatically associate anyone in our community with that which is stated in the Gemara (Yoma 86): “Abaye said in the name of a baraisa, ‘And you shall love Hashem, your G-d.’ ‘Loving Hashem’ means that you shall make the name of Heaven beloved through you. How should one do so? One should learn Torah and Mishnah, serve talmidei chachomim, and he should be pleasant with people in his business affairs. What do people say about such a person? Fortunate is his father who taught him Torah, fortunate is his rebbi who taught him Torah, woe to the people who have not learned Torah. Ploni who taught him Torah, see how pleasant are his ways, how proper are his actions. About him and others like him the posuk states: ‘You are My servant, Yisroel, in whom I will be glorified’ (Yeshayah 49:3).”

The Gemara continues: “But one who learns Torah and Mishnah, serves talmidei chachomim, but does not faithfully conduct his business affairs, and he does not speak pleasantly with other people, what do people say about him? Woe to Ploni who learned Torah, woe to his father who taught him Torah, woe to his rebbi who taught him Torah. Ploni who learned Torah, see how destructive are his deeds, and how ugly are his ways. The nations will say about him and others like him, ‘These are the people of Hashem, yet they had to leave His land’ (Yechezkel 36:20). Through their sins and subsequent exile, such people have desecrated the name of G-d.”