The Inside Story: The Boy Who Asked Trump to Pardon Rubashkin: A Riveting Tale of What One Person Can Accomplish 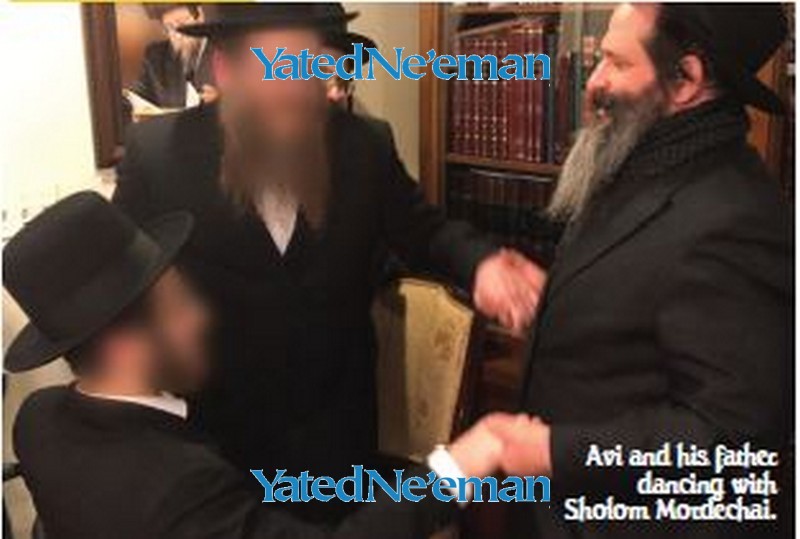 It all started on visiting day during the summer of 2015.

The Friedmans were driving in the Catskills on Route 17, between Exits 96 and 97, when their car began emitting an awful smell. Mr. Friedman pulled over to the side of the highway to see if he could determine what the problem was. As soon as the car stopped, his children bounded out of it.

“Ta, is the car going to explode?” they asked, concerned.

Mr. Friedman examined his car, which had clearly seen better days. It was an older vehicle, and the smell could have been attributed to a number of things. But Mr. Friedman is no automobile expert, and he could not pinpoint the problem. He’d have to take it to a mechanic. But what mechanic could be found in that area, and which one would be open on a summer Sunday evening?

Mr. Friedman called Chaverim for their advice as he mulled his options.

At that moment, a van pulled over next to the Friedmans’ car and the driver, a frum woman, asked if they needed assistance. Mr. Friedman explained his predicament.

“There’s someone at our bungalow colony who is handy,” the woman said. “Come with me and let’s see if he can help.”

The Friedman kids weren’t getting back into their father’s old car, too scared of the possibilities, so they piled into the woman’s car, while Mr. and Mrs. Friedman followed behind. The duo made their way down a windy dirt Catskills road until they arrived at a bungalow colony.

After exiting their vehicles, the woman approached Mrs. Friedman. “During the drive,” she said, “your children told me a bit about you. They also told me your maiden name. Are you related to So-and-so?”

“Well, he’s friends with my husband,” said the woman.

The woman who had pulled over to help the Friedmans was none other than Mrs. Leah Rubashkin, who contacted the member of her colony who she thought could figure out what was causing the car trouble.

As the Friedmans shmoozed with Mrs. Rubashkin, the handy fellow inspected the car, which he found to be in working order. He said that the burning smell was nothing to be concerned about and that the Friedmans could safely drive their car back home.

“Where are you going?” she asked.

“We’re going to head back home.”

“You can’t go home yet. You have to eat supper here first. We put up a barbecue. We have plenty of food. We even have meat from the shechitah that we know your nephew prefers, so you can feel comfortable.”

Mrs. Rubashkin’s invitation was so warm and sincere, the Friedmans couldn’t refuse it.

The Friedmans enjoyed the gala supper served by Mrs. Rubashkin and her family, whose kindness and generosity struck a chord. They were blown away by the warmth and graciousness shown to total strangers from the side of the road.

“Any news on your husband?” the Friedmans asked during dinner.

Mrs. Rubashkin smiled and pointed to her phone. “I’m waiting for his call. Any minute now, he may say that he’s coming home!” she said, demonstrating the unbreakable faith for which the Rubashkins are now known.

After dinner concluded, the Friedmans expressed their earnest gratitude to Mrs. Rubashkin for treating them like family and extending herself in such a special way.

The Friedmans drove back home to the city, arriving safe and sound, with no car problems en route. In fact, the car didn’t require any subsequent repairs. In retrospect, the trouble encountered on Route 17 seemed orchestrated from Above simply for them to meet up with Mrs. Rubashkin and be the beneficiaries of her chesed.

The Friedmans’ son, Avi, is disabled. Some years ago, the Friedmans contacted the Make-A-Wish Foundation, a non-profit organization that arranges experiences – described as “wishes” – to children with serious medical conditions.

The foundation is famous for making dreams come true for children facing life-threatening illnesses, allowing them to have what they want, be what they want, or meet anyone they wish to meet.

Avi Friedman considered his options. Perhaps a trip to Eretz Yisroel with his entire family. Maybe a visit to the Swiss Alps for a week-long vacation. A two-week cruise. A dream ten-day trip to Disneyland. The options seemed endless.

Avi made a wish and waited for the foundation to respond.

At one point, Avi decided to change his wish. Rather than what he had selected earlier, he now wanted to meet the president of the United States. The foundation representative asked if he had any particular reason for his wish. Avi didn’t want to say.

To his family, however, he revealed his intent: Avi wished to meet President Donald Trump to request that he pardon Sholom Mordechai Rubashkin, incarcerated at Otisville prison, the victim of an unprecedented and unfair 27-year prison sentence.

Avi’s parents contacted askonim involved in the Rubashkin campaign to make sure that their efforts to reach the president on Sholom Mordechai’s behalf wouldn’t negatively impact any behind-the-scenes efforts to gain his release. The Rubashkin family, upon hearing of this disabled boy’s gesture, were supremely touched and it gave them tremendous chizuk.

The process began and Avi Friedman was placed on a waiting list, as there were some others who had also chosen to meet the president as their “wish.” The Friedmans were contacted thereafter by the Rubashkin family and advised to pen a letter to the legal team stating Avi’s wish.

It was during the Aseres Yemei Teshuvah, about three months ago, when Avi and his parents sat at their kitchen table to write a letter addressed to Attorney Alan Dershowitz, encouraging him to keep up his fight on behalf of Sholom Mordechai and stating that they are aware of his efforts. The letter highlighted the injustice perpetrated against Sholom Mordechai. In the letter, Avi’s mother explained on his behalf that his disability has placed him on the receiving end of much kindness shown to him by organizations and others, and he wished to have the opportunity to give back and help someone else. Thus, his wish is to meet the president and ask him to pardon Sholom Mordechai Rubashkin. The letter added that the family knows the Rubashkins, from whose kindness they themselves had benefitted. It also mentioned that Avi couldn’t fathom how the Rubashkins are managing with an autistic child whose father is not home.

The Friedmans viewed the letter as merely a means of participating in the tzaar of another Yid and doing hishtadlus in the mitzvah of pidyon shvuyim.

And then, on Wednesday, December 20, Zos Chanukah, known as the day of the “gemar chasimah,” Sholom Mordechai was released from prison, his sentence having been commuted by President Trump.

In short order, Mr. Friedman received a phone call from Rabbi Zvi Boyarsky of The Aleph Institute, who stated that the Rubashkins wanted to meet him, his son and his family to thank them.

The letter written by Avi, it was explained, was actually lying on the president’s desk during the week of Chanukah.

Amidst the many efforts expended on behalf of Sholom Mordechai was a letter authored by a disabled boy from New York, who could have chosen any of a number of exciting and scintillating trips and gifts, but instead wanted a meeting with the leader of the free world so that he could plead for another Yid’s freedom.

We may never know the true role that this letter played in the end, but I surmised during a lengthy conversation with Mr. Friedman that perhaps it was the zechus of Avi’s very act of selflessness that carried enough weight in the Heavenly realms to bring about the yeshuah we had been praying and hoping for.

Reb Sholom Mordechai has been reunited with his family, as Klal Yisroel watches with tears in their eyes and hearts full of emotion. And somewhere among Klal Yisroel sits a disabled boy whose dream came true and whose merits we cannot fathom.

During his whirlwind return, last Tuesday, Reb Sholom Mordechai, his family and his attorney paid a visit to the Friedman home, where Sholom Mordechai met the teenage hero who had written a letter that made it to President Trump. They embraced and held each other’s hands, sharing emotions that couldn’t be expressed in words.

Looking on were Mr. and Mrs. Friedman, the proudest parents in the world.

But Mr. Friedman doesn’t just want this to be shared and forwarded as a touching story. He told me that he wants lessons to be learned about “mi ke’amcha Yisroel.”

“We should learn from my son that Yidden can help other Yidden, even if it means giving something up to do so,” said Mr. Friedman. “That is what this teenage boy did.

“Furthermore, you never know what the far-reaching effects of a little deed for someone else, like writing a letter, can be. Never underestimate the power of a seemingly small act.

“And finally, look at my son, a child in a wheelchair, who was able to accomplish what many powerful and influential people could not. Never underestimate people. The power of one person is inestimable.”

Avi told me that his tefillos this Chanukah were “answered in a real way.”

Some names have been changed, but all details have been verified with the parties involved.