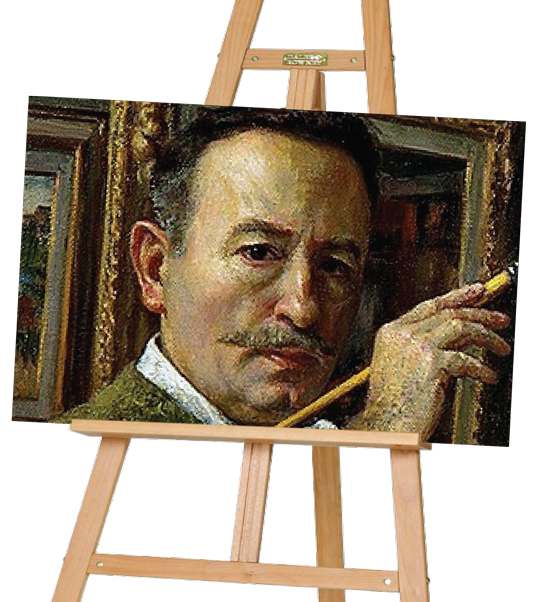 I was born in 1925 in a small town called Skiernewice, near Warsaw in Poland. I was the fourth child of Aryeh and Lisa Holtz and the baby of the family. My three siblings were all much older than me. My father, who was artistic, was a hat-maker and a furrier.

When I was five years old, my father drew a picture of a horse and sled in the snow for me. As I looked at the drawing and studied it, I thought it was wonderful. From then on, I kept begging my father to draw pictures for me. My family immigrated to Yerushalayim in 1935, when I was ten years old. We lived on Rechov Yechezkel in the Geulah neighborhood. I liked to go shopping in the market on Thursday nights with my mother when the gas lights were on in the streets. I wandered around Meah Shearim, looking and listening to the people. I grew up in this atmosphere, feeling a strong connection to Jewish art.

I studied at the Bezalel School of Arts and Crafts for two years, from 1945 to 1947. It was a commercial art school for those who wanted to make a living from art. So I studied lettering and poster work in a program geared toward commercial art.

However, I only wanted to do painting and wasn’t interested in money. My parents, especially my father, felt strongly that I should “make a living” from art. In 1950, I decided to emigrate to United States, where I attended the Art Students League in New York City for the next two years. There I felt that the other students were lacking in drive. It was very difficult for me when I first arrived in New York for financial reasons and because I only knew Polish, Yiddish and Hebrew but not English. Then my art instructor, Robert Philip, who greatly influenced me, helped me find friends and referred me to paint portraits.

My wife is Ruth Beck. Her family managed to miraculously escape from Europe to Eretz Yisroel just in time before World War II began. We were married in 1951 and have two children, our son Arieh and daughter Aliza. At first, I painted mostly portraits in order to support my family. I ended up living for the next sixty years in New York, mostly in the Washington Heights area of Manhattan. Still, we came back to Israel on frequent visits and for many years had homes in both cities. Now my wife and I live in Yerushalayim. Here I feel I am stepping on holy ground.

I began to paint street scenes and pictures of everyday Jewish life. I painted the alleys and markets I remembered from my childhood in Geulah and Meah Shearim, and also Jewish areas in New York, such as Williamsburg, Boro Park and Monsey. I experimented with abstract art for a while, but then resumed painting Jewish figures and street scenes. I feel my artwork is strongly connected to my beliefs: “You have to live that religious life to fully capture it on canvas.”

Over the years, painting slowly and carefully, I have produced hundreds of paintings in many different art mediums, oils, watercolors, felt pens, pastels, markers, ink, charcoal drawings and woodcuts.

Every morning, right after davening, I start to paint. I feel that my art is a gift from Hashem. I will often look at a painting later on and ask myself, “Did I do that?”

Years ago, I used to paint all day. Now I paint less, when the mood comes.

When I draw with pastels and watercolors, I work sitting down, but when I paint with oils, I have to paint standing up and need movement to work.

Some of my oil paintings have sold for over $100,000 and were exhibited in many art galleries, winning awards and recognition. Recently, a painting sold for $200,000 at auction. I am still amazed that people are buying my pictures. People even come from America to Eretz Yisroel to buy my art.

My parents lived to see my early success, but I wish they could have seen my later success as well. I remember how my father always advised me to “make a living” from my art. Still, there are about twenty paintings I keep in my home that I will never sell.