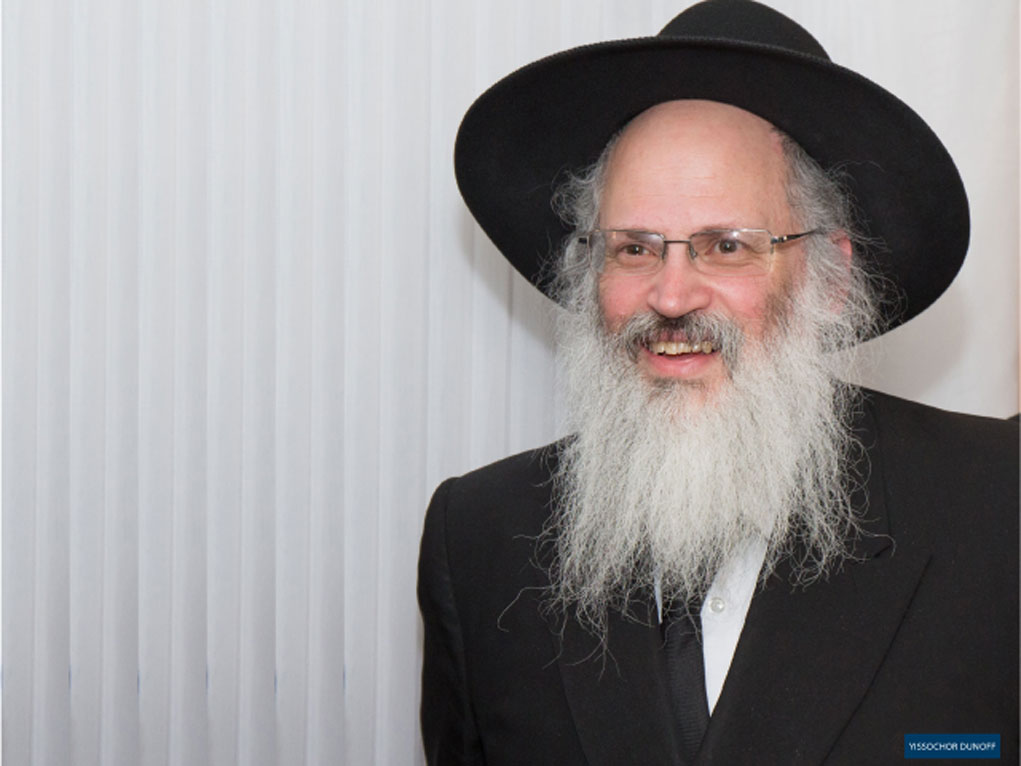 The heart refuses to accept and the hand cannot write what the mind is trying to process. A young rosh yeshiva, scion to a royal family and traditions, groomed his entire life for the position he attained and was excelling in, was suddenly taken from us. Widely respected and beloved, his tragic passing has left so many gasping in sadness and grasping for support.

As Rav Shmuel Yehudah Levin said in his final seudah shlishis shmuess, moments before his sudden passing, the Maharsha discusses that the 21 days that comprise the three-week period between Shivah Assur B’Tammuz and Tisha B’Av are days of judgment comparable to the 21-day period between Rosh Hashanah and Hoshanah Rabbah.

We began these days of mishpot with shocking din. We are davening for so many sick people, beseeching Hashem that they be granted a refuah sheleimah, but for Rav Shmuel Yehudah ben Rav Avrohom Chaim, we were not given the opportunity.

The Gemara in Yevamos (117a) discusses the posuk (Mishlei 27:19) which states, “Kamayim ponim el ponim, kein lev ha’adam el ha’adam – Just as water reflects the image of the person who is looking at it, so too, the heart of a person is reflective of the person’s attitude to the person he is dealing with.”

Rabi Yehudah says that the posuk is referring to the study of Torah.

The Rambam in Hilchos Talmud Torah (5:17) states that a rebbi must be careful with his talmidim and must love them.

Rav Shmuel Yehudah was a quintessential rebbi to his talmidim, selflessly giving of himself for their betterment. Each talmid felt like a son, loved by a rebbi who cared for him. He was always available for his talmidim, always learning with them and encouraging them to grow in Torah and avodah.

The Gemara in Moed Koton (25b) states, “Ki noch nafshei d’Rabi Yaakov ischamiyu Kochavi b’yemomah – When Rabi Yaakov was niftar, stars were visible by day.” Perhaps we can explain that after the passing of Rabi Yaakov, the efforts he put into his talmidim became evident as they shined. The Gemara was praising Rabi Yaakov that he had raised such great talmidim that each one grew to be a star.

Many question why the passing of tzaddikim is compared to the parah adumah, which cleanses from tumah but does not forgive. Why is it not compared to any of the various korbanos that are intended for kapporah?

In his hesped for Rav Tzvi Hirsh Rabinowitz, the son of Rav Yitzchok Elchonon Spector and his successor as Kovna Rov, Rav Yitzchok Yaakov Rabinowitz (no relation) of Ponovezh, offered the following explanation:

He cited the Mishnah (Parah 3:11), which states that the ash of the parah adumah was divided into three portions. One was saved l’mishmeres, one was used to sanctify kohanim, and one was used to sprinkle upon those who had become tamei and needed to be purified.

He said that when a tzaddik passes away, he leaves behind three distinct inheritances. The first is his neshomah, which will remain under the Kisei Hakavod. This is akin to the eifer l’mishmeres. The second is the chiddushei Torah he leaves behind for the kohanim, meaning the talmidei chachomim and rabbonim who dedicate their lives to Torah and are compared to kohanim. Their third inheritance is their middos tovos, which all of Klal Yisroel can inherit from them to study and follow in their ways.

And finally, he said, another reason that misas tzaddikim is compared to parah adumah is because to receive forgiveness through the other korbanos, the supplicant doesn’t have to perform any action; everything can be done by the kohein. But in order to be purified by the parah adumah, the person who became impure must perform an action with the eifer haparah.

Rav Itzele Ponovezher explained that in order to receive the kapparah that is available upon the passing of tzaddikim, we must do something. We must actively work on ourselves to adopt the fine middos and acts of the tzaddik whose passing we mourn.

Rav Shmuel Yehudah Levin was such a person, leaving behind much Torah for his talmidim and talmidei chachomim to study, and fine middos which everyone can learn from and emulate, as his neshomah has gone to rest under the Kisei Hakavod.

This week, we lain Parshas Pinchos, which begins with the enduring kana’us of Pinchos. The same act that caused others to become so traumatized that they didn’t know what to do caused Pinchos to be bold and courageous. His kana’us lives on for all time as one of passion and commitment, epitomizing the instincts and reactions of a servant of Hashem.

The parsha continues with a count taken of each individual Jew in Klal Yisroel. Each person has a mission. Every person has a tachlis in the world and it is our job to realize that.

Pinchos took a stand when others did not, and in so doing formed a covenant with Hashem.

The parsha reinforces this message with the counting of the Bnei Yisroel. Every Jew counts. Everyone can do what Pinchos did, acting as a lone soldier, demonstrating the strength of character and devotion to bring glory to Heaven. Each individual has intrinsic value. The counting reminds every person that he has the ability to make a difference. You matter. Every person matters.

The avodah zarah of Baal Peor diminished man and caused him to believe that humankind is a small being with limited abilities that he is unable to face or overcome (see Chasam Sofer in this week’s parsha). Thus, the yeitzer hora reduces people to the level where they think they are inconsequential, their actions are inconsequential, and whatever they think or do has no meaning or importance.

Pinchos maximized his abilities and withstood the entreaties of the yeitzer hora to stand by the side and let someone else do what had to be done. He realized his shlichus and with achrayus acted upon it.

It is because of Pinchos and people like him in every generation that our nation has endured to this day.

Rav Shmuel Yehudah was such a person. He stood out because of his sense of achrayus, as he carried out his shlichus of harbotzas Torah. He cared about every talmid. He cared about everyone in his yeshiva and in his city. Following in the footsteps of his great father and grandfathers, he didn’t sit off to the side and only concern himself with his own dalet amos and growth in Torah and mussar. Rather, he was makriv himself for the tzibbur.

Shekulah misas tzaddikim k’sereifas Bais Elokeinu. Klal Yisroel now adds a new tragedy to the long litany of tzaros that occurred during the Three Weeks. We have lost a young rosh yeshiva in the prime of his life, who brought up many hundreds of talmidim and propelled them to excel and realize their shlichus as he was becoming increasingly involved in inyonei haklal. Many saw in him a future national leader.

Every Jewish tragedy has its roots in the churban, which we mourn during these weeks of sorrow. We mourn the destruction of the Botei Mikdosh and mourn the passing of Rav Shmuel Yehudah and recognize what we are lacking. We look into ourselves and dedicate ourselves to fulfilling our own individual shlichus of being marbeh kevod Shomayim and growing in Torah and middos. We do not get deterred as we seek perfection and success.

Kol hamisabel al Yerushalayim, anyone who mourns the destruction of the holy city and the Bais Hamikdosh, zocheh veroeh b’simchasah, will merit seeing its joy. Those who appreciate gadlus baTorah and are respectful of their rabbeim and morei derech, roshei yeshiva and rabbonim, in their lifetimes; those who mourn the passing of talmidei chachomim and feel the pain of their loss, indicate that they are serious about their shlichus in this world and will be zoche to grow and excel in Torah and avodah, helping prepare the world for Moshiach Tzidkeinu, when we will be reunited with the neshamos that now rest tachas Kisei Hakavod and celebrate the rebuilding of the Bais Hamikdosh.