How The System Failed Sholom Rubashkin 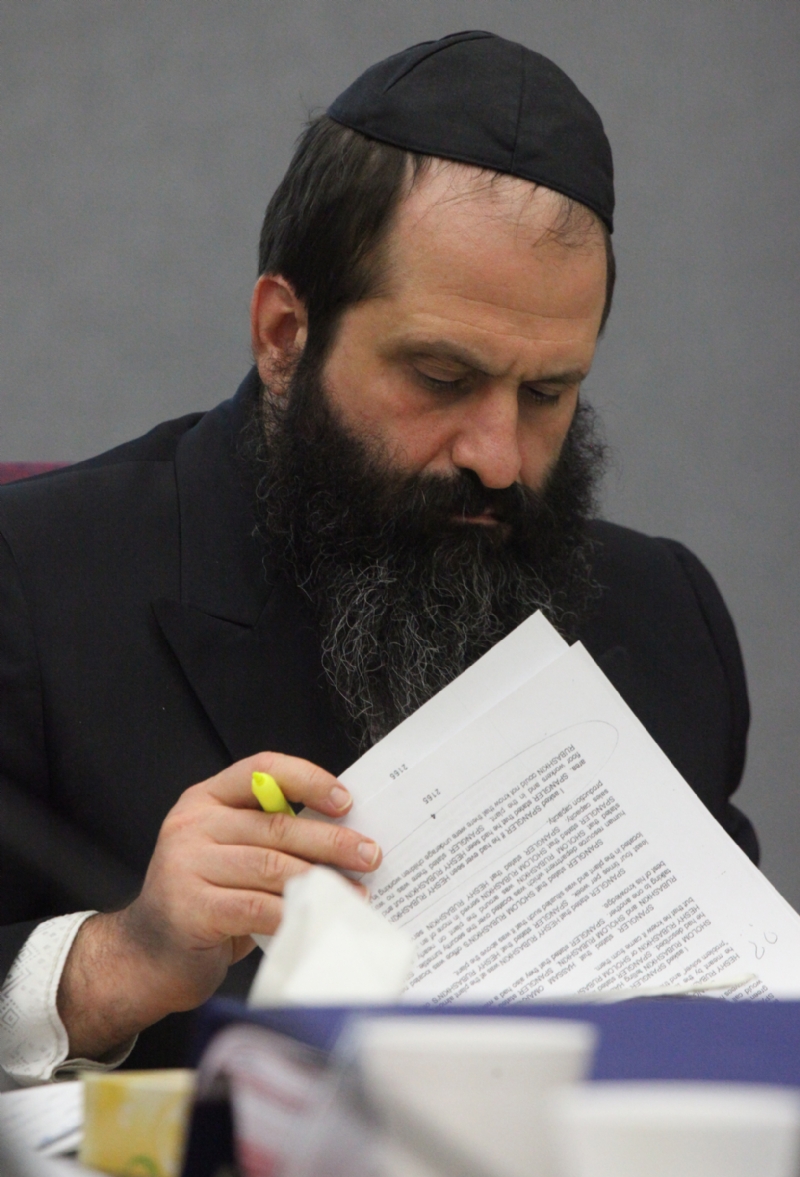 A hard-hitting article in the prestigious National Law Journal calls the Rubashkin case â€œtragic and frightening,â€ citing chilling details of federal prosecution and trial, and saying the FOIA laws [Freedom of Information Act] failed him. FOIA laws were meant to ensure open government and the transparency of the criminal justice system. Had the government complied with Rubashkin's requests for crucial documents in time for his trial, revelations of misconduct on the part of the judge and federal prosecutors that emerged from ICE documents would have profoundly affected his chances of a successful appeal.
Instead, the National Law Journal article points out, the government’s stubborn opposition to releasing the material-resulted in one delay after another. When the documents were finally produced, their value was severely compromised.
DEADLINE FOR GOV’T RESPONSE TO SUPREME COURT PETITION EXTENDED

The article, co-authored by law professor Robert Steinbuch and former U.S. Attorney Brett Tolman, appeared as the deadline approaches for federal prosecutors to respond to the Rubashkin “cert” petition to the U.S. Supreme Court.

The government twice requested an extension of the deadline, originally set for May 4. The current deadline is July 4. After federal prosecutors file their response the high court will weigh the petition.

The petition, filed by renowned attorneys Paul Clement and Nathan Lewin, asked the Supreme Court to review the Rubashkin case because of erroneous rulings by the Eighth Circuit Court of Appeals.

The appellate court in its Sept. 2011 decision refused to consider evidence of blatant judicial and prosecutorial misconduct, discovered after the trial, which rendered the trial a mockery of justice.

The petition also seeks relief from the Supreme Court for the draconian 27-year sentence imposed by Judge Linda Reade. Both the trial judge and the appellate court “ignored the eye-popping disparity of the sentence,” it said.

The petition cited the Eighth Circuit’s failure to address the argument that the trial judge had, without explanation and against federal sentencing law, issued a sentence that was wildly out of proportion to the offense.

“Sholom Rubashkin was given an unusually harsh sentence for his actions. In my entire career,” Paul Clement said in a statement to the press, “I cannot recall a similar instance of harsh punishment for a non-violent, first-time offender with a long record of charitable service to his community.”

Tolman and Steinbuch review some of this background in the National Law Journal article. They say the Rubashkin case stands out for the glaring injustices committed by “a federal judge who inappropriately communicated in secret with government agents and attorneys,” robbing the defendant of a fair trial.

Although the injustices in the Rubashkin case should have been righted by the Eighth Circuit Court of Appeals, the authors note the well-known fact that appellate judges are too partial to trial judges, and tend to affirm the judge’s decisions even in the face of compelling evidence that the trial judge has erred.

The difficulty of overturning a wrongful sentence is massive, the authors note, quoting the following advice from a judge: “Don’t get your sleeve caught in the criminal-justice system, because it’s really hard to get it out, regardless of guilt or innocence.”

The purpose of the Freedom of Information Act was to protect Americans from unfair or corrupt criminal justice practices by making it impossible for such practices to flourish in secrecy. FOIA laws are meant to promote transparency. But the government’s “knee-jerk” resistance to most FOIA requests greatly weakens this important tool.

Rubashkin attorneys were forced to file a federal lawsuit to force the government to release the material. “The result was that the critical documents were provided only after Rubashkin’s sentencing – directly affecting the defendant’s ability to pursue justice,” Tolman and Steinbuch wrote.

The Eighth Circuit denied the Rubashkin appeal because of the late timing of the newly discovered evidence. It should have been acted upon earlier, the judges said.

The Eighth Circuit unreasonably blamed Rubashkin for the delay in producing this evidence. Laying the fault on him included putting “the heightened burden on the defendant to show his evidence would have resulted in an acquittal.”

Since the delay was caused solely by the government’s stubborn secrecy and opposition, “in violation of FOIA,” the authors note, why should Rubashkin have to suffer the consequences?

Although FOIA laws were meant to protect against tyranny, the article goes on to say, the inertia and foot-dragging endemic to the American criminal justice system emasculate the very important protection for Americans.

“BAIL RESTRICTIONS ONLY FOR JEWS”

The authors emphasize an especially odious feature of the Rubashkin case that smacked of religious discrimination; a ruling that they say “articulated special bail restrictions only for Jews.”

Tolman and Steinbuch are referring to the decision to deny Sholom Mordechai bail prior to his trial because of the presumption that as a Jew, he might try to avoid prosecution by fleeing to Israel. That ruling, by implication, was seen as a slur on American Jews as a group.

It took over two months, during which Sholom Mordechai remained incarcerated, before this ruling was overturned and he was released on bail (prior to his trial). Precious time needed to prepare his defense was squandered by this wrongful incarceration.

The state trial put on display a case so fraudulent, that prosecutors were unable to make a single one of the original 9311 charges stick. The jury’s sweeping acquittal on all counts dealt the state a humiliating defeat. The verdict told volumes about the case’s total lack of merit–and raised troubling questions about why it was ever brought to trial in the first place.

Brett Tolman is familiar to Rubashkin supporters from a high-profile solidarity event in the Five Towns in Dec. 2010, at which the former U.S. Attorney of Utah was a key speaker.

Tolman, who also served as counsel for Crime and Terrorism in the Senate Judiciary Committee, was one of the first legal experts to shine a spotlight on evidence that justice was perverted in the Rubashkin case. His speech anticipated several of the arguments later used in the appeal to the Eighth Circuit.

He said, “one doesn’t have to be a lawyer to realize that the magnitude of the interactions between the judge and the prosecutors in this case crossed permissible bounds.”

“In my ten years in the Department of Justice, I never encountered anything close to this level of cooperation between prosecutors and the judge in a criminal proceeding,” Tolman said at the Five Towns event.

“The very essence of the legal foundation guaranteeing due process and civil rights is that the executive and judicial branches of government remain separate,” he said. Judicial neutrality is the cornerstone of a fair trial.

“But the checks and balances that are supposed to protect a defendant’s constitutional rights were non-existent here,” Tolman said, in a foreshadowing of the appeal.

The Rubashkin case presents issues that deeply divide the nation’s courts of appeals and urgently need guidance, Rubashkin attorneys argued in the cert petition to the Supreme Court. The way the case has been handled impacts public confidence in the fundamental fairness of our criminal justice system.

“In short, when a criminal defendant discovered new evidence suggesting the trial judge should never have sat on his case, he was told that the courts would not even consider the evidence because it did not go to guilt or innocence.

“And when he presented evidence that the sentence he received was wildly disparate, he was told that the courts need not even explain the basis for the disparity.

Not only are these results “doubly unjust,” the petition said, “they implicate issues on which the nation’s courts of appeals are at cross purposes and “desperately call for a plenary review from the nation’s highest court.”

Indicative of public concern over injustices in the case, the brief cited the more than 52,000 signatures on the White House’s “We the People” website, urging an investigation into misconduct by the prosecution.

“Furthermore, 50 members of the U.S. House of Representatives have written letters to Attorney General Eric Holder, urging an investigation into the allegations of prosecutorial misconduct,” noted the brief.

It cited the letter signed by 75 U.S. Attorneys and law professors and sent to the DOJ Office of Professional Responsibility, joining the call for an immediate investigation into allegations of ex parte communications between Judge Reade and prosecutors.

As is well-known, Attorney General Holder ignored all these communications to the DOJ, opting to stonewall in expectation of seeing the case fade into obscurity. But the filing of six prominent amicus briefs with the Supreme Court supporting Sholom Rubashkin has made it clear that the case continues to roil the highest echelons of the nation’s legal community.

The Rubashkin case remains a hot-button issue in the religious community, with tens of thousands of people treating Sholom Mordechai’s plight as their own, ardently praying on his behalf and that of his family as they await further developments.