Help Us To Be Omeid Benisayon-Address Given by Rabbi Eliezer Sorotzkin, Director-General of Lev L’Achim, at the Lakewood Asifa 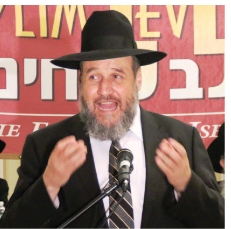 During the past year in Eretz Yisrael, the olam haTorah and P'eylim / Lev L'Achim have been faced with three extremely difficult nisyonos. The first nisayon is the fact that the Israeli government has been delegitimizing and inciting the general public against the olam haTorah, the bnei hayeshivos, and the chareidi population. The media has been drafted in full force toward this vicious and heartless cause, portraying yungeleit and the bnei hayeshivos as parasites living off the working man. The Torah educational system has been presented as producing illiterates, lacking even the most basic education in general studies. Basically, they have painted a picture of us as wretched human beings, who allow our children no future.

At first, we thought there was no point in continuing with our kiruv and enrollment work. Who would even talk to us if the yungeleit were portrayed by the media in such a negative light? Who would agree to listen to Lev L’Achim’s devoted enrollment staff? And who would want to send their child for the Torah education so defamed by the honorable Minister of Education, who has made it his mission to destroy us?

The reality, however, was completely to the contrary. The Israeli population has accepted the yungeleit gladly and lovingly, and has continued to befriend them. What is actually going on out there is completely different than what we had imagined. Families say to the yungeleit, “You are not like those people that the media speaks about. You are just fine.” With the exception of the “elites,” the government, the media and the courts, the average Israeli does not hate frume Yidden.

At the beginning of the year, we went to Rav Aharon Leib Shteinman and told him that we were afraid we would not succeed in our endeavors when, besides the great financial difficulties that Lev L’Achim faces, there was this terrible incitement. The rosh yeshiva instructed us to continue with our full spectrum of activities: “At a time when they want to take away from kevod Shomayim, to take away benches from the bais medrash, you must increase kevod Shomayim.” And so it was. During the winter months, we increased the activities in every one of our divisions — more shiurim, more yungeleit learning with people, and more midrashot for youth.

The second nisayon is that of poverty. The government cutbacks targeted, first and foremost, the kollel yungeleit, Lev L’Achim’s backbone. The kollel stipends decreased drastically. The cutback in kitzvat yeladim (government child allowances) made monthly income significantly less. On the other hand, tuition went up. The price of daycare, a significant expense in the life of yungeleit, especially those with large families, shot up drastically due to another government attempt to stifle limud haTorah. Many kollel families literally do not have money to buy food. The vivid description of a mother cutting an apple into four — for four children — has become a reality.

We thought that in such a situation, the yungeleit would go out to look for parnassah and would not be able to continue their kiruv work. We could not imagine that they would have any desire to go out and contribute their precious time to the secular society that was hurting them on a personal level. What happened in actuality astounded us. Theyungeleit continued to go out to learn with people, with increasingly greater results. More and more new kiruv centers were opened. New night midrashot were established in many neighborhoods — on Har Hakarmel in Haifa, in Maaleh Adumim, in Tel Aviv, in Cholon, and in other places as well.

These very yungeleit who can barely afford bread for their own families — almost every one of them – give a monthly donation to Lev L’Achim. Their donations may be small, but they make every effort to participate. We have no doubt that, at this time, Hakadosh Boruch Hu says to the famaliah dileih: “Chazu chazu bonai chavivai! Look! Look at My dear children, who forget their own pain, their financial difficulties, ve’askin bechedvasa dili,” and involve themselves in My joy, learning with Hakadosh Boruch Hu’s children, all over the land, children who are tinokos shenishbu, who have been lost and are distant from Him.

The third nisayon is the war. Over the last few weeks, there has been almost no city in Eretz Yisroelwhich has not had air-raid sirens and missiles or pieces of missile rain down on them. It is only because of Hashem’s chesed that there have been almost no casualties from these missiles. We thought that at a time like this, yungeleit, who have families of young children, would not be able to leave their wives home alone with the children and would not go out for their usual kiruv activities. We thought that people would not come to the night kollelim for kiruv, that young people would not come to the midrashot. But we were wrong. It was just the opposite.

It was amazing! Last week, I was in Kiryat Sefer. I stood at the entrance to the city, where the vans of P’eylim leave – to Ramleh, to Lod, and to the rest of the cities and settlements. I stood at the gathering place for the women volunteers. Just a short while before, there had been air-raid sirens in the Modiin area. I thought to myself, “Which mother would go out at a time like this and leave the children with a young babysitter or a kindhearted neighbor?” To my surprise, there was almost no empty seat on the bus.

R’ Yossi Levy, a coordinator for Lev L’Achim, told me that he is now involved in enrolling children in the Shilo Torah school in Yaffo. It is a mixed city of Jews and Arabs. There are maybe even more Arabs than Jews. He told me that in the mixed neighborhoods, even during “regular” times, people close themselves up in their homes at night and do not open the door. Now, with the air-raid sirens, there is nothing to talk about.

“Yesterday,” he said to me, “I was supposed to go to a family that I had already been to. I made up with them by phone that I would come. I was on a street nearby with a yungerman who goes with me for home-visits. All of a sudden, there was a siren. We ran into one of the buildings, into the stairwell.”

In old buildings like this one, there are no bomb-shelters, and when there is a siren, the residents go into the stairwell, which is the maximum protection they can hope for.

“We were standing side by side with the neighbors, waiting to hear the ‘Boom!’ It was not long in coming. We all breathed a sigh of relief that, boruch Hashem, we had not been the target. And then, one of the neighbors looked at us and asked, ‘What are you rabbonim doing here now?’

“‘We came to offer parents a Torah education for their children,’ I said to her.

“And she said to me, ‘Please come to us — on the top floor. I have two children who am I afraid will be ruined here in our neighborhood. Come and take them to a religious school.’

“They opened the door for us even at night.”

In all three of these nisyonos, “heim chashvu leraah, veha’Elokim chashava letovah – they planned to do bad and Hashem made it turn out good.” We have withstood all three nisyonos, and we are still holding strong.

But there is one nisayon that may, chas veshalom, be our downfall. That is the nisayon of funding. We are afraid that, chas veshalom, this nisayon may do us in. If Lev L’Achim does not have money to put gas in the cars, the enrollment officers cannot bring children to schools. If there is no money for transportation, the yungeleit cannot go out to do their work.