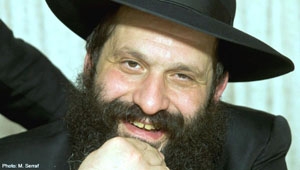 The government's attempt to silence the voices of friends-of-the-court [amicus curiae] in the Rubashkin case undermines the American justice system, argues an influential publication, Bloomberg Law Reports. The authors sound the alarm about an unprecedented move by federal prosecutors in Iowa that should concern all Americans. In their scathing report, â€œThe Troubling Implications of the Government's Recent Effort to Block Amicus Curiae Briefs,â€ the authors criticize the government for trying to block three prominent legal organizations that argued powerfully in separate briefs for Sholom Mordechai Rubashkin's right to a new trial.

The briefs by the ACLU and the Washington-based NACDL and WLF accuse the Iowa U.S. Attorney’s office and Chief Judge Linda Reade of engaging in months of improper ex parte discussions.

In a stunning array of arguments citing constitutional violations by federal prosecutors and the presiding judge, the amicus curiae briefs expose the flaws and misconduct in the prosecution, trial and sentencing of Sholom Mordechai. The briefs unanimously call on the Eight Circuit Court of Appeals to vacate his sentence.

The practice of filing amicus curiae is a time-honored feature of American justice and has traditionally been respected and valued by federal courts. Brazenly disregarding this tradition, federal prosecutors in Iowa argued that the briefs filed in support of Sholom Mordechai are a waste of the court’s time, because they present nothing new and merely repeat arguments raised by the appeal.

Unable to defend this assertion in their Motion to Resist, the Iowa U.S. Attorney’s office resorts to a clumsy U-turn, admitting that yes, new arguments have in fact been presented, but they do not justify the briefs, because they are “so lacking in merit that they were deliberately passed up by the other party’s lawyers.”

The authors of the Bloomberg article, Anthony Franze and Stanton Jones of the prominent Arnold and Porter LLP firm, dismiss the government’s motion as a defensive, “knee-jerk reaction by an isolated [Iowa] U.S. Attorney smarting from allegations of misconduct.”

“This is just the latest twist in a prosecution that has already garnered national criticism,” the article said. “We do not know whether anyone at main Justice approved or even was informed of the government’s resistance to Rubashkin’s amici [briefs].”

The authors cite concerns that should the government’s resistance be endorsed by the Eighth Circuit Court of Appeals, that precedent could instigate a troubling departure from accepted norms of jurisprudence.

An amicus curiae educates the court on points of law that are in doubt, or raises awareness about some aspect of the case that the court might otherwise miss. The practice has traditionally played a role in shaping federal legislation in many high-profile cases.

The filing of an amicus curiae has to be with the consent of both parties in the litigation. It operates not as a legal right but as a privilege granted by the court. Even in rare cases when one party withholds consent, in the case of a brief filed by a respected organization, the court generally grants permission to file the brief.

According to the article, the three advocacy groups that weighed in on the Rubashkin case have all played an important role in providing valuable assistance to the federal judiciary in the past.

“The ACLU often is singled out for its amicus contributions in landmark cases; the NACDL’s briefs likewise have helped shape modern Supreme Court jurisprudence and the WLF is cited as one of the organizations whose briefs receive the most attention from Supreme Court law clerks,” the authors stressed.

The move to silence the friends-of-the-court in the high profile Rubashkin case “raises the specter of a sweeping policy shift away from the government’s traditional open door approach to amicus briefs.”

It could ultimately “shut the courtroom doors to organizations and individuals who have proved themselves capable of contributing valuable legal assistance,” thus altering the judicial landscape in this country.

The Bloomberg Law Report article went on to shred, one by one, the arguments offered by the Iowa U.S. Attorney’s office for opposing the amicus briefs. It exposed the hubris of federal prosecutors who show disdain for time-honored legal norms.

It also uncovered the hypocrisy of federal officials trying to eliminate a practice in which the United States government itself engages more frequently than any other party. The U.S. government takes full advantage of the rules allowing it to freely participate as an amicus (friend of the court), without consent of the other party, the article explained.

In the Supreme Court’s 2009-10 term alone, for instance, the government filed amicus briefs in more than half of the cases [in which it was not one of the litigants].

The restrictive standard advocated by the Iowa U.S. Attorney’s office, if adopted by the Eighth Circuit, could have serious ramifications. It could ultimately result in the amicus curiae practice becoming the exclusive domain of the United States government, resulting in the undermining of an important feature of the adversarial system upon which the American legal system rests.

Turning Justice Into A Charade

The Bloomberg article reviewed some of the strongest arguments raised respectively by the ACLU, the NACDL and the WLF. Of the three, the harshest one was the NACDL [National Association of Criminal Defense Lawyers].

The brief asserted that the ICE documents support the claim that Judge Reade was prejudiced in favor of the Government and thus must disqualify herself.

“She should not have discussed strategies and the ongoing investigation and other issues with prosecutors [and then presided at the trial],” the NACDL brief said. The brief said that Reade compounded this wrongful conduct by concealing it from the defense.

Even worse, when confronted by disclosures of her behavior in the ICE documents in Sholom Mordechai’s new-trial motion, Reade sweepingly dismissed the allegations as untrue.

She was obligated by law to turn the case over to an impartial judge as requested, but refused to do so. Instead, she accorded her own denials of wrongdoing the status of “facts” even though they contradicted assertions in the ICE documents.

She thus became the key “factual witness” in the case and used her own testimony about what she did or didn’t do to arrive at a ruling in favor of herself, the brief said.

The NACDL brief harshly criticized this charade. It called attention to Reade’s clear violation of ethical and legal guidelines in her repeated denials of wrongdoing and in insisting her behavior was above reproach.

It so demolished Reade’s credibility – and, by association, that of the Iowa prosecutors – that the government’s response in trying block the brief can be viewed as a desperate exercise in survival.

If Reade is found to have violated the constitution by collaborating with federal prosecutors, what does that say about the Iowa Attorney’s office who enabled and colluded with it?

Legal advocacy groups like the above-mentioned groups and a growing number of congressmen have rallied behind Sholom Mordechai’s appeal because they see it as a test case with broad implications for the American public.

Like Sholom Mordechai Rubashkin, many have fallen victim to prosecutorial or judicial misconduct and an unbalanced sentencing system. If left unremedied, the failure of judicial safeguards in the prosecution, trial and sentencing phases of this high profile case has chilling implications for all Americans.
Twitter
WhatsApp
Facebook
Pinterest
LinkedIn
PrevPreviousJ Street Stumbles as it Celebrates Annual Conference
NextLife is Not a Popularity ContestNext