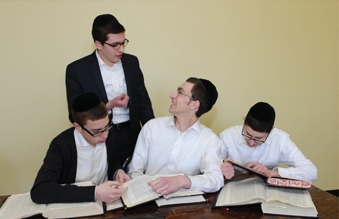 Nochum is gone. Can it really be? We always thought that Nochum would pull out of it somehow. We hoped that his doctors would find a cure for the horrible mysterious illness that robbed Nochum of his ability to walk, then sit, and, ultimately, even breathe. We knew that things would work out for the best. He would defy the odds. It would be a long recovery, but things would be okay. And who could blame us?

Certainly not Nochum. It was he who always seemed to have a positive spin on things. Not just any things, but the terrifying prognosis of a frightening future.

Nochum wasn’t fazed. He was suffering, in great pain, but optimistic. So much so, that I began to call him Nochum Ish Gam Zu, after the legendary Tanna known for his eternally optimistic view of life. Nothing fazed him. No matter how grim the situation seemed, Nochum Ish Gam Zu’s faith carried him.

The Gemara in Maseches Taanis (21a) recounts how Nochum was sent to deliver a package of jewels to a monarch. Before he had a chance to present it, a band of thieves stole the treasure and replaced it with dirt. When the king opened his gift, he was disturbed to discover its contents. But Nochum was not worried. Sure enough, Eliyahu appeared disguised as an officer of the court. As the king was about to punish Nochum for his mockery of the kingdom, Eliyahu suggested that perhaps the dirt was similar to Avrohom’s dirt, magical in a way, and would prove invaluable as a weapon in battle. Sure enough, Nochum was saved.

We thought the same would happen with our beloved Nochum. A miracle would save him.

Alas, it was not meant to be.

I developed a close friendship with Nochum in Camp Kol Torah, where his keen eye and unusual talents enhanced our summers. As a master photo/videographer, he took great pride in capturing the moment, improving the angle and making things look just right. It was often better than the reality. This, of course, was nothing more than a metaphor for his ayin tovah. He saw things as Nochum Ish Gam Zu. He saw angles of Hashem’s hanhagah that would have confounded and confused the rest of us.

He captured moments of inspiration to better himself and others. Where others saw dirt, Nochum saw diamonds. And even if reality would prove him wrong, he utilized the dirt as a weapon to tackle the obstacles of life.

The Tanna, Nochum Ish Gam Zu, would face greater challenges later in his life. He became completely incapacitated, relegating him to his bed. Blind, crippled and covered in boils, Nochum continued to see the Hand of Hashem, attributing his misfortune to the consequence of the one time he delayed in helping a poor man.

Our Nochum made his namesake quite proud; his ironclad emunah was so very humbling.

One Erev Shabbos, I called Nochum a few moments before shkiah. He was calm, but, I sensed, a bit lonely. I told him that the Nesivos Shalom wrote a letter to a young bedridden chossid. It was Purim and he knew that the bochur would be down. He assured him that if they would think of each other, distance of place, person and time could not prevent them from being with one another.

I thought of Nochum that entire Shabbos. I could sense his presence. I could see his beautiful, shy smile. We were together.

We spoke before Simchas Torah and I assured him once more that we would think of one another. As I held the Torah, I thought of Nochum and the incredibly devoted bochurim who would be walking miles to spend Simchas Torah together with him. They gave him the gift of Chosson Torah.

What a priceless treasure for a young tzaddik, whose only kallah in this world would be the Torah Hakedoshah.

May I humbly suggest that now we do the same.

Nochum, you are in another place, a beautiful one at that. No longer tethered to a world of restrictions, you will once more be able to stand, smile and even dance to the melody of ruchniyus, the song of your neshamah,

You have changed many lives. My brachah of Asher Yotzar will never be the same. Neither will my home. Nor will countless others.

I had the privilege of visiting Nochum when he was in Hopkins for a short while. I was hoping to give him some strength and encouragement. It paled compared to what I received. A few of his close friends made the trip from Lakewood. One brought a guitar. We shmoozed and we sang. It was surreal in a way. There we were, sitting together, threatened by a medical mystery, a young man, pricked countless times by relentless needles, overcoming it all.

How fitting was that scene. Surrounded by friends, ignoring the pain and worry, Nochum smiled away. As we were about to leave, I held Nochum’s hand. I squeezed it and told him that everything was going to be okay. I don’t know if I really thought so, but Nochum never wavered. Never doubted it for a moment.

I waved goodbye. He smiled.

That was the last time I saw him.

Nochum, we will miss you greatly. But we will never forget you.