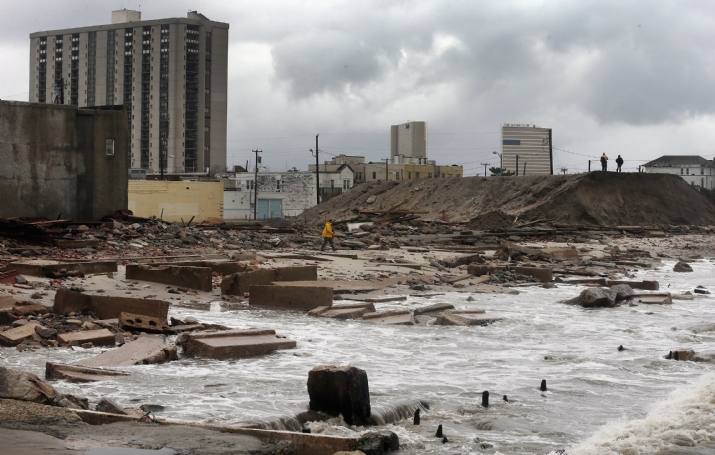 Jews across the tri-state area are still dealing with the aftermath of Hurricane Sandy, which brought to a halt the usual hustle and bustle of busy communities. Yeshivos and schools in Brooklyn, the Five Towns, Monsey and Lakewood were closed Monday and Tuesday, with tens of thousands of people stuck in their homes without power. In Brooklyn, Councilman David Greenfield opened his district office on Monday and Tuesday to help his constituents as Hurricane Sandy reached New York City.
Anyone who needed help with downed power lines, fallen trees, power outages or flooding was urged to first call 311 to submit their complaint to the city and receive a reference number before calling Greenfield’s office.
“My number one priority as an elected official is to be there for people when they need me most,” said Greenfield. “I am very proud that whatever gets thrown at us, my office is always open to help residents. This is especially important and critical today in the aftermath of the dangerous and destructive storm we witnessed.”

Greenfield spent the majority of the storm’s duration communicating with constituents and city officials throughout the night by phone, e-mail and Twitter, which he utilized to constantly provide updates.

Greenfield urged residents to be cautious when leaving their homes, especially in light of reports that two people were tragically killed by a falling tree Tuesday morning while walking along Ditmas Avenue near East 18th Street.

In the Five Towns, the Achiezer organization, under the leadership of Rabbi Baruch Ber Bender, issued a strong directive on Sunday for residents to evacuate the entire Far Rockaway-Bayswater area.

“That means that anyone in the 11691 zip code is officially required to evacuate,” Achiezer said. “Additionally, there is now a mandatory evacuation for all Nassau County flood zones. This includes the entire Inwood, Lawrence, Cedarhurst, Woodmere and Hewlett communities. While it is not our job or mandate to enforce this evacuation, we strongly urge everyone to follow these orders.”

Every school in the Far Rockaway-Five Towns area canceled school as the community hunkered down ahead of the storm.

Achiezer’s hotline was manned 24 hours a day and the organization remained in contact with Hatzolah, Nassau County Office of Emergency Management, Long Island Power Authority (LIPA), and the office of Assemblyman Phil Goldfeder.

On Monday afternoon, because of the dangerous conditions, Achiezer strongly advised that residents who hadn’t evacuated should not attempt doing so at that point, as numerous roadways were closed or flooded. In addition, the danger of falling trees and power lines significantly increased as the day progressed. At 7 p.m. Monday, the Marine Park Bridge and the Cross Bay Bridge closed.

Tuesday morning, residents in the Five Towns, many of whom had been without power, awoke to find fallen trees and debris on their houses, cars and other property. Calls poured in to Achiezer’s office for assistance. Locals asked if they can return to their neighborhoods.

“We urged people not return to their neighborhoods at that point,” Rabbi Bender told the Yated, “as there were dozens of inaccessible streets, downed live wires, and numerous downed trees, and it was simply not safe. We also received calls from concerned family members regarding relatives they could not reach. Landline phone service was down, and several major cell carriers were down as well.”

On Tuesday, LIPA held a conference call with community leaders and officials to discuss power restoration for the Five Towns, predicting that the power would be out until at least Shabbos.

“It is for this reason that we strongly urge all residents who are able to do so to make alternate living arrangements until power is restored,” Rabbi Bender said. “For those who need, there is a fully operational kosher shelter in West Hempstead, located on Nassau Boulevard.”

Certain roads in the area, such as Brookville Boulevard, portions of Rockaway Turnpike, and sections of the Rockaways still remained impassable as the Yated went to print. Other roads, as well as most bridges, were gradually being reopened, but there were numerous downed trees and wires throughout most of the area, and askonim were urging extreme caution to be exercised when traveling on all roads.

Achiezer told the Yated that all schools and yeshivos in the Five Towns would be closed on Wednesday.

A group of Bayswater representatives were working on preparing a potential food distribution center should the supermarkets and food supply sources remain closed.

Askonim in all communities encouraged residents to remain calm. In anticipation of the impending storm, on Sunday, a teleconference was held to provide advice to parents on how to prevent undue fear and panic among their children. A “Pre-Hurricane Sandy Anxiety Teleconference” hosted by Relief Resources featured Anxiety & Fear Specialist Binyomin Halpern. Chai Lifeline also released guidelines for parents dealing with fear and panic among children.

In Lakewood, Police Chief Rob Lawson told local residents to stay off the roads as the hurricane hit.

“Only essential personnel should be driving now,” he said in a message to the community on Sunday, adding that residents should only call police in case of emergency.

On the eve of the hurricane, Lakewood’s mayor, Menashe Miller, along with Committeeman Meir Lichtenstein, the Emergency Services Liaison, met at the Lakewood Municipal Building with the Lakewood Office of Emergency Management and other officials to prepare for the storm. Present at the meeting were representatives of the Lakewood Police Department, the Lakewood Fire Department, Lakewood Hatzolah, Department of Public Works, Chaveirim and the Lakewood Civilian Safety Watch.

Virtually all Lakewood schools were closed on Monday, though the kol Torah continued at Bais Medrash Govoah, the country’s largest yeshiva, into Monday afternoon, at which time all residents were encouraged to stay in their homes.

Monday night, in midst of the fury of Hurricane Sandy, Chaveirim of Lakewood brought light and power back to the Lakewood Police Department and Fire Department after the communications systems of both departments got knocked out at about 9 p.m.

Lakewood Chaveirim members could be found across Lakewood – including at Lake Terrace Hall, where they ensured that the Handler-Itzkowitz wedding could take place – during the height of the storm, assisting all local departments, including police, fire and Hatzolah.

Chaveirim members stepped in when the police and fire departments lost power to their communications systems. The volunteers and police officers busted open the repeater room at police headquarters after the key could not be found, and, with much diligence, creativity and perseverance, they got the repeater to work, restoring communications for the police and fire officials.

“It was a great sakanah to have these systems down,” an askan related. “These Chaveirim members are second to none. Without their work, we could have been stuck for days. We all can’t thank them enough.”

With tens of thousands of Lakewood residents remaining indoors, Mayor Miller and Committeeman Lichtenstein traversed the streets of the town to assess the damage and assist in the recovery effort, even raking leaves, unclogging drains, and lifting tree branches off of roadways themselves.

“We feel an achrayus to the community,” Mayor Miller told the Yated Tuesday evening. “It is my highest priority to get residents back on their feet and the town back up and running.”

Mayor Miller said that great appreciation is due to the emergency workers, dispatchers and other emergency personnel, not only in Lakewood, but across the state and the entire region, for their dedication.

Monday afternoon, thousands in Lakewood had lost electricity. By Monday night, approximately 20,000 Lakewood residents were without power. JCP&L, the utility company that services Lakewood, said that power might not be restored for days. As of Tuesday night, much of the town remained in the dark, though several weddings were being held, utilizing generators. One wedding was taking place at N’eemas Hachaim Hall at Bais Tova and another at Ateres Reva Hall.

On Monday night, despite the imminent arrival of the hurricane, a number of wedding were held in Brooklyn. Ateres Chynka, Ateres Chaya, Torah V’yirah and The Palace all hosted simchos, with generators at the ready in case of a power outage. A wedding at Ateres Avrohom Hall in Williamsburg was rescheduled for Thursday, while a simcha at The Continental proceeded, with the chupah time being moved forward, so that guests could return home at a bit earlier hour.

“The bracha we offer baalei simcha is that the chupah should be beshaah tovah umutzlachas,” remarked a guest at the Handler-Itzkowitz wedding Monday night at Lake Terrace Hall, where power was provided by generators with the help of local Chaveirim members. “Looking around at the dimly lit hall and taking it all in with the strains of Od Yishoma in the background gives the bracha a whole new meaning. Indeed, regardless of the somewhat compromised circumstances, we bless all baalei simcha with nachas and bracha.”

“We won’t let the storm dampen our mood,” added another guest. “This is a passing hurricane, but the simcha, we hope, will last a lot longer.”