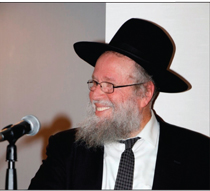 The Agudah Convention this past weekend was chock full of insights and lessons, delivered in dozens of speeches and drashos by rabbonim and talented orators.

Far be it from me to intimate that there was one lesson that stood out from the others, but there was, indeed, one particular insight that I, watching the convention remotely, thought was transformative. My hunch was validated when the one who shared it, Rav Elya Brudny, rosh yeshiva at the Mirrer Yeshiva in Brooklyn, himself suggested that the entire convention may have been worth the time and effort for this particular message.

Rav Brudny related that years ago, there was a bright bochur, a metzuyan, who, at age 19, abruptly left yeshiva and went to college to get a PhD. This young man, it turned out, experienced emotional challenges and led a difficult, even miserable, life.

After leaving the koslei hayeshiva, the boy lost his connection to learning, but he would track down Rav Brudny at a local bais medrash where the rosh yeshiva learned at night. The bochur would approach Rav Brudny and ask if they could learn together. Rav Brudny would indulge him, leaving his chavrusah to devote time to this young man.

Usually, at the end of their seder, the boy would raise all sorts of issues, including his gripes against the yeshiva system, rabbonim in general, roshei yeshivos, and other aspects of the frum world. Rav Brudny’s instinct was to stop his former talmid from saying these things. Indeed, Rav Brudny would often rebuke him, protesting his claims and making clear that he was denigrating talmidei chachomim and gedolim, and that he was making statements that were not grounded in emunah and Torah hashkafah. After being duly chastised, the boy would disappear for a number of weeks.

There were instances when Rav Brudny didn’t reproach the boy. On a certain level, at those times, Rav Brudny sensed that the boy felt that his rebbi was “open-minded” and perhaps even accepting of his claims. Rav Brudny was concerned that on those occasions, he was validating the boy’s words, which were lacking in emunah.

During this period, Rav Brudny traveled to Eretz Yisroel and visited Rav Elazar Menachem Man Shach zt”l in Bnei Brak. Because it was bein hazemanim, Rav Brudny had a unique opportunity to spend an extended period of time with the Ponovezher rosh yeshiva and ask him whatever shailos he had on his mind.

Rav Shach thought for a moment and then said, “Mir ken ah mentch altz zogen, we can tell a person anything, as long as it is beshuvah vonachas.”

Rav Shach was referring to a posuk in Sefer Yeshaya (30:15), which states, “Beshuvah vonachas tivoshei’un – With tranquility and restfulness shall you be saved.”

As long as one responds with tranquility and serenity, Rav Shach was saying, anything can be conveyed.

Rav Shach went on to relate several incredible stories about the Chofetz Chaim, who, with ingenuity and skill, was able to impart the most difficult messages effectively and without ruffling feathers.

Several minutes later, as Rav Brudny was getting ready to leave, he asked Rav Shach for a bracha.

“Can I at least have a bracha to be able to say the right things to people?” asked Rav Brudny.

“Nein,” said Rav Shach. “Mir darf dos kennen ton un ah bracha. No, one must know how to say the right thing without a bracha.”

Rav Shach didn’t elaborate, but Rav Brudny understood his message: This is your avodah – to learn how to talk to people. To measure what you can say and what you can’t say. And I won’t give you a bracha for that, because that’s your job, and for your job you need to work and put in effort.

Rav Brudny, concluding the story, remarked that the same ameilus, or effort, that one expends to understand a Tosafos or prepare a shiur must be devoted to understanding how to speak to people. Anyone who works with a tzibbur has to be ameil, working to master this. One must take inventory of his crowd and realize that to Yankel one can say one thing in a certain tone, whereas to Dovid it must be said in a different way.

“Learn your olam,” said Rav Brudny, “and learn it again, and then go with the hanacha (assumption) that you can tell anyone anything, but you must know how to say it, when to say it, and how to balance what’s said. But it is doable.”