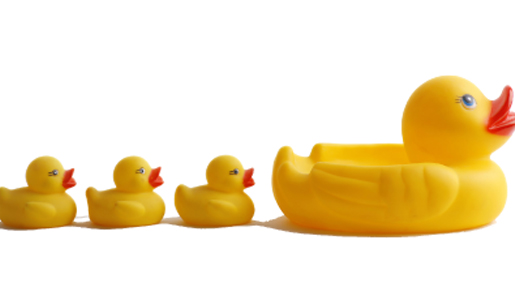 At the home of a friend, I once witnessed the following scene.

My friend’s four young children decided to play “school.” The eldest, a girl of eight, had a book of stickers that she planned to use to “teach” her “students.” It was a small class, consisting of a pair of younger brothers and a sister who was not yet three.

I watched as she led the way from the playroom to the dining room. Her siblings followed obediently, like ducklings in a row, on the assumption that she was leading them to their “classroom.” Instead, she began marching around and around the dining room table, with the others following behind in a state of mounting curiosity.

Round and round she went, and round and round they followed. Things like classrooms and lessons, not to mention stickers, seemed to have slipped the “principal’s” mind. On she marched, circling that big table with some determined if undefined purpose. And on her brothers and sister marched behind her.

Finally, one intrepid little boy spoke up. “Why are we doing this?” he asked.

The young principal didn’t answer. She just continued circling that dining room table – one more round, and then another for good measure. Only then did she lead her siblings away to the designated classroom, to be rewarded with a rudimentary education and, presumably, a few stickers for good behavior.

I was a fascinated witness throughout. It amazed me that those children had followed their big sister so blindly in her repeated circumnavigation of the table. Once or twice around, maybe. But the experience had been prolonged, and completely without explanation! She’d promised them a game of school, and then mysteriously led them on a seemingly pointless journey instead. And they, unbelievably, had followed. Why?

It was a clear, and almost frightening, example of Follow the Leader.

All of which got me thinking about what it means to be a leader.

And about what it means to be a follower.

It seems paradoxical. Anyone who’s ever raised a child, or taught a child, or been a child, knows that a youngster is, to one degree or another, wired to resist authority. Telling them, “Do this” is often tantamount to getting them to “do that” instead. This, in fact, is the basis of the time-honored parental method of reverse psychology.

So why did those children so docilely follow their older sister around and around that table? For that matter, what ever induces a person, young or fully-grown, to give up his independence in favor of obeying a leader?

I can think of a few reasons.

Sometimes, at the best times, we follow a leader because we share his ideals. Bending to his authority will, we fervently believe, bring out the best in us, and in society as a whole. As such, obedience is worth the loss of some independence.

Following a leader can be a means of joining a group. Never underestimate the power of belonging! Whether the group in question is a bunch of kids in a school playground or a sinister and brainwashing cult, by joining, the individual reaps the benefits of belonging to something larger than himself.

For one thing, it absolves the person in question from the responsibility of thinking for himself. Which brings us to the next, and less salubrious, reason for following leaders: mental laziness.

Making life choices is hard. There are many, many things to be decided on a daily basis in the complex world of ours. How blissful to simply allow someone else to make some of the decisions for us. What to wear, how to speak, where to live; the possibilities are endless. Once you’ve accepted someone else’s leadership, you’re off the hook. There’s no more need to make all those pesky decisions yourself. No need to think things through or to weigh the various factors. When the leader of the schoolyard has spoken, you know exactly what to do. When the queen of the class, or the block, issues an edict, going along means that you don’t have to figure things out for yourself. It also, as we’ve said, offers membership in whatever elite group is going. If you follow the leader, you’re in. You’re safe.

Then there are times when people follow a leader out of fear. In other words, they’re coerced into obedience. The Communists began with a utopian ideal that fired the imaginations of many idealistic men and women. But once they’d installed themselves in positions of power, they became the other kind of leader. Not the kind that inspires, but the kind that threatens – and carries out its threats. The kind of leader you’re afraid not to follow.

The Nazis, goose-stepping their vicious way across the map of Europe, may have started out inspired by an ideal, dubious as it was. But they quickly degenerated into the kind of robotic, “just obeying orders” followers that wreaked such havoc on the world and on our precious brethren.

Leaders have a number of tricks up their sleeve to ensure a stream of followers. First, they’re decisive. They know what they want and they’re not afraid to ask for it. That little girl who decided to play school with her younger siblings, was confident enough to declare herself the “principal” of the game and then to institute the Great March around the table that had them scurrying in her train. And she was astute enough to figure out another weapon in the good leader’s arsenal: a touch of pageantry.

On some level, she must have known that the mystery of the march would intrigue them, and lead them to subjugate themselves to what they perceived as her superior sense of how the game ought to be played. Their big sister would, they believed, eventually lead them to the ultimate goal: a fun time. For the sake of a bit of entertainment on a boring afternoon, they were more than willing to follow her mindlessly around that dining room table for a while.

Interestingly, even the one little brother who dared question the proceedings did so while continuing to follow in the leader’s wake. He dared not take the chance of missing out on what the others had. Like them, he longed to belong. And to that end, he was willing to temporarily put his independent mind on hold.

We encounter all sorts of leaders in our journey through life. Often, they’re good leaders. Our parents, teachers, rebbeim and roshei yeshiva are pious individuals devoted to our welfare. They will lead us in directions that will accrue to our benefit.

But there is many a would-be leader out there with more nefarious goals. He may wish to lead strictly for the power that leadership bestows. A good following is a balm to his ego, assuring him of his superiority. Others have intentions that are frankly evil. Such leaders don’t wear neon signs warning, “Danger – Keep Away!” But they should.

Mostly, we come up against our internal “leaders.” The voices of good and bad within ourselves.

The yeitzer tov leads us along positive, productive paths. It explains things in terms we can understand, if only we’re wise enough to listen with our minds instead of just our hearts.

Its opposite number, the yeitzer hora, is a very different story. He long ago learned the art of leading through misdirection. Though he may start out by captivating us with an ideal, he always ends by throwing us in a dank, dark prison cell, locking the door and pocketing the key.

It takes yiras Shomayim, experience and a certain amount of sturdy good sense to steer clear of the latter while heeding the advice of the former. It takes strength of character.

Perhaps the best way to make sure we’re on the right path is to follow the example of the youngster in our story. To speak up, even at the risk of incurring the leader’s wrath. To ask, “Why are we doing this?”

The answer to that question may tell us everything we need to know about whom we’re choosing to follow, and where that choice will lead us.