Feeling (Some) Aimas Hadin In The US Supreme Court 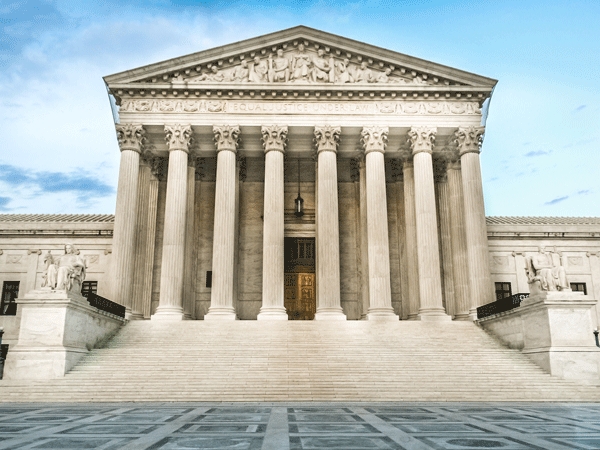 The summer before last, our family spent some time in Baltimore, MD, visiting family and enjoying the change of scenery. From Baltimore, we took some day trips to Washington, DC, our nation's capital. We visited various museums and places of interest, snapped pictures, and of course had our fair share of interesting experiences. (As an aside, almost all of the museums, buildings, monuments and sites in Washington are free to visit. With entrance fees to many attractions nowadays nearing all time highs, this is something readers may wish to keep in mind.)

One of the buildings we visited was the US Supreme Court. As anyone who has ever been there can attest, simply walking up the impressive stone steps and entering between the double row of massive columns imparts a feeling of awe and quiet reverence. From the noise and tumult of the busy streets outside, one finds himself suddenly in the hushed halls of justice.

It is brought down that many people would visit courthouses on the days preceding Rosh Hashanah to allow themselves to feel, in some tangible way, at least a modicum of the fear one would fear when he is on trial. We have no kings today, and it is nearly impossible for us to visualize the feeling of being completely at the mercy of another power where one wrong word or move can result in an “Off with his head!” which no one would ever dare question or challenge.

Even so, watching people in line even in traffic court should give us pause. Are we nearly as anxious to find ourselves in the good graces of the Judge on Judgment Day as we are when faced with two points and a large fine for a driving infraction? Are we as prepared for what we will say? Are we as contrite? As sorry we were ever careless as to commit the infraction in the first place?

That’s only traffic court. Imagine what people feel when facing charges carrying penalties in the millions that could spell their financial doom. What about jail time? Would we stop at anything to do our best to win our case, make any effort, accept any penitence?

The architect and designers of the building clearly had that in mind when they laid out the plans for the court. The building is massive, dwarfing the men who scurry about inside. That in itself gives one a feeling of smallness and humility. In addition, the decorum is strictly enforced by guards posted all about. This is a place where the course of people’s lives – sometimes the course of the nation itself – is decided upon, and one does not forget it.

Our visit took place during the court’s August recess, so we were given a presentation by a Supreme Court clerk inside the actual courtroom on many of the court’s functions. Visitors were brought inside the courtroom – some even with very young children in strollers – and the presentation began. One thing this writer noticed almost immediately was how even the very young seemed to feel the reverence of the place and sat subdued, without disturbing, throughout the presentation.

One of the items of note we gleaned during the presentation was just how few cases actually make it to a hearing at the Supreme Court. The court can receive around 10,000 certiorari petitions (requests for a hearing) a year. It might accept to hear arguments in about 75-80 of them. That’s a tiny percentage! One can only imagine the mind-frame of someone whose last legal hope is a hearing in the Supreme Court and how much resources, effort and hope would be put into receiving that hearing.

Do we invest nearly as much effort into ensuring that Hashem hears our pleas for a good year in the lead-up to, and during the actual tefillos, of Rosh Hashanah? Thankfully, we know that we are always granted a hearing by our Creator. How much effort and thought should be put into that amazing opportunity!

(As we know, Mordechai Shalom ben Rivkah Rubashkin’s request for a US Supreme Court review was not granted. Luckily, he knows, as all believing Jews do, that the true final hearing takes place up in Shomayim, rather than down here on earth. Still, we should take an example from the effort and hope put into being granted a hearing down here and use it to better our efforts for a hearing and positive outcome up where it counts.)

Another interesting aspect of the Supreme Court’s function is that the court never hears or conducts an actual trial. What this means is that evidence of guilt or innocence is never presented, argued or debated. All that is supposed to take place during trial in lower courts. The Supreme Court only takes the evidence already presented and accepted and decides if the legal ruling or rulings of the lower court is valid or sound. This, too, is an element of the high regard in which the Supreme Court holds itself. As the clerk explained to us, “We don’t deal with the trivialities or technicalities, or get into nitty-gritty factual arguments. Our job is to decide on the jurisprudence of a case after all the smaller, technical aspects have already been exhausted and taken care of for us.”

A fascinating aspect of the presentation was the brief description of the huge friezes – murals sculpted across virtually the entire circumference of the upper courtroom – given during the presentation. The friezes were designed to pay tribute to the early influences on the American justice system and to the even earlier influences to the notion of a fair hearing and justice in the world. One of the first items depicted is the Aseres Hadibros, the Ten Commandments given by Hashem to Moshe Rabbeinu.

This was a sobering reminder that even the most secular goy knows, recognizes and admits to a great extent that the basics of law, justice and fairness comes not from their own (often barbaric) origins, but from us, the Jewish People.

Would that we Yidden adequatelyappreciate the treasure trove of Heavenly wisdom that is our very own rather than seek it in outside broken wells of failed ideas.

On a more humorous note, the clerk was at one point showing us the various functions or symbolism of many seemingly inconsequential items around the room. Some small flower design actually represents the “flowering of justice,” a chair placed to one side is actually reserved solely for the president’s use should he ever decide to visit the courtroom (a rare occurrence nowadays), and certain benches have raised platforms in front of them so that reporters can write or draw sketches on them, since photography or any type of recording device is absolutely forbidden even in our modern times anywhere in the courtroom.

Everything – every chair, line, window, design or fixture – seemed to be accounted for or have a higher, more significant, meaning.

“What are those round, golden discs placed at various strategic places around the room?” queried an elderly gentleman in our group.

“Oh. Those,” smiled the clerk sheepishly, “are the air-conditioning vents.”

Outside the courtroom and down the hall, we passed a room wherein we saw stacks upon stacks of paper. We learned that from this room anyone can pick up a copy of any decision handed down by the Supreme Court. To my question as to whether one needs to put in any sort of request or be granted any clearance, I was told, “No. Everything is open and available. Why, is there any decision you would be interested in?”

Off the top of my head, I threw out the recent decision about ObamaCare. “Sure,” the woman replied. She walked away and returned within minutes, handing me a massive stack of papers.

“Vekosev vechosem – And it is written and signed,” came to mind. (From Unesaneh tokef.) The court case is real and the verdict is final, as concretized by the actual decision put immediately into print. When it comes to the Heavenly verdict, we are not privileged to read the decision. Still, I was able to visualize in a slightly more concrete way that there is a very real and very important decision that is handed down regarding our very lives each year. What will it say? Are we doing our best to emerge victorious from our hearing?

Stepping outside the Supreme Court building is like being hit with a sudden splash of cold water. The awe, the reverence, the innate, unshakeable feelings of respect and veneration dissolve into sudden nothingness outside in the mundane rush of passersby.

We found ourselves facing a group of aimless youth, sitting cross-legged on the ground, many with their mouths symbolically taped with duct tape. To my curious glance, the leader of the group explained that they were protesting a certain law. Their cause happened to be an honorable one, and I wished them success in their efforts. The leader responded with a fervent “Amen” and we parted amicably.

Just another exchange in this wild world of ours.

The feelings of sheer awe and deference of only moments before seemed to have vanished.

A last glance back, however, brought some of it back to mind. “Wow. Just look at the steps and those columns. Imagine going up and in there and knowing it was your fate being decided.” One shudders at the thought.

Aimas hadin, the fear of judgment. On Rosh Hashanah, we proclaim the kingship of our Benevolent King. As King, He decides on our fate each year. Luckily, our Judge is merciful and compassionate. He desires more than anything that we emerge victorious in judgment. Still, He created the world with justice, and if we wish to emerge from court having won a positive outcome, we must take these days and utilize our efforts to show our goodwill, our regret for past misdeeds, and our sincere and wholehearted acceptance to move toward a better future, very seriously.

In that way, we will emerge from our Supreme Court with supreme kindness.