Fears Grow Concerning The Next Coalition 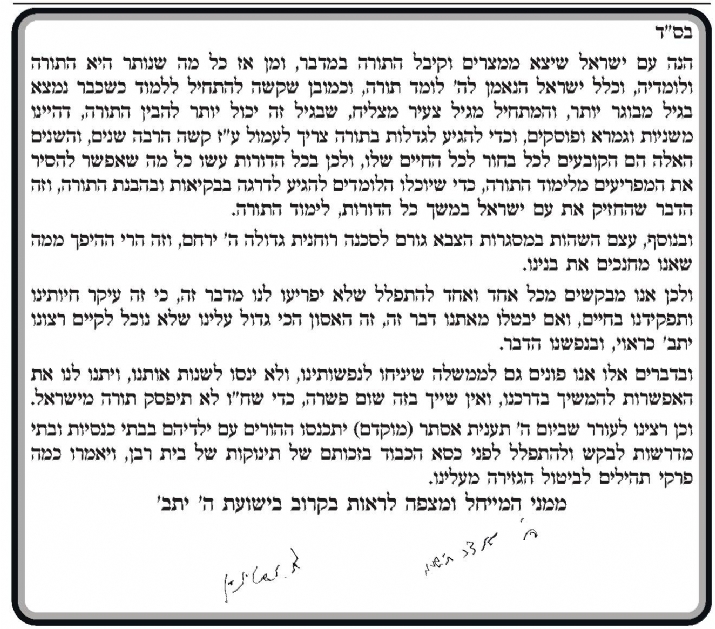 Netanyahu's attempts to form a coalition have not yet succeeded. Yair Lapid still maintains his position that almost every yeshiva student must do army service. His pact with Naftoli Bennet's Habayit Hayehudi party is preventing Netanyahu from creating a viable coalition, for the moment at least. Lapid is dangerous. Until now, he directed most of his fire and brimstone against the yeshiva system. But last week at the Presidents Conference meeting in Yerushalayim, he spoke of his desire to put an end to the dominance of Orthodox rabbis in Israel and to grant the Reform and Conservative movements equal government support.
“I want to do everything in my power to ensure the equality between all movements of Judaism in Israel, Orthodox, Conservative, or Reform,” he said. “In conversions, in budgets; in the eyes of the law… Small, old, petty politics cannot determine something that is eternal as is the Jewish identity, this is just wrong.”

He did not forget to add that the “complete dominance of Orthodox rabbis” over marriage “is an insult.”

Earlier, Lapid intimated that his intransigence is not only because of army issues but also a matter of principle.

“I do not even have a dilemma regarding entering a government with Shas,” he said. “If, on the day of the government’s swearing-in, I am photographed in the presidential residence with a Shas minister standing next to me, I will have ended my political career.”

Lapid has constantly emphasized that he will not be “a fifth wheel in a chareidi and far-right government.”

Yet despite Lapid’s anti-Orthodox and anti-rightist declamations, efforts to chisel him from Bennet’s rightist-religious party prove fruitless. This is despite the fact that 11 out of Bennet’s 12 party members are Religious Zionists and some are rabbis.

Last week, Netanyahu gave Bennet forty-eight hours to consider a proposal of being the first to join his coalition. He pried him with perks, including high-level government appointments for his party and influence in setting the government policies. Bennet’s party spurned the deal, with some members claiming it was a honeyed trap which Netanyahu wouldn’t honor. Netanyahu’s attempt last week to appease Lapid and Bennet with a more moderate enlistment proposal was rejected out of hand.

By Sunday, Netanyahu was furious at what he perceives as a Lapid-Bennet conspiracy to keep Shas and UTJ out of his coalition. He said that he wanted to establish as broad a coalition as possible in order to promote peace talks with the Palestinians.

“We need a broad government that on one hand will allow us to conduct and advance a significant process of negotiations and will not allow at any given time bringing down [the government] or cutting [negotiations] short. On the other hand, the government must be broad enough so that it will not be submissive and a hostage and be dragged into unnecessary concessions.”

Likud sources say that Netanyahu really wants to have chareidim in his coalition. They allege that Lapid’s and Bennett’s goal is to break the 36-year bond between Likud and the chareidi parties. Lapid envisions himself as a viable candidate for prime minister in subsequent elections. He wants to drive a wedge between the chareidim and Netanyahu so that next time around the chareidi parties will not recommend that the president picks Netanyahu to form the government.

“For a week, there have been no significant negotiations,” Bennet said on Monday, while

Lapid told colleagues at a party meeting, “This is a weekly conversation in which I tell you that I have nothing to tell you.”

On Monday, Rav Aharon Leib Shteinman publicized a letter emphasizing that the Torah community is even more determined to not compromise its values at any politician’s bidding.

“To reach Torah greatness a person needs to toil for many years,” he wrote, “and these years lay the foundation of every bochur’s whole life. Therefore, in every generation, people did everything possible to remove hindrances to Torah study so that learners should reach a proficient level in erudition and the understanding of Torah. Torah study, has been the mainstay of the Jewish people in all generations.”

“Furthermore,” he pointed out, “living in an army environment itself is a great spiritual danger, Hashem yeracheim, and the opposite of the chinuch we give our sons.”

Rav Aharon Leib demanded from the government “to leave us alone and not try to change us, and give us the opportunity of continuing our path.”

“There is no possibility of making any compromise in order that Torah should not, chas veshalom, be forgotten from Yisroel.”

Rav Aharon Leib called on Yidden to gather in shuls and botei medrash on Ta’anis Esther and daven and recite Tehillim for annulment of this decree in the zechus of tinokos shel beis rabon.

The Lapid-Bennet debacle leaves Netanyahu with unpleasant choices such as including the leftist Labor party in his coalition. News sources indicate that Netanyahu is considering forming a minority coalition of 57 MKs from Likud-Beiteinu, Shas, UTJ, Tzipi Livni, and Kadima, and then facing Bennett with a challenge: join my coalition without Lapid, or don’t join and force a new election that the Left might win. On Tuesday night, Tzipi Livni’s Hatnuah party was the first to enter into a coalition agreement with Netanyahu. Reports indicated that the negotiations with Shas and UTJ were reaching a critical stage, with the Likud appearing to compromise on the outstanding issues. At press time there was no clear or authoritative information available.

According to other reports, Netanyahu is willing to resort to the holding of new elections.

“Bennett should not pull the rope too much,” a senior source told the Maariv. “In the end it will snap. Netanyahu is ready to head for elections. The main thing is not to surrender to the pact between Bennett and Lapid. Netanyahu is unwilling to consider the possibility of leaving the chareidi parties out of the coalition. Bennett and Lapid should internalize this. Netanyahu will not bring Lapid into the coalition before he closes deals with all of his natural allies.”

“Netanyahu is threatening us with an empty pistol,” they said. “If elections are held today Likud will get 12 seats, because the public will punish him for failing to establish the most natural government, with us, which is what he should have done from the outset.”

There is another reason Netanyahu might get less votes in new elections – the trial of Avigdor Lieberman, second man on the Likud-Beiteinu list, which began Sunday in Yerushalayim. He is being tried on fraud and breach of trust charges, allegedly promoting a diplomat in return confidential documents about a police investigation into Lieberman’s financial affairs. Lieberman claims he discarded the information without reading it.

Lieberman pleaded innocence on Sunday, saying that he “acted properly within his authority and did not commit any criminal offense.” The next four court sessions are scheduled for April or May. Sadly for Lieberman, the prosecution’s main witness is former Deputy Foreign Minister Danny Ayalon who is furious at Lieberman for striking him from the party’s list just before elections. If found guilty, Lieberman can be barred from politics. Meanwhile, Netanyahu has reserved the post of Foreign Minister for him in the event that he’ll be cleared.

A negative Lieberman verdict would hurt Netanyahu’s popularity in the event of a new election.

Bennet may yet be induced to see the light. Meir Porush and Moshe Gafni of UTJ met with him to convince him to join them in a religious bloc, but the main point of contention, the enlistment issue, remained unresolved. Bennett was unmoved by UTJ politicians’ arguments.

Similarly, Bennet’s first meeting with Aryeh Deri of Shas since the elections also resulted in no concrete results.

The same happened with Bennett’s tour of Yerushalayim’s largest yeshivos. Bennett was invited to visit the Mir and Chevron Yeshivosto provide him with a front seat view of what the Torah world is all about. Although Bennett said afterwards that he had been “exposed to the power of the Torah world,” he still reiterated his refrain that while acknowledging that Torah is essential for Israel’s survival, “a large part of the nation has proved that Torah can be integrated with the army.”

However, there is light at the end of the tunnel. Some members of Bennet’s party are beginning to rebel, saying that his main goal should be to join the government with or without Lapid.

“After all the sides make their point, we must conduct coalition negotiations, before the Labor party or parts of it join [the coalition] and make Habayit Hayehudi irrelevant,” a Habayit Hayehudi MK said. “Habayit Hayehudi cannot remain outside the coalition. If that is where Bennett is leading us, he will have no support. It is reasonable to assume that he also understands that the goal is to receive the highest price to enter the government, and that this must be done now before it is too late.”

The Mafdal party, one of the four groups comprising Habayit Hayehudi, also expressed displeasure at Bennet’s pact with Lapid. One of its officials said, “The time has come for Bennett to decide whether he wants Lapid or a solid Netanyahu government where the religious and chareidi public influence the public character.”

On Tuesday, Rav Zalman Melamed, Rosh Yeshivaof the Beit El Yeshiva and a leading figure in Religious Zionism expressed opposition to any form of coerced enlistment.

“Any coercion in cutting down the number of Torah students or cutting their stipend will cause greater alienation of the chareidi public and widen the rifts in the nation, and contribute nothing to equality in bearing the burden of citizenship,” he said. “This must be opposed with great vigor. Everyone knows that the army does not need all the people it enlists every year and there is a lot of hidden unemployment in the military. For the army’s sake, the number of soldiers should be reduced and their quality and professionalism need to be increased. A wide scale civilian service or national service will also be an unnecessary burden on the state and will do more harm than good.”

Meanwhile, Hanin Zoabi, the Arab MK who participated in the 2010 flotilla from Turkey to Gaza, responded to calls that Arabs should  also be subject to compulsory enlistment or national service.

If such legislation is passed, she said, “We will announce that there is civil disobedience. You should start building the prisons, because our entire youth will prefer to sit in prison rather than serve.”

For the sake of Torah learning, we will do no less. With Livni joining the coalition, Bennet and Lapid may feel pressured to fall in line or be left out.