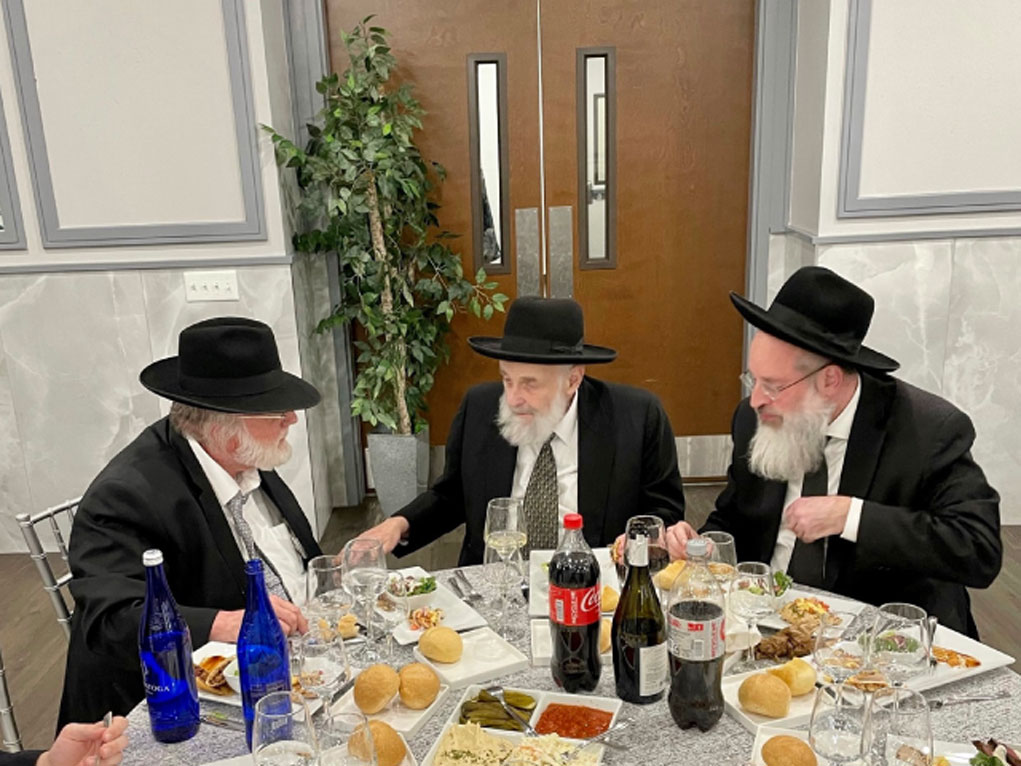 If you live in a town like Lakewood, it’s the kind of hall you find yourself in twice a week. There are 10 to 15 round tables, dotted with industry centerpieces (the flowers are generally fake and some shade of white and green), bowls of pickles and coleslaw, and flasks of cola. Some of the jugs have limes hanging precariously from their lips — that means it’s diet, of course.

Usually, at these affairs, there is a head table. If it’s a bar mitzvah, the guest of honor has been seated since 5:00, and when it’s a Sheva Brachos, it’s empty for a while longer (the couple is in the parking lot frantically messaging the organizers if it’s ok to come in yet).

Tonight’s event is a bit different, though. There is no head table and no single guest of honor. It’s all one family, and each person attending is an integral part of the celebration.

The Hirschmann family of Toronto have gathered to mark a milestone. Their venerated patriarch, the rosh kollel of Kollel Avreichim, Rav Yaakov Michoel Hirschmann and his rebbetzin, traveled in to celebrate together with their numerous offspring. Most of them, like many other families today, are based in Lakewood, and so the party was held here.

Together, the Hirschmanns have completed Seder Taharos through the family program dubbed as MAD, an acronym for a Mishnah a Day. MAD is an offshoot of THAD, or Two Halachos a
Day. A while back, a similar gathering celebrated the completion of Shulchan Aruch Orach Chaim.

It is an occasion worth publicizing, but it immediately becomes clear that the rosh kollel isn’t someone comfortable with publicity. For more than 50 years, Rav Hirschmann has been content to labor away from the front pages, making his mark on the Torah world within the four flourishing walls of halacha he has built in Toronto.

He also doesn’t see the idea of a family joined in limud haTorah as something extraordinary. There is no need, in the rov’s mind, for marketing campaigns, glossy pictorials, and 20,000 breathless words telling the inside story of how one man changed the world. Rav Hirschmann just wants people to know that it’s a good thing to do, and it’s pretty easy to do it.

“If other families would hear about it and begin something similar in a way that works for them, then I think writing about our program and our siyum has great value,” he says.

The rov starts our conversation with a memory and a disclaimer.

“I don’t know if the story I am about to tell you is true, but it inspired action, and that’s enough to give me the right to recount it. When the rosh yeshiva, Rav Aharon Kotler, was in the throes of his final illness, his dear friend, the Kapishnitzer Rebbe, was desperate for constant information on the rosh yeshiva’s condition. It was said then in yeshiva that the rebbe promised a chelek in Olam Haba to whomever would provide him with updates every three hours.”

“I can’t even say I feel bad that I was unaware of the offer in real time; I probably wouldn’t have done anything about it,” Rav Hirschmann laughs. “Young men at the age of 22 haven’t really begun to worry about Olam Haba yet. However, as I got a bit older, it would cross my mind every once in a while, and became an example of a missed opportunity. After all, a guaranteed chelek in Olam Haba isn’t something to sneeze at.”

The room is beginning to fill up and starting to buzz. He pauses for a moment to hug a grandchild and smile warmly at the next one waiting in line. Looking around, you can tell it’s a family that’s closeknit and, maybe more importantly, that values that closeness. It is becoming apparent why THAD and MAD works so well with the Hirschmanns. When you know the significance of connection and you have a leader who knows how to keep it strong, following through becomes a much simpler ask.

“It hit me a while ago that we have ongoing access to a different promise that guarantees the very same result,” Rav Hirschmann continued. “Chazal tell us that kol hashoneh halachos bechol yom muvtach lo shehu ben Olam Haba. Whoever learns halachos every day is guaranteed a portion in the world to come. Now, without lessening the power of a promise from the Kapishnitzer, if we have an opportunity to take advantage of an even more powerful promise, shouldn’t we take it? And so, THAD was born.”

If you are in this business, you have an instinct to search for the pull quote. Something sensational, the Shulchan Aruch that survived a fire, a shidduch that came from two men sharing their halacha, a long-lost relative uncovered in the viral siyum speech.

All my scenarios were prepared. So, it created a tremendous sense of achdus in the family, right? Probably, there was a child struggling, no? And you tried everything but there was no movement until you dedicated a week of the program to his hatzlocha, correct?

I got nowhere — Rabbi Hirschmann was just fine with the learning speaking for itself.

“The mishpocha learns Torah. That’s the whole thing. We were zoche to finish Shulchan Aruch Orach Chaim, and we began to supplement halacha with a mishnah a day in Taharos. Sometimes, a video is sent out with a thought on that day’s section to keep the oilam going, and every so often we make a siyum to remind each other what makes a Jewish family different.

“The value of what we are achieving doesn’t need something supernatural to make it clear. Every family needs to ensure that knowing more Torah is a central goal. With an ironclad commitment to few more minutes every day, every family can hold celebrations just like these.”

The point was clear, and striking in its simplicity. Every family yearns to stay connected. It’s a basic human need, and really, when properly utilized, family can and should be a vehicle of constant growth. Yet, sometimes, it seems impossible. This brother finds a job in one corner of the world and that sister settles in another. Sons move out and daughters move on. We become separated by the constraints of time, place, and space that are natural to growing up and finding our places in the world. Every family contends with it, eventually.

But as Jews, we have an inborn advantage to overcome physical displacement. We are already bound by the gift of Torah and our shared obligation to learn it. Utilizing that gift to bind families together in a quest to master the dvar Hashem should be a natural progression.

Lemishpechosam leveis avosam. We are a nation founded and built on the concept of the family unit. Each home has its portion; each household, its mission. And the only way to access it fully is to learn Torah. It’s that simple. Here was a room full of people, originally tied together by blood and now tied together by the pursuit of eternity, who all discovered a secret so basic that it’s not really a secret at all.

Every family needs a common goal to bind them together, and every Jew must know Shulchan Aruch Orach Chaim and Shisha Sidrei Mishnah. The Hirschmanns found the way to unite these two basic necessities and do it in a way that can, should, and must be replicated in Jewish homes around the world.

“It’s already happening,” Rav Hirschmann tells me with satisfaction. “There are families in Toronto who have been inspired and learned Orach Chaim cover to cover, others who have gone through mishnayos. Every person who instituted this in their home has grown tremendously from it.”

The rov isn’t seeking publicity for the Hirschmann family accomplishments, and he has no appetite for an international program or a football stadium siyum with a dais on the turf. This is inhouse, the quiet quality of Jewish families living right. It’s about every mishpocha in Klal Yisroel finding a way to make a shared commitment in their extended four walls to growing in yedias haTorah.

There is a Torah to be learned, and we all can do a little bit more to learn it.