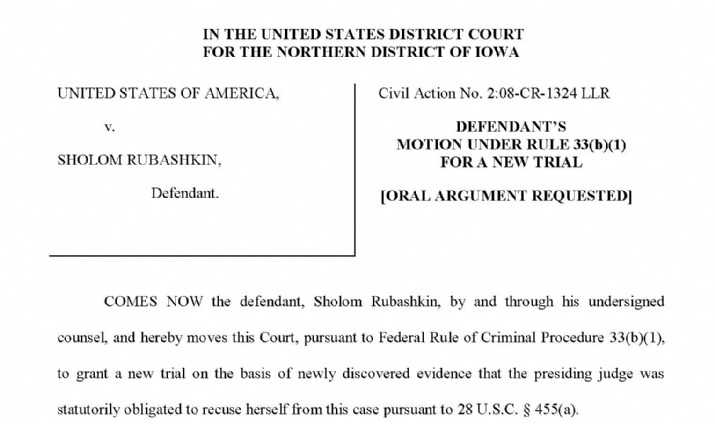 Judge Reade has previously disclosed in writing that she engaged in so-called limited “logistical cooperation” with law-enforcement authorities but only to ensure that attorneys and interpreters would be available for the almost 400 aliens and other workers arrested in Postville, Iowa and then processed in nearby Waterloo.

But copies of Department of Justice emails, memos and Blackberry messages in their totality paint a different picture, one of a Judge who was consulted and the over-all raid was arranged to meet her specifications and even her travel plans. Attorneys have stated, had they known about her involvement in the investigation, arrest and prosecution, they would have demanded her recusal from the outset.

Operation CJV–Cedar Valley Junction, as it was dubbed by Minnesota and Iowa agents of Immigration and Customs Enforcement (ICE)–involved weekly interagency meetings as far back as fall 2007. Judge Reade was involved or briefed on the progress of those meetings, and in many cases, the documents reveal.

For example, an October 20, 2007 ICE internal summary states that “On October 29, 2007, the case agent and the co-case agent met with the USAO [United States Attorney’s Office] for a scheduled weekly meeting. The USAO was presented the information regarding a possible enforcement action for the week May 11, 2008. The USAO did not appear to have any issues with this date and discuss the dates with the Chief US District Court [Linda Reade] to see if that meets her scheduling needs.”

Another ICE internal memo dated January 28, 2008 reports in-depth on the coming raid and preparations to discuss “prosecution charges, and the scheduled meeting with the U.S. District Court Judge.” That memo continues to specify the role the Judge played and concluded the Judge is “willing to support the operation in any way possible.” The memo specifies, “At 1:30 local time, a meeting was held with the Chief District Judge. There were many attendees at the meeting as requested by the Judge. The attendees included the Judge, the clerk of court, USMS [United States Marshals Service], Probation, USAO, and ICE. The Judge was updated on the progress with the Cattle Congress [temporary facilities for a detention and processing center for the many anticipated arrestees] as well as discussions about numbers, potential trials, IT issues for the court, and logistics. The court made it clear that they are willing to support the operation in any way possible, to include staffing and scheduling.”

The January 29, 2008 memo continues and concludes the Judge is “very supportive.” It states, “The U.S. District Court Judge asked that one concern be relayed to ICE HQ. She has asked that ICE/GSA enter into a contract with the Cattle Congress as soon as possible so that she can continue to hold the court’s schedule for that time frame. Again, she was very supportive of operating at an offsite location but just wants to make sure we get it locked in as soon as possible.”

Another ICE internal memo, dated March 17, 2008, reveals that the Judge continued to give “full support” to the operation. Moreover, she wanted to schedule further action in accordance with her own vacation plans. The March 17, 2008 ICE memo, written long before the raid and any prosecution, states, “The USAO also stated that they have briefed Chief United States District Court Judge Linda Reade regarding the ongoing investigation and their expectation that it is anticipated to result in several hundred criminal arrests and subsequent criminal prosecutions within the judicial boundaries of the Northern District of Iowa. Judge Reade indicated full support for the initiative, but pointed out that significant planning and preparation will be required to allow the Court to clear docket time, request additional Judges, Court Reporters, Court Certified Interpreters, support staff, and facilities to conduct Judicial proceedings. It was pointed out that the judicial calendar is prepared many months in advance and as such the enforcement phase of this investigation should be planned for the spring of 2008. Judge Reade further advised that she would be out of the country and unavailable for all of February and half of March 2008.”

On March 17, 2008, an ICE internal memo reveals, Judge Reade was involved with the smallest details of the forthcoming raid, including concern over the cleanliness of the employees when they would they appear before her. The March 17, 2008 memo states, “On March 17, 2008, RAC Cedar Rapids met with the USAO, U.S. Probation, the USMS, and the United States District Court staff to include the U.S. Magistrate Judge and U.S. Chief District Court Judge. The parties discussed an overview of charging strategies, numbers of anticipated arrests and prosecutions, logistics, the movement of detainees, and other issues related to the CVJ (Operation Cedar Valley Junction) investigation and operation. The Chief District Court Judge requested that ICE and/or USMS ensures that the detainees take showers and are wearing clothing that is not contaminated when appearing in court. The next meeting with the Court will be set for the first week of April.”

Emails between ICE officials and prosecutors continue the saga of the judge’s continuous role. A February 14, 2008 DOJ interagency email subject lined “Agriprocessors” complains that the date of the raid is out of their control, it is being directed by the Judge. “The date for the operation was set by the availability of the courts, not by ICE and is the first dates that the District Courts could go. Because we anticipate a very high percentage of the arrests going criminal, the Chief District Court Judge requested we coordinate with her court. The Chief District Court Judge has cleared the court calendars, including moving trials and clearing the calendars for 3 other District Judges and 2 Magistrate’s court schedules in order to go May 7th. While we can move the operation a day or two forward or back, we do not have the ability to move it any further due to the court schedules. …Changing it now would be virtually impossible.”

Days later, a March 31 DOJ interagency email subject lined, “Cedar Valley Junction Update” states, “There was a meeting today with ICE, USMS, ODAG and USAO for the Northern District of IOWA regarding the Agriprocessors operation. ICE was represented by OI, DRO and OPLA. The first Assistant for the Northern District Rich Murphy indicated that he has a meeting this Friday (April 4) with the Chief Judge who has requested a briefing on how the operation will be conducted. Murphy has requested an operation plan from ICE by COB Wednesday so that he can incorporate it into his presentation.”

An April 02 Blackberry and email exchange between DOJ officials asks, “What is the status of our Op plan? Where are we on the doc for the USAO fro [sic] his presentation to the judge?”

The emails, memos and other documents are part of hundreds of pages of government and other court documents obtained.

Legal experts say that recusal standards demand that a judge must disqualify himself or herself “in any proceeding in which his impartiality might reasonably be questioned,” and goes on to assert, “what matters is not the reality of bias or prejudice but its appearance.” Moreover, the legal standards and case law do not require an average person to be “convinced” of a conflict, but merely “harbor doubts about the judge’s impartiality.” Rubashkin’s attorneys have quoted these standards and case law decisions in their demand for a new trial and the recusal of the judge.

At a July 24, 2008 House Judiciary Subcommittee Hearing examining details of the unusual mass raid, subcommittee chairwoman Zoe Lofgren (D-Cal) asked Deborah J. Rhodes, a Senior Associate Deputy Attorney General who had been sent to testify in place of the United States Attorney, “what information was provided by the Department of Justice, Department of Labor, Department of Homeland Security–any or all of them–to the Federal court in Iowa.  This was planned for a long time. When was the connection made with the court, and what measures were taken to ensure that the court’s view of the cases would not be affected and that judicial neutrality would not be compromised?”

Associate Deputy Attorney General replied in vague terms that the judge was merely given a “head’s up.” She testified, “My understanding — primarily for logistical reasons. That is not unusual. If there is going to be an enforcement operation that is going to bring a large number of cases to the court, it is not uncommon to give the court a head’s up on that.” Rep Lofgren replied, “So Judge Reade would have been contacted in advance? I am not making a value judgment; I am just trying to find out what happened.” Rhodes answered, “That is correct,” but gave no further details of the Judge’s continuous oversight of the operation.

Nor did Judge Reade disclose in December, 2008 to Rubashkin’s attorney, during a scheduling telephone exchange about the possibility of a recusal motion, of her long-term involvement. Instead, she simply set a deadline for filing the motion. According to the American Bar Association Model Code of Judicial Conduct, Rule 2.11, her continued silence violated her obligation to “disclose on the record information that the judge believes the parties or their lawyers might reasonably consider relevant to a possible motion for disqualification.” Rubashkin’s attorneys have argued this very point in their motion last week.

Edwin Black is the author of IBM and the Holocaust and the forthcoming book The Farhud: The Arab-Nazi Alliance in the Holocaust