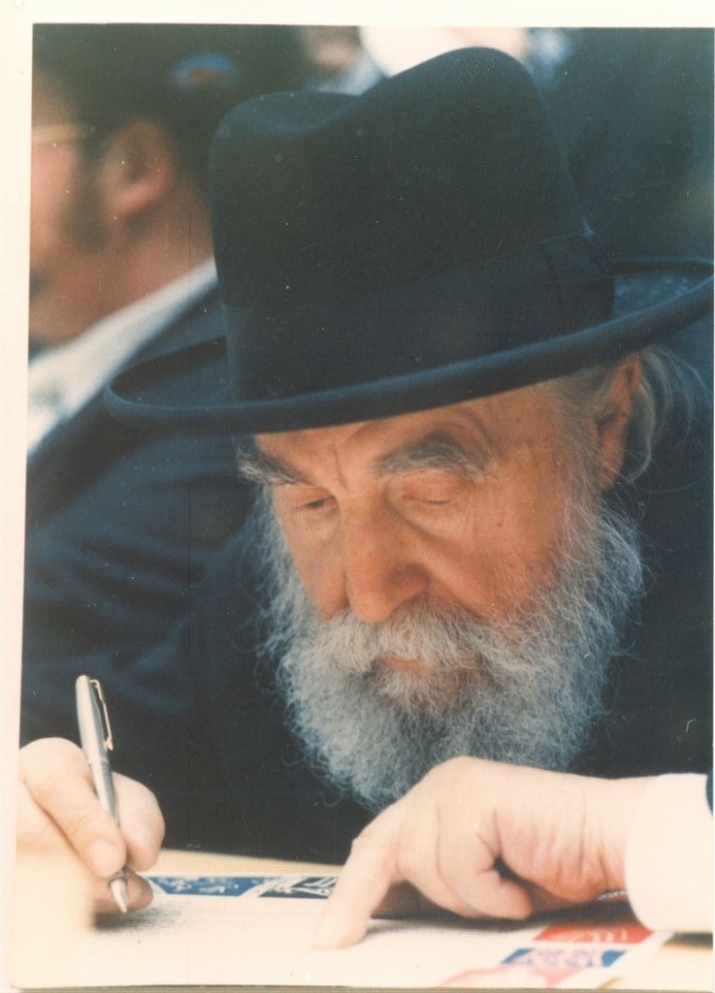 The Kav Hayoshor offers important guidance for when a person doesn’t have the ability or focus to engage in Torah study. “In Eruvin 28 we find that when Rav Zeira was too exhausted to learn, he would sit at the door to Rav Yehudah bar Ami’s yeshiva. Whenever a scholar would pass by, he would stand. ‘That way I will get rewarded for performing this easy mitzvah,’ he reasoned.

“I have received a kabbolah from anshei ma’aseh that this Gemara teaches us how to comport ourselves. If one is unable to do a mitzvah, he should do something positive that is easy for him. For example, he can at least touch his tzitzis tassels and gaze at them. Although this is not difficult, looking and thinking about one’s tzitzis is a great inyan. Doing so raises up the Shechinah from exile. It brings us to focus on Hashem and bring G-dliness into the world. Those knowledgeable in Kabbolah know to contemplate one great Divine Name which has the numerical value of the word ayin, eye. Through doing this – contemplating the Sheim if one is on the level or at least yearning to do so and purifying our eyes by gazing at our tzitzis, one merits to fulfill the deep meaning of techeiles even in this world.”

Rav Nosson of Breslov explains further: “In the Zohar we find that the word techeiles comes from lechalos, which means to destroy and also to be completely consumed with desire. This teaches an important lesson. We see that looking at one’s tzitzis with genuine yearning destroys all accusing angels and impurity” (Kav Hayoshor, Shabbos;Likutei Halachos, Hilchos Tzitzis).

Rav Avrohom Grodzinsky was once asked a fascinating question. “The Zohar makes several allusions to dates when the redemption will arrive. All of them have passed. How are we to understand these dates in light of the obvious fact that we are still in exile?”

“Know,” he responded, “that there are actually three fairly modern dates offered in the Zohar. Each date alludes to the redemption on a different level of the three upper worlds. But the date of the redemption of the lower material world of action hasn’t yet arrived. We are all waiting for this final redemption to bring Moshiach and actualize the geulah. This is why some tzaddikim claimed that Moshaich had come. They were on the level of a higher world which was already redeemed.”

The Imrei Noam explains how a statement on Eruvin 29 alludes to these four redemptions symbolized by the four cups we are obligated to drink on the leil haSeder. “On Eruvin 29, we find that any wine that is not one part water to every three parts wine is not wine. On a deeper level, this alludes to the mitzvah to drink four cups on Pesach. The first three cups allude to the three avos, and the final cup symbolizes Dovid and the fourth foot of the Kisei Hakavod. This is why we fill the Kos Shel Eliyahu before filling the fourth cup: Eliyahu Hanovi will arrive before MoshiachbenDovid. This explains the reason we say ‘Shefoch chamoscha al hagoyim.’ After Eliyahu Hanovi arrives, Hashem will punish the nations. Interestingly, the word chamoscha is begematria ‘Kos Shel Eliyahu.’ This teaches that when we open the door after pouring the Kos Shel Eliyahu, the neshamah of Eliyahu is revealed. This is a special time to lower those who hate us and seek our destruction” (Imrei Noam, Haggadah Shel Pesach).

Eruvin 30: The Nature of Mazon

Although we find in the Mishnah in Maseches Brachos that borei minei mezonos discharges any food but water or salt, this is not as simple as many assume. After a discussion of the reasons that mezonos may not discharge all foods, the Nishmas Adam rules that mezonos can discharge all foods. It seems clear that all foods but water and salt are called mazon from a statement on Eruvin 30, where we find that if one vows not to partake of mazon, he can eat nothing but water and salt. Clearly, anything else is considered mazon even if the proper bracha on what he wishes to consume is shehakol.

Rav Moshe Feinstein rules this way as well, but adds an important dimension. “Although the halacha follows the Nishmas Adam in this matter, one should still not rely on this any more than necessary. So, if one inadvertently makes amezonos on a food on which one should have recited another bracha, he should eat only a minuscule amount. He should then wait until he goes into another domain or something else happens that would require another bracha. He then makes the proper bracha and eats according to all authorities” (Nishmas Adam, 58:3; Igros Moshe, Orach Chaim, Part IV, #40).

Eruvin 31: The Pleasure of Mitzvos

The Rebbe of Strikov recounted that Reb Dovid Kaplan, a brilliant Strikover chossid, was once asked by the Chassidim, “Why do our sages say in Eruvin 31 and elsewhere that mitzvos lav lehenos nitnu, mitzvos were not given for pleasure? Certainly we enjoy them!”

Reb Dovid replied with a parable. “Once there was a very wealthy man who worked hard until the evening. When he returned home, his delectable dinner was waiting for him. As he entered his house, one manservant took off his coat. A third pushed his comfortable chair into the optimal position so that the wealthy man could enjoy its plush upholstery near the table. As the wealthy man sat down, a waiter brought in the first course of his perfect dinner. The soup was perfect, made of expensive ingredients by his gourmet chef. The wealthy man let out a sigh of satisfaction and began to partake of the soup, enjoying every spoonful. He was completely absorbed in his soup when yet another servant rushed in with an important telegram. It bore wonderful news. He had just earned forty thousand rubles, a fantastic fortune, which made the wealthy man feel overjoyed. It was the perfect ending to his tiring day.

“Nu, so do you think this wealthy man can still focus on the soup? Of course not! He no longer cares for the delectable morsels. His mind is on a much greater source of pleasure.

“The same is true for one who does mitzvos. Of course they give him pleasure and satisfaction in this world. But when he realizes the unimagined reward that every mitzvah generates, he will understand that what he feels is nothing compared to the bliss that he will enjoy in the ultimate future!” (Marbitzei Torah Mei’olam Hachassidus,Part I, p. 258).

Eruvin 32: A Matter of Priorities

Rav Efraim Weinberger recounted, “I was the rov in a certain neighborhood where the shul was housed in a small building. We desperately needed a mikvah, but had nowhere to build one, except in our own small building. If we desired, we could build another floor over the shul, move the shul to the second floor, and put in a mikvah where the shul had been. I was unsure if we should do so, since it is forbidden to make what was once a shul into a bathhouse or mikvah, as we find in Shulchan Aruch. On the other hand, we really needed a mikvah.

Shortly after this, I met the Chazon Ish at a bris and presented my quandary to him. He ruled that we should definitely build and move the shul, putting a mikvah where the shul had been.

“We find in Eruvin 32 that in Rebbi’s opinion, it is better for a chover, a talmid chochom, to commit a small sin so as to avoid an ignoramus committing a grave violation. From Tosafos in Maseches Shabbos 4, it appears that the halacha follows Rebbi in this matter. Better for you to violate a halacha in the Shulchan Aruch than for people to violate issurei kares if there is no local mikvah.”

The Chazon Ish concurred. “The Ohr Hameir ruled well. Make the mikvah only in the area that the shul was in. You should place a mechitzah where the aron hakodesh was” (Pe’er Hador, Part II, p. 158).

A certain man wished very much to extend his techum for the first days of Yom Tov on Sukkos. As he was building his sukkah, he wondered if it was even permissible to do so. After all, as we find on Eruvin 33, an eruv is only valid if it can be eaten where it is. For example, if he leaves the bread high enough on a tree and it is forbidden al pi halacha to remove it, the eruv is invalid. Since one must eat only in a sukkah on Sukkos, perhaps one cannot make an eruv techumim with bread to extend his techum. After all, why is this any different than putting the bread where it is inaccessible and cannot be eaten where it is located?

When the man asked the Binyan Tzion if he was correct, he was glad to hear that he had erred. “You can definitely make an eruv techumin with bread on Sukkos. Although you are obligated to eat in a sukkah, that doesn’t mean that the eruv is inedible to you. After all, the halacha is that those who travel are not obligated in the mitzvah of sukkah. When a person walks two thousand amos, he is clearly in this category and can eat the eruv if he wants to” (Shu”t Binyan Tzion Hachadashos, siman 53).

A certain person found his friend’s property on Shabbos. The object was muktzah and he wondered if he was permitted to carry it on Shabbos in order to return it. After all, as we find on this daf, there are times when Chazal did not forbid violating certain rabbinic prohibitions. Perhaps the same held true here.

When this question was presented to the Chasam Sofer, he ruled that it was indeed forbidden. “This is exactly the same issue as the question of whether one is permitted to carry chometz on Yom Tov in order to burn it. Although the Maharam holds that it is forbidden only because when one carries the chometz, he is not fulfilling a mitzvah, we do not hold this way. The halacha is that this is forbidden only because carrying chometz on the Yom Tov of Pesach violates the rabbinic prohibition to carry muktzah. One therefore covers the chometz until after Yom Tov and then disposes of it.

“Clearly, one may not carry muktzah even though doing so would fulfill the positive commandment to return a lost object” (Shu”t Chasam Sofer, Orach Chaim,siman 82).