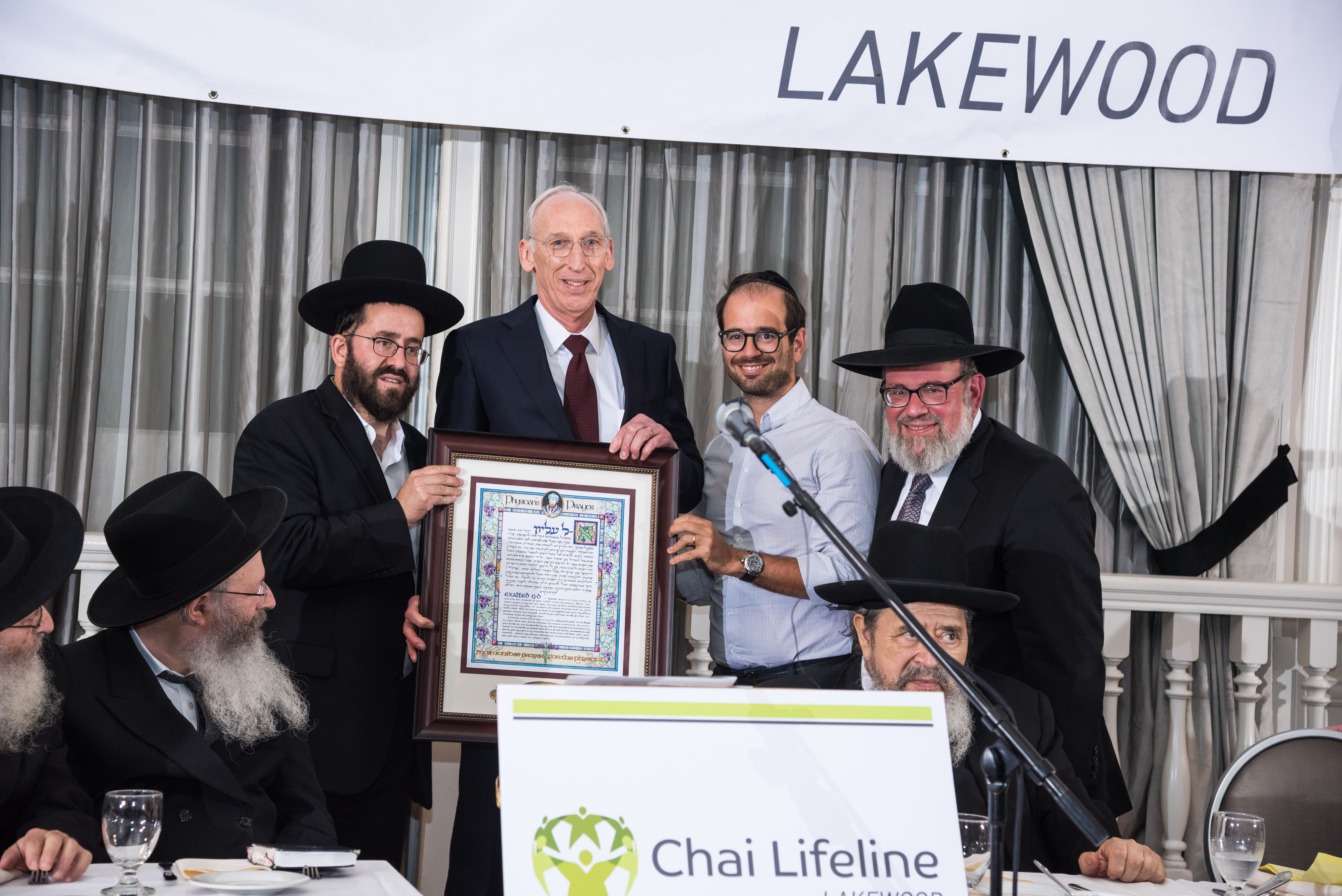 “Someone asked me, ‘What does Chai Lifeline do for you?’ I answered, ‘What do your father and mother do for you?’ You can’t encapsulate the answer to that question in one sentence. I, too, can’t describe what they do…because they do everything!”

Those were the words of Rav Shmuel Hirth, father of Malky Hirth a”h, who passed away earlier this year at the age of seven after battling cancer for five years.

In that short comment, Rav Hirth, rosh yeshiva of Yeshiva Nefesh Hachaim of Lakewood, expressed what every family serviced by Chai Lifeline knows. Chai Lifeline enables families of children plagued by serious illness to function. Without Chai Lifeline, families would be lost. Only a family that has unfortunately had to avail themselves of the services of Chai Lifeline can truly comprehend what the organization does.

Rav Hirth’s remarks were just one highlight of a deeply inspirational evening last week, as Chai Lifeline held its annual Lakewood dinner at Ateres Chana Hall. A massive crowd of thousands of men and women flocked to the hall to participate in the event.

There was not a dry eye in the audience during a special tribute video in memory of Yosef Sholom Feldheim a”h and Malky Hirth a”h, two children who passed away this year after battling leukemia.

“I was sitting at a table together with several other men,” one participant said, “and as the video ended, most of them were reaching into their pockets for a tissue to wipe away the tears that had formed in their eyes.”

The video depicted both the beauty and the grandeur of Yosef Sholom and Malky and their families, while simultaneously portraying how Chai Lifeline empowered these children and their families to have as normal a life as possible under the circumstances.

“What Does Chai Lifeline Not Do?”

The evening opened with remarks from the emcee, Rabbi Yitzchok Hisiger, editor at Yated Ne’eman.

“Take a second,” Rabbi Hisiger added, “and think about how many people in your life you would feel comfortable calling at literally any hour of any day for help or chizuk. Your parents? Your siblings? Some close friends? The list is very short. For thousands of people, Chai Lifeline is their list.”

Rabbi Hisiger then introduced Rav Aryeh Malkiel Kotler, rosh yeshiva of Bais Medrash Govoah. Rav Kotler pointed out that as important as the comprehensive services for sick children and their families that Chai Lifeline provides is the way the organization provides them. Chai Lifeline’s staff members are totally devoted and totally selfless. They exist for one reason only: for their mission of making life easier for patients and their families.

Rabbi Simcha Scholar, executive vice president of Chai Lifeline and its visionary founder, used the metaphor of a candle in a desert to describe what Chai Lifeline does for the more than five thousand families it services worldwide. He explained, “No one can describe the story and impact of Chai Lifeline better than the parents themselves.” He then introduced the moving video tribute to Yosef Sholom Feldheim and Malky Hirth.

Rabbi Shaya Feldheim, father of Yosef Sholom a”h, eloquently outlined how Chai Lifeline was there for his family from the outset.

“As soon as we got the tentative initial diagnosis, we were given the number of Chai Lifeline’s Naami (Stavsky) Gorelick, and even though she was in Monsey at the time, she dropped everything and ran to be with us. Within a few hours, she was with us at CHOP, calming and helping us.”

Rabbi Feldheim explained that despite his illness, Yosef Sholom succeeded in living his life with such simcha because Chai Lifeline, with their devoted volunteers, created an upbeat environment that enabled him to lead his life in the best possible way.

Similarly, Rabbi Shmuel Hirth related how Chai Lifeline was there for his family on all fronts. Whether it was advocacy with the doctors and other medical staff or on the home front, doing homework with the children, learning Mishnayos, and serving as a big sisters, Rabbi Hirth said, “We feel such hakoras hatov to Chai Lifeline. They really know what a person needs. They understand you. To understand someone, you have to love them. They loved us and we loved them.”

Preserving Normalcy in an Abnormal Situation

Rabbi Sruly Fried, director of Chai Lifeline New Jersey, set the tone for the evening as he echoed Rabbi Hirth and Rabbi Feldheim by eloquently describing the ultimate goal of Chai Lifeline. Rabbi Fried explained, “Rabbi Hirth said that he felt that he was living with a tzaddik, and it’s true. Both Malky and Yosef Sholom were tzaddikim. Their unrelenting emunah in the face of unbearable pain, their refusal to allow their spirits to die even as their bodies gave out, were a source of chizuk to all of us and will accompany me for the rest of my life.

“But at the end of the day, Yosef Sholom and Malky were children. You could see it on the video: the laughter, the playing, the pure love in their hearts. They were able to be children even when they were bald and in pain because they had very special mothers and fathers. Rabbi and Mrs. Hirth and Rabbi and Mrs. Feldheim created an environment that allowed Yosef Sholom, Malky and their siblings to be kids. Was it the same childhood they would have had without this nisayon? No. But when Yosef Sholom’s and Malky’s siblings look back, they will remember that their parents were there for them and that they had the best possible childhoods despite tragedy and illness.”

With great passion, Rabbi Fried concluded, “That is the mission of Chai Lifeline. Our goal is to empower mothers to be mothers to their children, to take care of their needs, to surround them with love and stability. It’s to allow fathers to be fathers, to go off to yeshiva, to be teachers and role models, to give each family everything it needs to function as a complete family even when illness threatens to tear them apart.”

“We Appreciate Chai Lifeline as Much as Our Patients Do”

In his beautiful remarks, Dr. Balis pointed out what an honor it was to come to Lakewood and be associated with the community and Chai Lifeline.

“One of the other ways I have been very rewarded as an oncologist is the relationship we develop with families,” he said. “We see families quite frequently, and as a result, we become close friends. What I have noticed is that despite our differences – cultural, political or religious – we develop a special bond in sync with the overall mission of curing children.

“Finally, I want to address the wonderful organization that is Chai Lifeline. As any of you who have gone through the process know, cancer treatment involves so many disciplines – surgery, medicine, pharmaceutical treatments, and more. Chai Lifeline is a pivotal part of multi-disciplinary care and plays as important a role as any of the rest of us do in taking care of patients. By supporting families with diagnoses and helping them cope with stress, they provide lifesaving services for children.

“As doctors, we appreciate that the service we provide for these families is supported, and we are therefore able to devote our time to our mission, making sure that families get the optimum chance for curing the disease.”

Dr. Balis concluded with a profound insight from the medical perspective: “As doctors, we appreciate Chai Lifeline as much as our patients do.”