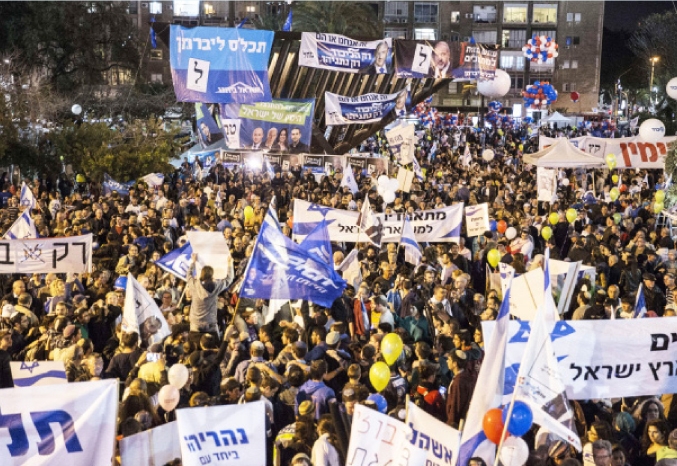 Following the last election, politicians schooled in public relations and armed with glib slogans and code words set into motion changes that they hoped would destroy the Torah way of life in Israel. The Religious-Zionist Naftoli Bennett joined with the rabidly anti-chareidi Yair Lapid, and in order to remain prime minister, Binyomin Netanyahu formed his government with them and agreed to promote their agenda.

They cloaked their program against Torah in innocuous phrases, such as “shivyon banetel,” as if they were really seeking to correct some inherent social imbalance. They created the impression that they care about the chareidim and that the campaign was aimed at improving their economic welfare.

They claimed that the army was in desperate need of manpower to fight regional battles and that without drafting yeshiva bochurim, the army would be in danger of weakening. In actuality, what they wanted to achieve had nothing to do with the army. They merely hitched a ride on a convenient emotional wave. Many got swept up in the hype and joined the bandwagon against frum Yidden.

They sought to force kollel people into poverty, contract yeshivos by shrinking their budgets, and change the face of the Israeli rabbinate by introducing a liberal chief rabbi and scores of like-minded rabbis and dayonim all across the country.

They tried to do away with conversion standards, with Shabbos laws, with kashrus laws, with gittin, kiddushin and traditional marriage, and with traditional religious customs honored since the founding of the state. They tried to reduce the role of Torah and halachah with thousands of cuts and slices. Their religious enablers cheered them on for the momentary glory and reward.

Under the guise of “ahavat Yisrael,” they promoted candidates for rabbinic positions who promised to erode halachic standards, as they mocked standard-bearers and famed rabbonim who have spent decades immersed in Torah. We are shrill baalei machlokes, they claimed, while they are men of peace, progress and conciliation. We are divisive haters and demonizers, they accused, while they are progressive purveyors of optimism and hope.

Terrible battles erupted with regularity. The coalition reveled in the image bestowed upon them by a deferential media – a media of open-minded progressives – while the traditionalists, they said, are out-of-touch extremists. They very effectively marginalized us and corralled us into a corner, where we could do little more than shout.

Binyomin Netanyahu, Yair Lapid and their underlings and partners achieved success based on their rhetorical abilities. Their enablers uttered lies and half-truths, ensnaring audiences of the uneducated and unknowing, as well those who seek to curtail our growth, glibly fictionalizing their intentions by using code words and stale propaganda. Fame and power coupled with old hatred is a lethal combination, and it currently appears to be gaining traction.

The evil ones see the growth of the Torah community and fear that it will take them over. For a time, it seemed that they were gaining. Many heroic people rose up, acting to fill the gaps they caused and enabling yeshivos and kollelim to remain open even after their budgets were cut terribly.

Providentially, the law drafting all yeshiva bochurim to the army does not go into full effect until 2017. It calls for jail time for those who fail to join the army, as well as financial fines for the yeshivos they attend. A definite condition of any frum party joining any coalition will be to repeal that law. Netanyahu, in the days leading up to the election, promised to overturn the law.

The law was approved a year ago, in March 2014, by a vote of 65 to 1. All opposition parties abstained from the vote and only Bayit Yehudi MK Yoni Chetboun voted against. He was severely punished by his party for his act of betrayal and ran in this election as the number-two man in Yishai’s Yachad party. His colleague in the Religious-Zionist party, MK Ayelet Shaked, who headed the Knesset committee that prepared the draft bill, said at the time, “This is a historic, important bill. For 65 years, there was an exemption for all yeshiva students, and the change the coalition made is proportionate and gradual and correct.”

On that day, Yair Lapid, champion of the anti-chareidi legislation, said, “To the 543,458 citizens of Israel who voted for Yesh Atid: Today we brought you equality in the burden of service.”

His religious colleague, Education Minister Shai Piron, said then that military and civilian service is “a symbol of our togetherness, of nationalism, of Zionism. Avoiding them is separating from Israeli society. Many young people associate strict Judaism with not fulfilling public responsibilities, which leads to alienation from our roots and traditions. This is an invitation for a dialogue on Torah and work, on army and yeshiva, on faith and country.”

Thankfully, their charade is now exposed for even the most naive to recognize. They will not have succeeded in their mission.

We have waited a long two years for this day to come and hope that the next government will live up to expectations to bring back fairness, justice and some sense of loyalty to tradition. Our community has been badly hurt by Netanyahu, but there is optimism that should he indeed become prime minister again, he will remember the people who put him in power to begin with and who remained loyal partners with him as long as he allowed. He will remember his commitments and the path followed by his grandfather in Volozhin and his father-in-law in Novardok.

It is probably too much to expect the anti-chareidi bigotry to be toned down in the media and amongst the likes of Yair Lapid, but, at least for now, we are optimistic that change will be a good thing.