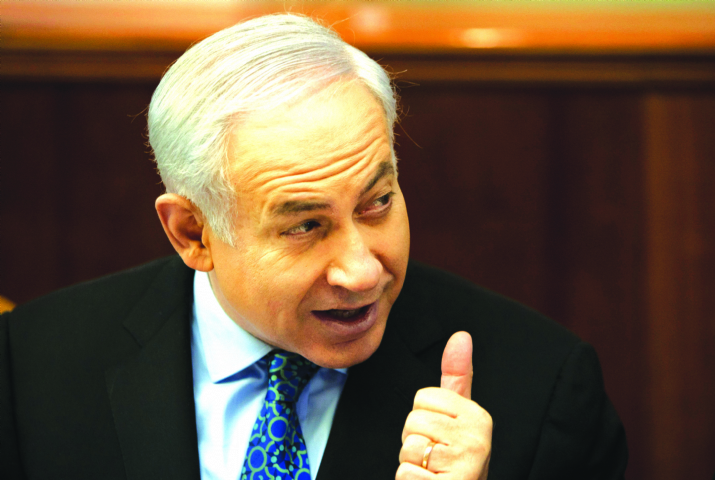 Three months ago, in February, Israel's Supreme Court issued a ruling on the ten-year-old Tal Law that was supposed to gradually ease the yeshiva population into army service. The court said that the Tal Law was not serving its purpose, and it was perpetuating the exemption of yeshiva students from army service. Therefore, it was ruled unconstitutional. After the expiration of the law in August, the court said, the government will not be able to renew it in its existing form. Of course, this raised the vital question â€“ what will happen in August? Will the approximately 62,000 yeshiva students of Eretz Yisroel be able to continue learning without hindrance?
LIEBERMAN’S EMPTY THREAT

Last week, MK Avigdor Lieberman, leader of Yisrael Bateinu, submitted a bill that his party proposes as a substitute for the defunct Tal Law and said that he will put it up to vote in the Knesset on May 9th. The terms of the bill are draconian. Regarding yeshiva students, the bill begins by stating that: “(A) The Minister of Defense may postpone one’s presentation for IDF service for the sake of Jewish religious studies.”

However, the bill adds two conditions: “(a) The Minister of Defense may exempt from IDF service an outstanding yeshiva student, upon the recommendation of the Rosh Yeshiva. (b) The number of service deferrals and exemptions granted under this section shall not exceed a thousand per year.”

A mere thousand exemptions a year would mean the end of Israel’s flourishing yeshiva world as we know it. The bill clearly states, “The Deferral of Service Act for Long-term Yeshiva students of 2002 (5762) is hereby overturned.”

The bill explains its rationale, piously citing the Rambam as justification for a new paradigm:

“Serving in the IDF, along with its being an army of the people, is a sine qua non for Israel’s existence. This law proposal prevents draft dodging and creates a situation in which those who cannot serve in the IDF can serve instead in the civilian or national service. This bill applies to all citizens of Israel: Jews, Muslims and Christians, as well as to religious, Ultra-orthodox.

“The idea that Torah study somehow forbids seeking employment or justifies deferring IDF service is incompatible with the Jewish faith. Maimonides explicitly states: ‘Anyone who decides that he will occupy himself with Torah and will not do any work profanes the Name of G-d, degrades the Torah, extinguishes the light of religion, hurts himself, and removes his life from the world to come — for it is forbidden to derive any benefit from matters of Torah in this world’ (The Laws of Torah Study 3).”

In addition, the bill also warns that anyone failing to fulfill his term of army or social service will lose all rights to government funding: “The law states that whoever does not present him/herself for national service — whether it be IDF service or civilian service, is not eligible for any allowance, grant or any payment from the state. The purpose of this section is to prevent those who evade service from relying on state funding.”

On May 9th, Lieberman’s party also intends to raise issues of state and religion in general including the laws presently governing geirus.

Last Shabbos, Lieberman dropped what he considered a bombshell, telling a press conference that his party may leave the government coalition after the vote of May 9th.

“The ruling party promised us it would arrange the conversion issue within three months of [the coalition’s] forming,” he said. “Three years have already passed. Our commitment to the coalition is over and we also have a commitment to the voters. We are going to make decisions. In another ten days, we will present an alternative to the Tal Law in the Knesset and then we will assess where we are going and when. Conscription for all — this is what we will vote for. Conscription for all including the chareidim and minorities also, we are not willing to give up anyone. If they don’t reach a compromise with us, we will reach a decision. I hope the chareidi parties accept it.”

“We are a responsible party,” he added. “We did everything to preserve the coalition. The best date for elections is the original date, but we are not hostages.”

Lieberman’s threat was empty as he is not the only politician seeking early elections before the 18th Knesset reaches the end of its four-year-term in February 2013. On Motzoei Shabbos, probably in reference to Lieberman’s remarks, Prime Minister Binyomin Netanyahu said he would not hesitate to call for early elections if his coalition partners try to blackmail him regarding budget matters or the Tal Law. In fact, Netanyahu’s Likud party is likely to be the biggest winner in new elections and will probably not need Lieberman’s Independent Party to form a new coalition.

On Friday, Labor Party chairwoman, Shelly Yachimovich, said she plans to submit a bill to dissolve the government in a few weeks. She complained that “after three years of government, Israel has reached unprecedented gaps between poverty and wealth… galloping erosion in the situation of the middle class… and an international record for employment of contract workers.”

In fact, there has been talk of early elections for months.

On Sunday morning before a weekly Cabinet meeting, Netanyahu met members of a “suckers rally” that had been staging a weeklong demonstration opposite his office protesting what they regard as unfair army exemptions.

“The sharing of the burden must be changed,” Netanyahu told the protesters. “What has been is not what will be. This is our second meeting in recent months. I know there are many opportunists who voted for an automatic extension of the Tal Law. I am not one of them. The Tal Law will be changed for a more egalitarian law, a more just law, and I will bring this about. The new law will also include civilian service for Arabs. We must do this without dividing sector from sector. This change must be made by expanding frameworks and increasing budgets. This is a goal of high importance for the country’s security.”

“There is nothing new in all this,” said Deputy Health Minister, Yaakov Litzman (United Torah Judaism). “This is cheap popularism. If they want elections all that much, we are as ready as they are.”

“Settling the issue of yeshiva students and their legal status appears in the coalition agreement signed by all parties,” he added. “Everyone is obligated by its terms including those who are suddenly demanding conscription for chareidim… The recent Supreme Court decision regarding the Tal Law requires us to find a solution exactly as the Prime Minister and government are doing with the Migron issue. What’s the difference between Migron and the Tal Law? There too, there is a Supreme Court ruling, yet the government is investing energy in finding an agreed solution. The Tal Law is exactly the same The chareidi representation will not give way regarding the issue of arranging a legal status for yeshiva students with the clear principle that whoever wants to study Torah should be able to do so.”

In response to the danger of conscription, Rav Chaim Kanievski cited Rabbi Yirmiyah ben Abba’s statement that “in the generation when the son of Dovid comes, accusations will be raised against talmidei chachomim.” As to those who fight against the Torah world he said, Hashem guards all those who love Him, and He destroys all the wicked. And regarding what may happen if there are no exemptions this summer and bochurim will be considered deserters he said that the main thing is to sit and learn with hasmodah and Hashem will help.

THE ONLY QUESTION IS WHEN

The Knesset’s summer session opened on Monday under the shadow of early elections. In his opening speech, Knesset Speaker MK Reuven Rivlin said the 18th Knesset may close early.

“This seems to be the last session of the current Knesset since the entire country, opposition and coalition, agrees that the Knesset should go for elections, so that the next Knesset will be able to decide on issues that are not simple in the life of our nation,” Rivlin said. “The argument is only about when to hold an election.”

The Prime Minister said a final decision will only be reached next week when he completes shiva for his father. In the event early elections take place, polls indicate that Ehud Barak’s Independence Party would not reach the threshold required to participate in the elections. His policy of pleasing Obama at the cost of enraging a large sector of the Israeli public appears to have hurt him. Netanyahu’s Likud party is expected to win with 32 seats, Kadima is expected to get 13 seats, and Labor 15-17 seats. Shas may retain its 11 seats and other religious parties are expected to stay more or less the same. Of course, polls change from week to week.

Unfortunately, there is a danger that the new elections may center on the Tal Law issue. Litzman warned against anti-Torah sentiment becoming an important plank of a new election.

“Today, Netanyahu and Lieberman are fighting it out on the back of the chareidim,” he said. “The public will cheer for whoever beats ‘Moshke’ the hardest and the fastest… we cannot allow them to benefit from trampling on the dignity of Torah students.”