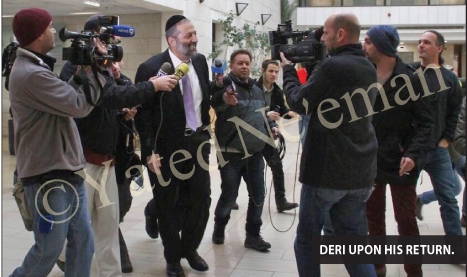 A day after Shas Moetzes leader Rav Shalom Cohen wrote to Aryeh Deri that he would not tolerate his resignation from Shas, Deri convened a special meeting of Shas MKs and announced his determination to lead the party to victory in the upcoming elections.

“With humility and a bowed head I accept the order of the Moetzes Chachmei Hatorah led by the Moetzes president Rav Shalom Cohen,” he announced at a press conference. “During my whole life, I was always educated and taught others in spirit of the command ‘to do all that they instruct you.’ Therefore, after a difficult period during which I conducted personal and familial soul-searching and weighed the relevant considerations, I decided that the Shas movement, the movement of Maran with its hundreds of thousands of voters, is more important than any other consideration.

“…I will continue to lead the movement in order to continue Maran’s great projects and to be a mouthpiece for all those whom the state has left behind,” Deri concluded.

Deri’s promise to return to Shas was actually a promise not to leave the movement, for as he pointed out, although the Moetzes allowed Deri to resign his Knesset seat, it never sanctioned him to cease functioning as chairman of Shas.

Deri’s final impetus to remain came from a letter Rav Shalom Cohen had sent him a day before his announcement.

“I write this after sorrowfully receiving your letter at the Moetzes Chachmei Hatorah meeting,” Rav Cohen wrote. “You have also told me what you think about your place in the movement. Because I was sitting shivah for my sister a”h, I delayed answering. Also, I have carefully considered the matter, particularly the issue of desecrating Rav Ovadiah Yosef’s honor. And I tell you, ‘May your curse be upon me, my son.’

“You have no responsibility regarding the matter [of Rav Ovadiah’s honor]. Responsibility rests solely upon the Moetzes Chachmei Hatorah. ‘Do not fear and do not tremble.’ Of one who is fearful and softhearted the posuk says, ‘Let him go and return home, lest he melt the heart of his brother.’ Boruch Hashem, we have seen that you led the movement high handedly and fearlessly, particularly now when we merited, thanks in part to your activities, to the fall of the malicious government which persecuted all that is holy and caused the outcry of impoverished orphans and widows to rise to Hashem.

“Therefore,” Rav Cohen concluded, “you have absolutely no permission to leave. I hereby instruct you to return and lead the holy movement which is utterly dedicated to holy causes in order to increase the glory of Heaven, hear the cry of the poor, and increase Torah among the people of Yisroel. The merit of your mesiras nefesh and your concern to increase the glory of Heaven will certainly help you and your family. Concerning you will be fulfilled the verse [said of Yaakov], ‘And the man became great and became constantly greater until he became very great.’ May you long lead your party and may Hashem grant you mazal to become great, and to increase and glorify the Torah.”

Shas MK Yaakov Margi said that Deri underwent a turnabout during the past two weeks.

“Anyone who saw Aryeh on the day he left the Knesset on that Wednesday night and sees him today would think he saw two different people,” he said. “You could see that then, he was upset, torn and determined… Aryeh made a mistake not bringing a camera to that meeting. Had the meeting been recorded, it would be easier to persuade people that there was no spin here.

“Aryeh was in emotional turmoil, he was torn, he was determined. Someone who understands body language could see that on his face. We know Aryeh in his difficult times, we knew him during the most difficult hurdle he faced in the past. He did not look then as he looked on the night he resigned.”