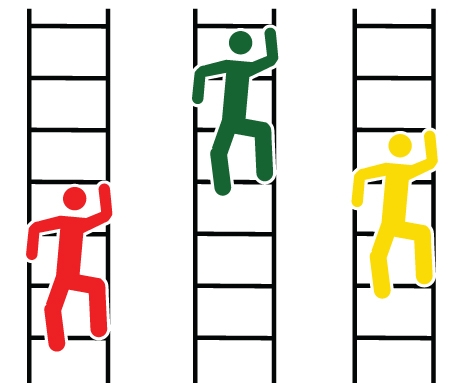 Did you ever wish you were someone else? Do you ever envy friends for their accomplishments, wishing that you could do the same? Do you ever feel like a loser seeing how others make things happen while you wonder what is happening? Sometimes we become so enamored of what others are doing that we lose sight of how special our own achievements are.

Recently, a friend of mine was privy to a conversation between a talmid chochom who is a successful marbitz Torah and a dedicated askan very much involved in chessed. The talmid chochom, Rav Reuven, approached the baal chesed, Rav Shimon, and said, “I’ve wanted to tell you for a while already what a hero you are. I personally know of a number of families you’ve helped. What great zechuyos you have.”

Rav Shimon blushed at the praise and said humbly, “That’s very kind of you to say, but I don’t really do that much. I merely mobilize others into action. They do the lion’s share of the work.”

“That may be true,” countered Rav Reuven, “but your galvanizing people into action brings so much joy to others. Do you have any idea how many mitzvos you are accumulating? I’d venture to say that, at any given moment, you are being followed by legions of malachim created by your deeds. I wish I were able to do what you do.”

“To the contrary,” answered Rav Shimon. “I have never mastered learning a blatt Gemara and most certainly cannot teach it to others. What you do is the holiest of work.”

My friend came away with the feeling that the maggid shiur wished he could be the baal chessed and the baal chessed wished he could be the maggid shiur. While it is healthy to admire the attributes of others and try to emulate them, we mustn’t forget that we, too, are accomplishing a great deal. Every individual is blessed with his or her own talents and limitations, and what is expected of one person is not expected of another. There is a keen example of this in this week’s sedrah.

Yosef was mercilessly torn away from his beloved father, Yaakov Avinu, and was brought down to Mitzrayim, where he was sold to Potifar. Potifar’s wife cast her eyes upon Yosef and tried coaxing him to sin, but Yosef refused. “Then there was an opportune day when he entered the house to do his work, no man of the household staff being there in the house” (39:11). It was a festival for them and all had left to serve their gods. Potifar’s wife feigned illness and remained at home. Yosef was tempted to listen to her that day, but the countenance of Yaakov, his father, appeared to him in the window.

“‘Yosef, my son,’ he said, ‘in the future, all of your brothers’ names will be inscribed on the stones of the Eifod and you will be with them. Do you want your name to be erased?’ Immediately, Yosef refrained from committing the aveirah” (Sotah 36b).

Let’s try to imagine what thoughts could have crossed Yosef’s mind. “Really? All of my brothers will be engraved in the Eifod and not me? They, who in their jealousy stole me away from my father and must have broken his heart? They, who were oblivious to my cries for mercy and who sold me as a slave? They are entitled to be in the Eifod? I, a youngster in a strange land, a center of immorality, both enticed and threatened by my master’s wife, without any relative or friend to lean on to get me out of this situation…I will be erased from the Eifod?! My brothers willingly sold their very own brother to the Yishmoelim. They will be engraved in the stones and I, who was forced into this misery, will be left out?”

Still, the face of Yaakov appeared with this warning.

Rav Yosef Chaim Sonnenfeld zt”l points out that from here we see that one man’s deeds are not measured in comparison to another. Of course their sin was more egregious, but each person is judged separately and tested according to his own inner strengths and spiritual level. Although their sin would not have disqualified them from the Eifod, his sin would have.

We find a similar idea regarding Akeidas Yitzchok. After the Akeidah, the Soton, seeing that he couldn’t dissuade Avrohom from this great sacrifice, tried to get him to regret doing it. He went to Sarah and told her that Yitzchok was almost slaughtered on the mizbeiach. Shocked at this news, Sarah Imeinu’s holy neshamah left her. We know that Sarah was greater than Avrohom in nevuah. How could it be, then, that Avrohom was able to fulfill the word of Hashem with this nisayon, while Sarah could not survive from even the thought of it?

The Sefer Meilitz Yosher answers that Hashem does not deal oppressively with His creations (Avodah Zarah 3a), and He does not send a nisayon to a person if he can’t handle it. For the true purpose of a nisayon is not merely to test the person, but to also bring out the inner strengths of a person from potential to actual. Undoubtedly, a particular nisayon is meant for one with particular qualities for that test. A test that one tzaddik is expected to pass may be considered beyond the kochos of another.

Avrohom Avinu had the inner strength to suppress the feelings of love he had for his son, Yitzchok. Thus, he was put to the test and precisely fulfilled that which was expected of him. Not so Sarah Imeinu. While she was greater than Avrohom in nevuah, she did not possess the ability to overcome her emotions for her beloved son, and therefore the nisayon was not given to her. The Soton understood this, so he used it as an opportunity for causing her demise.

One of the greatest acts of kiddush Sheim Shomayim throughout history came through Chananya, Mishoel and Azaryah, who refused to bow down to Nevuchadnetzar’s statue. These great tzaddikim were thrown into a flaming furnace and, before the eyes of many onlookers, walked around happily within the fire with a malach following them. This incident made an impression on the other nations, who saw how Hashem protects those faithful to Him.

And yet Chazal tell us that it was only because they were threatened with death that Chananya, Mishoel and Azaryah were able to refuse bowing down to the statue, but had they been given lashes, they would have succumbed and bowed to it (Kesubos 33b). They were ready to give up their lives, but not to endure long torture.

Why did Chazal tell us this? Were they trying to minimize the greatness of these three great tzaddikim?

The Chiddushei Harim explains that Chazal are teaching us that Hashem will not test someone with a situation that He knows the person does not have the ability to handle. This is why Hashem sent them the test of forfeiting their lives and not the test of bearing extended pain, which Hashem knew was beyond their kochos.

Just as different people have different strengths in enduring nisyonos, they are blessed with varying talents, capabilities, and life situations. A commonly asked question: How is my neighbor able to run a business, learn a few hours a day, and participate in various chessed endeavors, while I can barely stay awake for the one-hour seder with my chavrusah at night? Or: How does she manage to run such a large family, keep her home immaculate, and have time to bake all those fancy pastries for tzedakah functions, while I can barely get my act together?

First of all, no one ever knows what’s doing by “yenem.” Are they really handling things so smoothly? Or are they always under pressure and it all comes at the expense of the menuchas hanefesh of the household?

Secondly, life is not a competition. We are not judged by what others do. We are judged by what we are accomplishing relative to the kochos that we have been given and the life situation that we find ourselves in. It has been said that “nobody can be everybody, but everybody can be somebody…and that somebody is ourselves.”

As we begin Shemoneh Esrei, we say, “Hashem sefosai tiftach – My L-rd, open my lips.” The Ramban offers a beautiful interpretation. The word sefas can also mean boundary, as in sefas hayom, the border of the sea. As we begin our tefillah, we ask Hashem, “Ribono Shel Olam, we are merely flesh and blood, and our ability to express ourselves the way we should is limited. Please, Hashem, sefosai tiftach, open my borders and my confines, and enable me to praise You and to thank You, and to articulate my entreaties to You” (heard from Rabbi Chaim Wein).

In this vein, we can perhaps explain another request that we make after Shemoneh Esrei: “Elokai netzor leshoni meira usefosai midaber mirmah – My G-d, guard my tongue from evil and my lips from speaking deceitfully.” We may also be saying, “My G-d, please prevent my borders from deceiving me.”

Some people are blessed with abilities that allow them to achieve in many areas, but they don’t realize it. Their own personal borders are wider than they think and they are underachievers. Others mistakenly think that they could be doing more when they really can’t. Their boundaries are narrower than they think. We ask Hashem to grant us the proper perspective of what we could and should be doing. So we ask, “Do not allow our borders to deceive us into thinking we are someone we aren’t.”

This is especially true when it comes to being mechanech children. “Chanoch lanaar al pi darko” (Mishlei 22:6) – according to “his” way, “his” capabilities, and “his’ spiritual makeup, not according to his siblings and not according to his classmates. Every child is an individual and should be guided and educated accordingly. While we all want the best and highest level for our children, we must bear in mind that expecting things beyond their kochos is simply counterproductive. Taking stock of the inner resources of the individual and maximizing his potential is the key for a productive, fulfilling life, not looking for achievement that is beyond us.