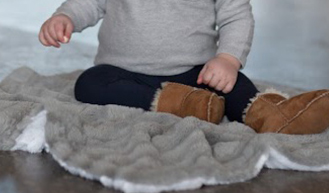 If you’re living in Lakewood and you’ve walked out your door over the past year or two, then you’ve seen them. They’re little, they’re colorful, and they’re oh-so-cute. What are they? Why, Lil Leggs leggings, of course. They adorn the tiny, chubby legs of just about every member of the three-and-under set around town, or at least that’s the way it seems.

When dynamic duo Leah S. and Gitty G. started their brand from the ground up, they had no idea that they were on the verge of revolutionizing the way Lakewood dresses their kids.

This week, the two allowed themselves a short breather from their busy schedules to tell the Lil Leggs journey, from conception to production, and to give us a peek into why we were all (happily!) caught in the leggings’ storm.

Yated: Shopping in a local kids’ clothing store today means seeing those tempting piles of brightly colored leggings. How did this company begin?

Gitty G.: It was a few years ago, when I was newly married and had just had my first baby, a boy. I was new to town, and as I went around shopping for my baby, I felt like there was nothing to put on his legs.

In the non-Jewish stores, all I could find were leggings with ruffles and lace and all the wrong colors, while the local retailers had beautiful things, but they were pricey. I didn’t want to spend $25 for a regular pair of weekday pants. How could I buy six of those?

Leah was one of the only people in Lakewood I knew, and I was complaining to her about my dilemma, when she answered, “We should make something!”

Leah S.: It was a total joke. I wasn’t married myself yet, so I didn’t have this problem, and I just joked with her that we should start a line ourselves of cute, affordable leggings. Gitty didn’t see it that way, though. She took the idea and ran!

Y: How do you go from joke to company?

GG: I was in school at the time, while also working in a small office in a basement by myself for much of the day. A lot of the time, my boss just needed me there to be able to answer the phone. I asked him permission to do other things if I had finished my work, and he said yes. Honestly, it was wonderful to have a mission, because I had been very, very bored!

I began researching how to start a clothing company. I emailed about 200 manufacturers to try to find one that could create what we had in mind. I probably got about 25 responses from those 200, and of those, only about five seemed on the right track.

Between the two of us, we had zero background in the field and zero contacts. But it was a fun side project to work on.

LS: When I told my friends that we might actually start a leggings company, they literally laughed in my face. They knew I had been joking about it and it really seemed funny that we were thinking about going for it, for real.

The truth was, I had been thinking about start-ups in general and trying to figure out what there was a lack of in the market. When Gitty mentioned the “leggings lack,” I thought she might have hit on the right idea.

Y: Once you had some manufacturer options, how did you give them a sample of what you wanted? With no background in fashion, did either of you sew or draw professional designs?

LS: It took us a very long – probably about six months of work – to get the fit and shape right. We found someone who could create a pattern of what we wanted and bought it from her. Then we traced it by hand on fabric we had purchased from the fabric shop.

We sat and cut and trimmed and revised and just made a very rough sample pair that we sent to the manufacturer. At the time, we thought it was perfect, but now, when we see our early samples, we’re kind of mortified!

GG: For months, we sent samples back and forth to the manufacturer. We would revise and send it back for them to make, then they would return it, until we were finally happy with the product.

The minimum orders seemed huge to us at the time: 2,400 pairs. We placed the minimum order with a choice of four colors. We wanted to present ourselves to customers as a legitimate company, but minimize our risk.

We hired a wonderful photographer, Esti Waldman, and did a nice little photoshoot with three babies, four color leggings, and that was it. We started circulating the pictures and figured we would just sell the leggings from my basement.

Y: Gitty, you were married, with a baby, a job and in school – and now doing this on the side. Leah, were you doing other things or just focusing on this business?

LS: Actually, I had gotten engaged in the middle of the process, so by the time the first shipment of orders came in, I was married and had moved to Israel.

GG: When we started, I had a lot of extra time, but by the time it really got off the ground, she was gone and changes in my schedule meant that I was super busy. I remember leaving bags on my door all day long for people to pick up their orders, because I was never home.

At that point, we kind of said, “This was a nice idea, but we don’t have time for it, so let’s just sell off this stock and move on.” We didn’t want to lose money.

GG: We got a phone call from a store in Lakewood that had seen our ads and asked to sell our leggings wholesale. We had always intended to sell it ourselves, but it seemed like a good solution to our time problem. The first day that the store got in our product, we got phone calls from five other stores, asking to sell our leggings, too.

LS: When we saw that this was something that the stores wanted, my husband I decided to try and take it bigger. I was already selling the leggings from my apartment in Israel, and my husband sat and called retailers in just about every Jewish community that exists.

It’s very hard to break into the frum market, and there were a lot of disappointments. A lot of people told us no. But, boruch Hashem, we got into about 25 stores that first year.

We had barely broken even at this point, so we said, “Let’s make it bigger and see what happens.”

GG: We went from four colors to ten, and 2,400 pairs to 7,500. We also added a pattern for the spring season, shorts, in addition to the long leggings.

Y: At this point, have you grown further?

GG: We are now in many more stores than that, we had 18 colors this past season, and we finally moved our operation to a professional warehouse with employees and an office manager. We still work hard, but we’re able to focus on growing the company without all the nitty-gritty labor.

Y: Do you think leggings will last forever or are they a passing trend?

GG: Personally, I think they will, because they’re cheap and comfortable.

LS: We don’t see the trend going anywhere. We do have other ideas that we’re working on, though, and we plan on expanding in future seasons.

Y: When you made your original joke, Leah, could you have imagined the huge business that would come out of it?

LS: Never! We tell everyone who asks, “Don’t try this at home.” The key is that we had low expectations. We started from the bottom, had a lot of siyata diShmaya, and put in years of hard work.

People think that we sit and watch our money rain down. There was an enormous amount of stress and effort, and the whole time, we didn’t know if anything would come of it. It’s clear that Someone was guiding us from the beginning.

Y: I must know, Gitty, does your son have something to wear now?

GG: Always! He would wear our samples as they came in, and now I know both my babies will always have a fully stocked wardrobe.