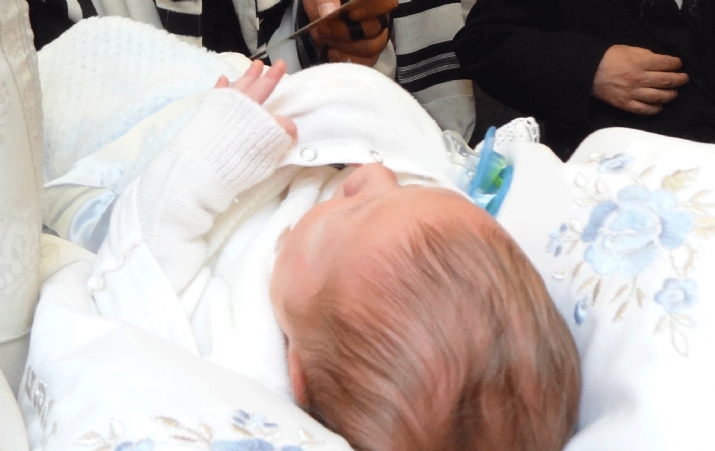 The Centers for Disease Control, an agency of the US Department of Health and Human Services, just published a report stating that the risk for herpes simplex virus type 1 (HSV-1) following circumcision with oral suction, or metzitzah b'peh (mbp), was over 3 times greater than among male infants who did not have mbp. However, a closer examination of the data and methodology set forth in the report could point to a contrary conclusion â€“ the risk of HSV-1 with or without mbp may be statistically the same. If so, the demonization of mbp caused by this report may lead public health officials away from addressing some real â€“ and avoidable â€“ causes of neonatal HSV-1.

The report, published in the June 8th issue of the CDC’s MMWR newsletter, looked at cases of HSV-1 in NYC dating from April 2006, when the disease became mandatorily reportable by hospitals, healthcare providers and clinical laboratories, through December 2011. It found 5 cases of HSV-1 after mbp during that time period, out of an estimated 20,493 mbp circumcisions (or 1 in 4,099). This rate, it said, was 3.4 times greater than that found in the City’s general population. CDC editors commend the report’s findings as “consistent with a cause-and-effect relationship” between mbp and neonatal HSV-1. Asserting that the data “strongly suggest HSV-1 can be transmitted to a neonate” by mbp, the CDC is encouraging “preventive” public-health tactics and, if necessary, even “legal measures” to ensure “that parents can choose not to have their newborn exposed” to HSV-1 through mbp.

Such alarming conclusions about a millennia-old religious practice have rightfully occasioned concern in the public-health arena as well as in the Jewish community, warranting a second look at the terms of the study. This further review exposes several troubling weaknesses, a few of which follow.

In order to connect neonatal HSV-1 with mbp, researchers looked for cases of HSV-1 that had onset of symptoms as much as 20 days post-circumcision. Yet the universally accepted view is that HSV-1 has an incubation period of 2 to 12 days from exposure. Limiting the incubation period to 12 days — or even extending the limit up to 19 days – would eliminate one of the cases in the report (which, given the small number of cases, would be a 20% reduction), bringing the HSV/mbp rate down to 1 in 5,123.

We learn in an editorial note that “the findings in this report are subject to at least one limitation. . . . because not all of the cases were in ultra-Orthodox Jewish families.” The intent of the editors is not clear. This may mean that the study determined “relative risk” by using a formula that had as its “denominator” an estimated population of ultra-Orthodox Jewish males, but its “numerator” — actual cases of neonatal HSV-1 — may have included an unspecified number of cases from outside its “denominator” population. This would have the effect of skewing the rate by driving it artificially higher.

Even if the numerator cases were all within the denominator population, the formula was arbitrary in another respect. As the editors explicitly note, ”relative risk depends, in part, on assumptions . . . and those assumptions might not be valid.” To determine the size of the population that practices mbp. the researchers made at least two critical assumptions, either or both of which are at least equally likely to be wrong: that no more than 50% of male children in yeshivas underwent mbp, and that no Jewish children outside of yeshivas had mbp, even if their circumcisions were performed pursuant to Orthodox custom. At best, then, the relative rate was — as the editors state — an “estimate.”

Determining the population size with greater accuracy could drastically reduce the rate of HSV-1 after mbp, perhaps to a rate even less than that of the general population. This is not mere speculation: one clear counter-example to the report’s findings is the community of Kiryas Joel in Orange County, which has an estimated 100% rate of mbp and 0 reported cases of associated HSV-1.

Another significant weakness in the report is that it fails to cite even a single case where mbp was definitively determined to be the cause of HSV-1, for example by DNA testing. This despite the fact that some attempts were made on a cooperating practitioner to definitively link mbp to HSV-1, but the report relates that no link could be made: “Specimens collected from mohel A . . . were . . . negative by culture and polymerase chain reaction (mouth swabs).” Nor has any link ever been made. Notwithstanding the heightened focus on mbp and despite mandatory reporting of neonatal HSV-1, no definitive case of mbp-caused neonatal HSV-1 exists anywhere in the medical literature. Without any such case, the most the editors can say is that the data “are consistent with” or “strongly suggest” a correlation to mbp.

On the other hand, the new data could actually prove a contrary conclusion — that mbp poses no statistically greater risk of HSV-1.

Correcting for the overextended incubation period and/or inaccurate population figures, the report’s findings of HSV-1 incidence after mbp would be statistically equivalent to the rate found nationally. The national rate, as stated in medical literature, is anywhere from 1 in 1500 to 1 in 3200. This rate can be influenced by factors such as living in a metropolitan area and family size — dense areas and big families tend to have higher rates. Considering that NYC ultra-Orthodox Jews have large families and live in the most densely populated US city, neonatal HSV should occur closer to the higher (1/1500) rate. This rate, though, includes both HSV-1 and HSV-2, and HSV-2 has never been associated with mbp. Even assuming as much as a 2:1 to 3:1 ratio of HSV-2 to HSV-1, the resulting rate of HSV-1 would be 1/4500 to 1/6000, right in line with the report’s data as corrected. (Indeed, it is curious that the report estimated the rate of incidence in the general NYC population to be much lower than the presumed national rate. Is neonatal HSV-1 that much rarer in NYC than elsewhere in the country?)

Even without adjusting for incubation period or population, the report finds the same rate – one HSV-1 case per year – both before and after neonatal HSV-1 became reportable in 2006. (In fact, right-sizing the incubation period would make the rate lower after HSV-1 reporting was mandated.) This is quite significant, as one of the reasons neonatal HSV-1 was made reportable in NYC stemmed from a suspicion that cases occurring after mbp were somehow hidden, and thus that the actual incidence was much higher than previously known.

Ultimately, focusing on mbp as a mode of transmission for HSV-1 may have the effect of ignoring other routes known to transmit the virus, with potentially tragic consequences. It is well established that HSV-1 is much more easily transmitted by symptomatic individuals than by asymptomatic “shedders.” No practitioner of mbp has been shown to be symptomatic, so those presuming mbp to transmit HSV-1 assume practitioners are shedders. And yet, as the report mentions, attempts to find such shedding have failed: “”mohel A had no evidence of shedding HSV when tested.” Moreover, one case known to be included in this report involved a newborn in close contact with a symptomatic sibling who had recurring outbreaks of active herpes lesions. This was known to the attending physicians, and thus, we assume, to the researchers. Inexplicably, this fact was apparently ignored, and instead focus was trained on mbp. Nor were any follow-up attempts made to educate parents about the dangers posed to newborns by contact with symptomatic individuals — whether they are siblings, caregivers, or the parents themselves. Even the researchers state that 5 times the number of HSV-1 cases occurred in the study’s timeframe where mbp was not even performed. Is it unreasonable to assume that HSV-1 was transmitted in most if not all of those cases by people with symptoms in close contact with newborns? One has to wonder if the single-minded focus on mbp might itself be a public health issue, allowing for a much more common danger — one widely known to have serious, even fatal, outcomes.

In its Notice of Public Hearing in early 2006, the NYC Department of Health and Mental Hygiene (headed at the time by the current director of the CDC) wrote: “Making neonatal herpes reportable would ensure that such instances [of neonatal HSV-1 after mbp] are reported, and thus enable the Department to identify outbreaks of this disease in a timely fashion, identify the source, and intervene to prevent subsequent cases.” Ironically, this new CDC report may finally quash the suspicion of underreporting, and thus belie the notion that mbp is the public health issue concerning neonatal herpes that officials need to address.