Can’t Bear The Cold? Straight From The Desert: Tips for Getting Warmer 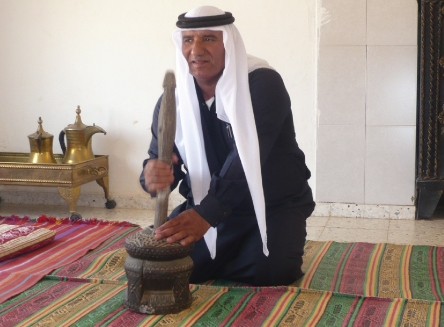 Exclusive interview with Sheikh Akel al-Atrash, chief of Bedouin al-Atrash tribe of the Negev, about the Bedouin ways of dealing with the stinging cold. Are you finding the cold temperatures unbearable? Aside from modern heating methods, there are some old alternatives that can warm you up when the cold strikes. Some people handle difficult weather with simple, ancient methods. Amongst them are the Bedouins, dwellers of the desert. While we may not be able to adopt all of their techniques, they certainly make for an interesting read.

BONFIRE IN THE DESERT

It is well known that deserts tend to become quite cold at night, even after a sweltering summer day, so the al-Atrash Bedouin tribe of the deserts in the Negev are a great source of information. “One of the main Bedouin traditional means to defeat the coldness in the desert is simply lighting a bonfire,” says Sheikh Akel al-Atrash. “We light the fire in a designated place that has been dug for this purpose, and the entire family sits around it in circle to warm up. The bonfire is usually located in the very middle of the space in which it is burning, in order to warm up as many people as possible who sit around it.”

According to Sheikh al-Atrash, modernization has invaded the Bedouin tribes as well and nowadays, they rarely use the above mentioned traditional method. “In today’s day and age, we mainly use special metal fireplaces that we install in the living room. Those are big ovens that are used for cooking coffee and food, with chimneys on top. The heating effect of those devices is quite strong and the heat level is adjustable. In most cases this fireplace replaces the bonfires.”

How else do people of the desert evade the claws of cold weather? Sheikh al-Atrash says, “Using lamb wool for maintaining body heat is very common by us. Nowadays, most of the wool is replaced with synthetic substitutes. However, if you are aware of the unique qualities of genuine wool, you must know that it is irreplaceable. In addition to warming the body much better, genuine wool is also a healthy material. We use it for different purposes, such as stomach poisoning. Children who suffer from stomach poisoning are wrapped with wool around their stomach. It helps. The various substitutes in the market do not possess the same qualities as real lamb wool.”

Sheikh al-Atrash was kind enough to provide additional tips regarding drinking habits in cold days. “When it gets very cold, we often boil the milk before drinking it,” says Akel al-Atrash. “It does not mean we drink it while boiling. The effect of boiled milk, even after cooling down, is increased and it warms the body more effectively.” The famous Bedouin tea is also a fundamental component in coping with cold weather. “In the winter, we drink more of our tea, which we concoct ourselves. Aside from drinking the tea, there are special types of herbs that we use mainly in the winter, since they contribute to the natural heating system of the body.”

Which herbs are used for tea infusion? The Sheikh gives a few examples. “Sage (also known as salvia), chamomile and bayisran, a special herb that only grows at certain times and locations. It grows mainly in the southern Negev in wadis, after floods. It is picked around March-April and kept until winter for concocting purposes.” The desert tribes also have medicine for treating frostbite, as Sheikh al-Atrash concludes, “In cases of frostbite, we assist the injured using special potions. We give them herbs to drink, wrapping them with lamb wool, which balances the body temperature and maintains it steadily. For a very long time, this treatment has been proven rather effective and healthy.