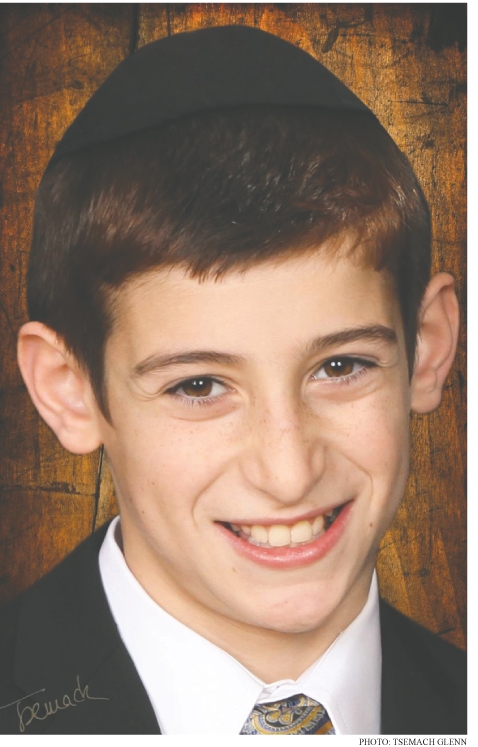 To write about the petirah of a ten-year-old child feels all wrong. I want someone to stop me and tell me it is all a mistake. That nothing happened. That a freak, tragic accident did not take the life of Aron Sholom Tepfer aâ€h, son of Mr. and Mrs. Tully and Rachel Tepfer of Cedarhurst, whose petirah took place on Shabbos. Aron Sholom was seriously injured when he struck his leg against a stationary boat propeller in Reynolds Channel off Atlantic Beach. He was first brought to the closest hospital, St. John's Episcopal Hospital in Far Rockaway, but was later rushed to Long Island Jewish Medical Center. Despite the heroic efforts of the emergency personnel and doctors, Aron's precious and pure neshamah left this world on Shabbos morning. The levaya took place on Sunday morning at Yeshiva Darchei Torah in Far Rockaway, where Aron was a student and where his mother is an elementary school teacher.

The levaya was held in the Diamond Bais Medrash of the yeshiva, with the attendees spilling into different parts of the yeshiva, as throngs, including many young children, came to pay their last respects to Aron Sholom and to show support for the Tepfer mishpacha as they grope their way through the most difficult days of their lives.

Rav Dovid Spiegel, mara d’asra of Bais Medrash of Cedarhurst, delivered the first hesped, explaining that Aron Sholom had been registered in Yeshiva Darchei Torah, his yeshiva shel matah, but obviously the Ribono Shel Olam needed someone in the Yeshiva Shel Maalah.

“We all loved him,” Rav Yaakov Bender, rosh hayeshiva of Yeshiva Darchei Torah, said after breaking down into sobbing before the large crowd. “What a difficult chore in my life it is to give this hesped. He was the sweetest, understated, ten-and-a-half-year-old boy. Everyone wanted their child to be in his class.”

Rav Bender went on to say that there are two types of hester Ponim. “The first is what happened in the times of the Nazis, with no one wanting to be found. The second could be likened to when a child plays hide and seek with his parent. The child wants to tell his father, ‘I am hiding. Find me.’ Ribono Shel Olam, You found us. We found You.”

Rav Bender pointed out that each member of the family is a mentch, and that children as wonderful as this do not grow up in a vacuum. The family has simchas hachaim, he noted, and he tearfully mentioned that Aron Sholom, who had never been in an argument in school, was also a metzuyan in learning. Addressing the family, whose cries filled the cavernous hall, Rav Bender told them, “You are not alone. Klal Yisroel is crying with you. Aron will be sitting in the front row in the Yeshiva Shel Maalah.”

The family’s rov, Rav Yaakov Feitman, mara d’asra of Kehillas Bais Yehudah Tzvi of Cedarhurst, where Tully Tepfer is a Daf Yomi maggid shiur, ascended the podium with free flowing tears. He thanked Rabbi Baruch Ber Bender, executive director of Achiezer, who was with the family from the very start of the crisis, day and night. Also thanked were the two hospitals that worked to save Aron Sholom’s life.

“The rabbeim used to call upon Aron Sholom to make shalom in the class,” Rav Feitman recalled. “Now he has gone to the Yeshiva Shel Maalah to make shalom for the Ribbono Shel Olam… We have to realize that he was a kapporah for all of us. He was on that level. Such beauty of middos, such a cheishek for learning, always with such a lichtige ponim. Rachel, his mother, told me that when he came home from camp, he was on fire with ruchniyus. His whole life was a shirah to Hashem.”

“Tepfer family,” he began, “we are all with you. You are not alone. Klal Yisroel is with you. When Klal Yisroel has tzaar, the Ribbono Shel Olam has the biggest tzaar. When Hakadosh Boruc Hu enacts din, he takes into account all the suffering that will come from it. As much as we don’t understand it, He takes everything into account. The shofar tells us to wake up. This niftar became a cheftzah shel mitzvah. What a wonderful child he was. This was a tzaddik. Klal Yisroel, and especially the Five Towns and the yeshiva, should be nisorer… What we see is the value of life. Hashem gives life only for a purpose. That’s what life is about. A person has so much time, but opportunities somehow get lost. Each one of has to find five minutes more for learning, saying Tehillim, doing a mitzvah by phone – and imagine doing that every day for a whole year.

“Are we using life properly?” the rosh yeshiva continued. “Hashem is saying, ‘Kinderlach, this is the bitter medicine you have to have.’ Let us give Aron Sholom life by using our lives better. Our actions will serve as a tikkun for his neshamah. The Ribono Shel Olam only wants us to become better. He only gives nisyonos to those who can handle it. You can do it. Continue being mekadeish Hashem.”

As Aron Sholom’s rabbeim, Rabbi Moshe Leff, Rabbi Shraga Polter and Rabbi Yitzchak Newman spoke about what a role model he was for his friends and for his rabbeim, and the perfection of his middos at such a young age. Rabbi Newman shared, “He had a good and golden heart. He turned boys’ lives around with his goodness.”

A hush descended upon the bais medrash as Tully Tepfer rose to speak. He addressed his beloved son, saying, “It has been a zechus and privilege to be your parents. You were such a sweet, wonderful boy. The entire family learned so much from you.”

Mr. Tepfer then shifted his attention to the people who had come to hear him speak. “Our entire family experienced the Tochachah this past Shabbos. As difficult as this is, we don’t question it. We accept b’ahavah that this is the ratzon Hashem. The name Aron Sholom came to us separately, both to myself and my wife, at the same time. Aron was a person of greatness and stature, like Aron Hakohein. Our son was also rodeif shalom throughout his brief but special lifetime. He cared about every person, especially those children with challenges. He helped them in whatever they needed. Now we have a deeper understanding of why we called him Aron Sholom. He was shaleim, complete – a korban for Klal Yisroel. “

He shared some insights into the many ways Aron Sholom was well beyond his years. “He never just took out the sheet from his rebbi on Shabbos. He would take a look at it, but then put it down, adding his own comments. He would speak like he was giving a shiur to two hundred people. He also understood true friendship. Even though he was picked to be the pitcher by his baseball team, he chose to give his friend a chance to pitch as well. He did it because he knew his friend really wanted a chance. He had the ability to relate to people of all ages. He knew exactly what to say.”

Just back from summer camp, Aron spent special time this past week with his mother. “This last week,” Mr. Tepfer continued, “my wife got to spend time with Aron. We would talk every single night about him, because we saw how his neshamah was growing, and growing, and growing. I was so looking forward to learning with him to prepare for his bar mitzvah. Now we know why his neshamah was growing so much. He was getting ready to leave this world.”

After thanking the many, many people involved with the family since the tragedy began to unfold, Mr. Tepfer ended with this tearful message to his son: “Our Aron Sholom may have gone back to Hakodosh Boruch Hu, but Aron, you are our connection to the geulah, the pure korban, to bring refuos and yeshuos and strength to our family and to all of Klal Yisroel.”