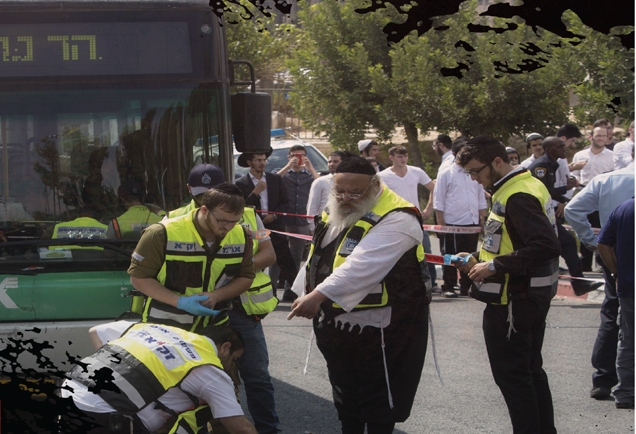 Keeping in constant contact with police and Magen David Edom dispatchers, local Zaka people often arrive at scenes of tragedy before anyone else. Yated spoke to Bentzi Oiring, head of Zaka in Yerushalayim, to find how his organization is holding up under the strain of the past weeks.

How is Zaka holding up under the strain of attack after attack for days on end?

“You have no idea what it’s like. No one who isn’t in our shoes can understand what we are undergoing minute after minute and hour after hour. We’re sleeping in our clothes, especially when you get three consecutive terror attacks as happened this morning. There was one day when I started out with an attack at five to nine in the morning and returned home at 11:30 at night. At night we sleep with our clothes on as something can happen any second. We get warnings about possible attacks all the time.

Do you ever get into dangerous situations?

Certainly! When we arrive at a place where people have been attacked there’s always the danger that a double attack might be in the offing with another planned to take place soon after the first and then we’ll be caught in the middle of it.

Do you have sufficient personnel to deal with the latest catastrophes?

Yes. Take today, Tuesday, for example. When terrorists came in from Jabal Muchabar, we sent fifteen people to Malchei Yisroel Street in Geulah where a car rammed into people and twenty to Armon Hanetziv where a terrorist attacked people on a bus. Then we appointed five people to go along with bodies to the Shamgar Cemetery to tend to what needed to be done with them there. We have enough personnel to do what gets to be done and only hope that we don’t need to use them in the future.

What do you need to do at crisis spots?

We certify victims’ identification and do what has to be done regarding chesed shel emes such as collecting every drop of blood with cherdas kodesh (holy trepidation) to ensure it is buried in accordance with halachah. At the same time we multitask as Magen David Edom medics. We have double vests. On one side we have markings identifying us as Zaka personnel and they can be turned inside out to indicate that we are medics when necessary.

Do you think the police are acting fast and efficient enough to contain the terror?

They police have massive forces everywhere. The speed with which they arrive to neutralize the terrorists is amazing. On top of that, there are often armed civilians at hand to deal with disasters. But there are cases when we get to the scene of terrorist attacks first and could potentially be in danger. In such an event, personnel are instructed to take shelter and wait until armed forces arrive to contain the situation.

Do you remember a situation like that which is going on right now?

13 or 14 years ago things were just as catastrophic busses were being blown up. But that was different from the present situation. To come with knives or cars and make one attack after another in quick succession is something very new.

Who works with Zaka?

We have volunteers of all types, some chareidim and some wearing knitted kippot. Secular members of Zaka are not involved with caring for bodies in chesed shel emes, but they volunteer as divers when people are feared drowned or as jeep drivers in places where there are no proper roads. They are not involved in collecting body parts.

Do you need to know special halachos to be involved in this work?

From time to time we attend shiurim to keep up to date with the many halachos involving all aspects of how to deal honorably with the dead.

What is the worst incident you have experienced?

For me there is no worst incident. Each case I am involved with is terrible in itself.

This morning you were present at a ceremony in Tel Aviv to celebrate the donation of a new ambulance to Zaka in memory of one of its volunteers. Didn’t it feel strange to be at the celebration while Jews are being attacked everywhere?

There’s nothing to be done about it. Life has to go on. Just as people don’t cancel weddings at times like this, so the scheduled ceremony went ahead despite the grim circumstances. That ambulance will assist us in being able to carry out our holy mission.

In parting, may I bless you with the hope that there should soon be shalom al Yisroel.