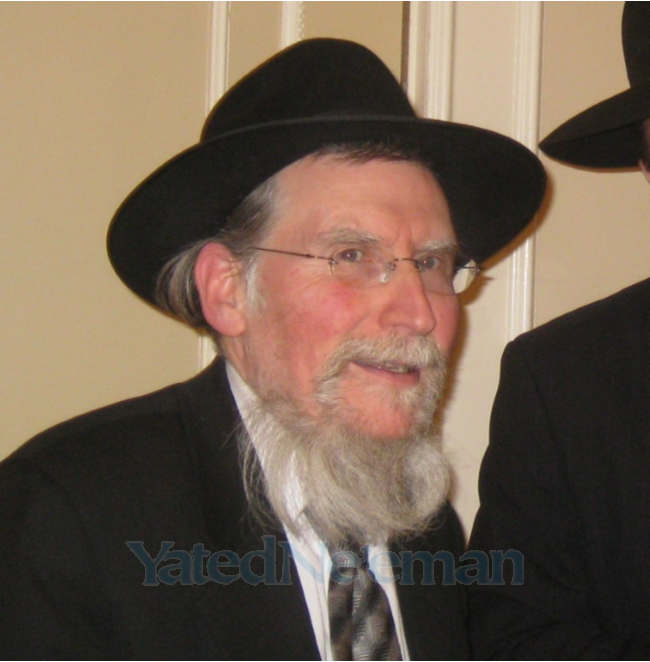 The first feeling was shock. Terrible, heart-rending shock. How could Lakewood, and so many beyond Lakewood, carry on without Rav Shlomo Gissinger zt”l? His footprint was everywhere and nowhere. He was involved with thousands and perhaps tens of thousands of yechidim, tens of thousands of individuals. He was the address where so many of the difficult areas of interpersonal strife, and physical and mental health issues, and their intersection with halacha, ended up. Irreplaceable is too weak a word to describe him. It is simply scary to think about the void that has been created with his passing.

Getting His Hands “Dirty”

While still in shock, a thought came to mind: If there was anyone whom I knew who emulated Dovid Hamelech, it was Rav Shlomo Gissinger. Chazal tell us (Brochos 4), “All the kings of East and West sit around [basking] in glory, while I dirty my hands…” Dovid Hamelech, the symbol of a king according to the Torah, taught us that the task of a king is not to bask in glory, but rather to get one’s hands dirty, to help families. Chazal tell us that in our times, the kings are the rabbonim. In this, Rav Gissinger was a true king and follower of the path of Dovid Hamelech. He spent days and nights in the little office in his home, an office lined with seforim and piled with seforim on chairs, advising people and “getting his hands dirty.”

Nothing was beneath him. Which person who merited entering that simple but exalted room can forget the hundreds of papers on his desk belched out by his fax machine and printer? Each one of them was a medical report from a doctor, as Rav Gissinger got his hands dirty reading these reports and using his brilliant mind and his heart that loved, embraced and cared so deeply about every Yid to try to find a halachic eitzah, a practical eitzah, to enable that person to solve his problem. Thousands of Jewish families were established because of his practical intervention, his eitzah and, most of all, his loving and caring heart that just couldn’t look the other way when people were in pain.

He was a rov and a counselor to many thousands, but they weren’t collective thousands. They were thousands of individuals. He found private time for each of those individuals, and he found the patience and wherewithal to throw himself into the details and nitty-gritty difficulties of each Yid – each man, woman, couple and child – who came to his door, and even for many who didn’t come to his door, but whom he heard about and proactively sought out to help.

The way he emulated Dovid Hamelech – “My hands are dirty with blood” – was both literal and metaphorical. Rav Gissinger represented a profound dichotomy. He was a person deeply steeped in Torah and yiras Shomayim. The way he feared transgressing a se’if kotton in the Mishnah Berurah or an implication in a teshuvah of Rav Moshe Feinstein showed how much he feared Heaven. Simultaneously, he was somehow able to descend into the “mud” of the problems faced by Yidden, by those in our difficult generation of ikvesa d’Meshicha. He understood them. He understood Yidden who suffer from the maladies that plague us, difficulties that previous generations could perhaps never contemplate in their most terrible nightmares, and he dealt with them. Despite being so far removed from the nisyonos of this generation on a personal level, he understood what our young people – and not-so-young people – are going through, and what our families are going through, and with profound love, he tried to address the issues. He tried to extricate people from the mud and the blood. Even if that meant that his pure neshomah would have to get dirty, he didn’t shy away from it. He didn’t care what people said. He was laser-focused on one objective – helping Yidden, saving Yidden, assisting couples and families live in peace. He never gave up on the Jewish people no matter what he saw and no matter what he was exposed to.

It is so much easier for a rov to give shiurim and drashos, which he did religiously every day and every week. Rav Gissinger, however, also saw his role as emulating Dovid Hamelech and sacrificing himself for Yidden, for broken Jews, for Jews filled with pain and worry, and getting his hands dirty in order to help them.

The Shepherd Who Didn’t Sleep

There was another way in which he emulated Dovid Hamelech. The Gemara teaches that Dovid Hamelech was awake at night; he never let a night pass when he slept. He took little catnaps. Rav Gissinger was like that, too. He helped people 24/7, but perhaps, the times that were most noted by the many who sought his counsel were the late nights. While the world slept, troubled Yidden, broken Yidden, Yidden suffering from shalom bayis problems, from infertility, from the most difficult, complex medical questions, questions that impacted their future, questions of pikuach nefesh, they all came to his door. He took each question as an individual shailah. He didn’t do things superficially, nor did he rely on hearsay. He would contact doctors and specialists and talk to them in-depth until he totally understood the issue. Could this experimental treatment be condoned by halacha? Often it could, but many times he had no choice but to say that it couldn’t. He used his brilliant mind and loving heart that simply couldn’t look the other way when others were suffering and spent a large portion of every night, night after night, week after week, year after year, just advising, helping, and feeling for others.

Men and women found in him the symbol of a “Shepherd of Yisroel.” Dovid Hamelech was a shepherd. Every one of his sheep was important to him. He tried to make sure that even the wild sheep, the headstrong ones, wouldn’t run away and get eaten by the lions. Rav Gissinger was like that, too. He never gave up on any of his sheep, because they were all Hashem’s children – and his.

His emulation of Dovid Hamelech did not stop there. Dovid Hamelech said, “Anochi tolaas velo ish – I am a worm and not a man” (Tehillim 22). Rav Gissinger, too, was the ultimate humble anav who saw himself as nothing. Yes, he was strong when he had to be and uncompromising when he felt that the circumstance demanded an uncompromising stance, but in his essence, he was the humblest of men. Insults just bounced off of him. He never sought to look good or choshuv in the eyes of others. On the contrary, he always tried to minimize his honor. He allowed himself to be stepped on, like a worm, because he never lost focus of the ultimate purpose. It was never about him, only about helping others. When he undertook the unsavory task of mediating between feuding parties and couples, or got involved in business disputes and personal fights, he was often insulted, sometimes egregiously, but most of the time he just smiled. He understood that, nebach, the person was in pain, and when one is in pain, one lashes out. He never took it personally. In fact, he was happy if they lashed out at him rather than at one another.

He was deeply uncomfortable with public praise and accolades. He just wanted to learn Torah and help Yidden.

He was a rov and a Yid who descended from his exalted, elevated level on the “mountain” to the common folk and their common problems that symbolize our lowly generation.

During those first few hours when the wound of his passing was still fresh, we were all paralyzed. All of those who had sat in his room unburdening our hearts and souls – this writer included – thought and still think, “Who will get himself dirty for us now that he is not here? Who will tenaciously pursue every avenue to find an eitzah for us? Who will remain awake at nights, advising us, answering our texts and our emails? Who will smile at us and love us and deeply care about us when a smile is what we need? Who will lower himself and his honor on behalf of Hashem’s People?”

In addition to a loss for the collective tzibbur, his passing is a profound eivel yochid, a deeply personal loss for tens of thousands of individuals.