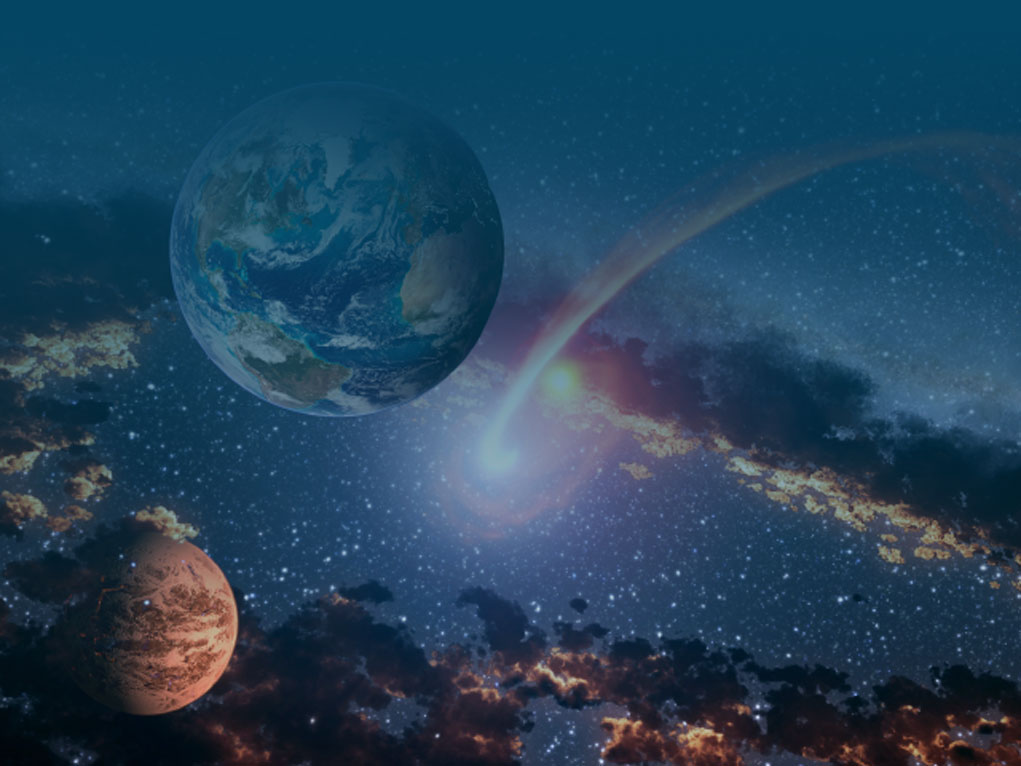 Imagine a pair of intergalactic travelers who decide they’d like to expand the scope of their sightseeing. They’ve already been to all the main tourist attractions, near and far. Now they want something different. Something exotic. They visit their friendly travel agent and say, “Some friends told us about a quaint little place they once stumbled upon. It’s called Earth, and it’s apparently located somewhere out in the boondocks. Can you direct us there?”

The travel agent tries at first to dissuade the couple from attempting so remote a journey, but they prove insistent. Ever eager to please a customer, he offers directions. After outlining the major space highways that they would need to take, he moves on to the lesser-known back roads. “… Then you turn right at Alpha Centauri—that 4.37 light-years from Sol, the star that’s nearest to Planet Earth—shoot down the Milky Way galaxy, and you hang a left when you reach Sol. Be careful to read the signs along the way; Sol is just a medium-sized star and quite easy to miss. Earth is in Sol’s solar system.”

“Is she the biggest planet in that system?” one of the travelers asks.

This elicits a chuckle from the knowledgeable travel agent. “Far from it!” he replies. “It’s a modest little place, three orbits out from Sol.” A bit doubtfully, he adds, “You can’t miss it. Enjoy your trip!”

The place we call home may seem enormous to us, but it’s actually just a speck in the vast scope of the cosmos. I’ve sometimes wondered why Hashem, in His wisdom, decided to fill the universe with so very many chunks of rock and gas-filled orbs. They fill our view of the sky like dust motes waiting to be swept up by an industrious housewife: enormous in reality, but, to us, no more important than the fluff that housewife might find under the beds. Those gazillions of stars and their attendant planets don’t seem to serve any function other than testify to His awesome and glorious might. And maybe that’s why they are there.

But perhaps there’s another message that He wants us to read as well. Something about the place that size and quantity occupy in His master plan. Those things seem not to factor much in Hashem’s program for humanity at all. In fact, they seem downright insignificant.

If Hashem had wanted them to matter, He would have made our globe the largest and grandest thing in creation, instead of a tiny planet in a miniscule solar system, buried somewhere in the middle of a smallish galaxy which is itself just one of an innumerable number of galaxies scattered through space. He would have had the entire physical universe revolving around us.

But He did not choose to do that. In terms of physical size and centrality, Hakadosh Boruch Hu has given us a set of circumstances that is no more than mediocre at best. What are we to learn from this?

We can take the question further. Suppose those intrepid space tourists should decide that they wish to meet some Jews while visiting Earth. Inquiring as to where they might find them, the travelers might be told, “Oh, there are not that many Jews on the planet, compared to all the rest. You’ll find a few of them here and there, scattered among the other nations.” The informant might smile. “But you’ll know them when you see them. The Jews might be small in number, but they’ve had a huge impact on the world they live in.”

Looking for Jews among the throngs of humanity that populate this planet is akin to searching for a couple of people somewhere in Madison Square Garden, when the place is packed to capacity for a concert. Searching for two among the tens of thousands present would be like looking for the proverbial needle in a haystack… unless those two Jews happen to be the Master of Ceremonies and the conductor of the orchestra. You’d have no trouble picking them out then!

Indeed, our tiny nation, throughout history, has been busily fulfilling Hashem’s promise to Avrohom Avinu that his descendants would be a source of blessing to all the nations of the world. The size of our nation, and the quantity of its members, have not mattered at all.

And they continue not to matter when it comes to military matters. We have seen in our own time how a small and unseasoned army in a struggling newborn state can defeat the armies of countries many times their size, if Hashem wills it. If it is part of His plan, then things like might and size and quantity become absolutely irrelevant.

Goliath was a giant of a man, a musclebound and superbly armed fighter who inspired terror in the Jewish soldiers facing him. But his downfall, when it came, was not through a warrior of equal physical stature, arms or training. Dovid was not especially tall or strong, and his weapon of choice was laughable in its simplicity.

But a little stone, fired from a simple slingshot in the hand of an average-sized man, can, if Hashem is the One directing its trajectory, become a triumphant missile to victory.

Given all of this, why should we feel even the slightest scrap of surprise that the tiny and untrained Maccabean army managed to bring the mighty Greek army to its knees in the war that led to Chanukah?

The answer is that we shouldn’t.

Deepfelt gratitude—yes. Awestruck wonder at our Father’s benevolence—certainly. But surprise? Never. Because it’s all part of the same pattern that we’ve witnessed since the beginning of time. A pattern that makes something other than size, quantity, or physical prowess the determining factors for victory. A pattern that bids us look elsewhere for the true meaning of strength and success.

Because we are constrained by our physical limitations, we can be deceived into overrating the importance of such blatant attributes as numbers and dimensions. We may end up lauding the physical and thinking that it holds all the answers. But that would be a mistake. The very structure of the universe tells us so.

Floating out there in their unimaginable immensity are untold numbers of celestial bodies. Stars that could easily swallow up our own sun and a thousand more like it. Planets that make our own Earth look like a pebble.

And yet, those awesome bodies do nothing more than form a backdrop to the divine charge that Hashem has placed on us: to cleave to His laws and values and bring His light into the world. The gargantuan dimensions of those celestial bodies are meaningless compared to the scope of our mission. And the longevity of those far-off stars is nothing compared to the immortality of the soul.

If our mythical space travelers want an impressive spectacle to take pictures of and to brag about to their friends back home, Planet Earth would not be the place to go. And if they expect, based on our nation’s contributions to the world, to find the Jewish people overrunning the globe in their billions, they’d be doomed to disappointment. Our world is not the most spectacular thing in the universe, and our nation is not remarkable for its size.

There are other factors at play in Hashem’s grand plan—factors other than vast quantity or stupendous dimensions. They are the intangibles which fill the heart and inform the mind.

It is our connection with the Divine which gives us our uniqueness. And that connection has infused us with the ongoing strength to survive Greek armies and modern-day ones, against the mightiest odds.