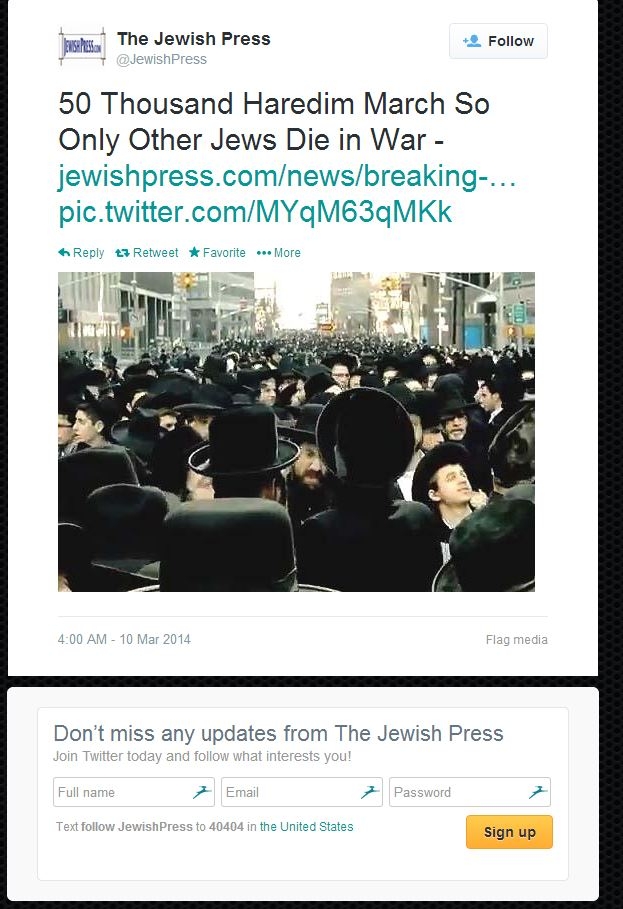 Tens of thousands of gutte Yidden flooded the streets of Lower Manhattan on Sunday to daven on behalf of Eretz Yisroel's lomdei Torah. They were peaceful and respectful. There were no speeches, no signs, nothing any haters could mockingly point to. But that didn't stop them. The same gang who are always ready to pounce on our community responded to the rally in force. Sunday night, The Jewish Press sent out a Twitter breaking news alert. The headline read: â€œ50 Thousand Haredim March So Only Other Jews Die in War.â€

Some things are expected and others are outrageous and beyond the pale. There may be room for debate, even though our position is correct. In a democracy, people can disagree. But to call 50,000 frum, peaceful people murderers because they gathered to daven is abhorrent.

That stark headline was part of a larger article The Jewish Press posted on its website from one of its regular writers, Yori Yanover, who slandered an entire community in a way reminiscent of the infamous New York Post coverage of the Stark murder.

Read his words: “They flooded downtown Manhattan with the anti-draft for Haredim message: everybody else is welcome to get themselves killed.”

He wrote sneeringly: “We’ve seen one demonstration of a few hundred thousand Haredim against the new law in Jerusalem (but not a single day’s work was lost!), and yesterday, in downtown Manhattan, another 50 thousand Haredim marched to condemn the evil decree.”

Going on, he writes, “Are you kidding me? Have you ever been to a Shabbes demonstration? Those kids can throw a rock at police like born Palestinians.”

He quoted one of the people at the rally who said, “Their whole world and their whole lifestyle is peace and love and in doing mitzvahs.” But he disagrees, of course. “OK, who can argue with that description of Haredi behavior? I’m sure non-Haredi women walking the streets of Beit Shemesh or boarding the bus in Bnei Brak would attest to that pure goodness.”

The Jewish Press article wasn’t too happy with the participation of the Satmar Rebbe, Rav Aharon Teitelbaum, saying that his followers “could forge a most brutal and violent commando unit.”

This is what the argument against the Torah world boils down to: “That, essentially, is the main argument being advanced by the deans of Haredi yeshivas: We have no trust in the Torah we’ve taught our students. We know better. This is why the only means we have of keeping them in line are extreme social pressure and intimidation. You take those away and Joe will spring the trap and become a normal man, availing himself freely of the gifts of a modern society. We can’t afford that.

“The post-Holocaust Haredi world is all about fear. Fear of new things. Fear of books. Fear of voices. And above all, fear that the education a young man receives during his 20 years in a Haredi yeshiva is worthless, because as soon as he encounters the outside world, those 20 years would vanish, melt away like Cholov Yisroel butter on a skillet.”

There you have it. It is obvious that a war is being waged on the chareidi community in Israel. One doesn’t have to be a rocket scientist to figure that out. A government that takes milk and bread out of the mouths of its poorest infants to further any goal cannot be considered to be working for their benefit.

A government and parliament says it will jail yeshiva bochurim who refuse to be drafted. It is all about political expediency. If Shas would have received three more seats in the Knesset, its members would be prominent ministers, chareidim would be praised, yeshivos would be funded, and Bibi would be the savior. But because Mr. Netanyahu needed the Religious-Zionist party to form his coalition, and because that group sealed an unbreakable bond with the ultra-anti-religious party of Yair Lapid, all of a sudden, Bibi’s natural partners became muktzah machmas mius. All Israel’s problems were caused by the hated chareidim who, apparently, want everyone to die for them to live. Because of the way the coalition was formed, yeshiva bochurim must go to jail, poor children must starve, goyim must be recorded as Yidden, irreligious tallis-and-tefillin-clad women must be given a spot to pray at Judaism’s most holy site, and brother must be turned against brother.

A government that was conceived in sin, brought about through creating a coalition between left-wing and right-wing brothers with one common interest, cutting the chareidi community down to size, cannot be excused as being interested in the pursuit of some higher goal. Torah has been the lifeblood of our people since the beginning and those who refuse to recognize what it is that creates our identity and sets us apart as a nation are fooling themselves and denying history and fact.

There is no way that anyone who knows anything about Yair Lapid and his agenda can view what is transpiring in Eretz Yisroel any differently. The man’s stated goal is the marginalization of religion in the Jewish state, and he has set out to punish chareidim in every way governmentally possible. Besides seeking to destroy the chareidim, he also has his sights set on other aspects of Jewish life in that country, from the rabbinate, to Shabbos, to kashrus, to geirus, and everything in-between. It is ridiculous to accept that anyone who proudly works with him, praises him, stands alongside him, and agitates for him can be anything but an enemy of religion, no matter how much they smile or in which words and language they couch their rhetoric.

Every gadol, every rov, every rosh yeshiva, every frum politician, every frum person in Israel, and anybody in this country who is aware of anything that is going on knows full well what the Yesh Atid party is all about. Yet, this writer, his publisher and others like them have the nerve to call us murderers and lecture us about ahavat Yisrael and other good things.

Those who stoke fires, create diversions, and fuel division in the pursuit of any goal expose themselves as guilty of hypocrisy and a refusal to examine the real facts the way they are. Throughout the ages, we have been victimized by blood libels. It is shameful that religious people are now utilizing the methods of Eisov to further their agendas. The people who write these articles and those who post and publish them despise lomdei Torah. It’s about time they admitted it and we should acknowledge it.

The article disappeared from the site after theyeshivaworld.com published a screen shot of it, calling attention to the horrendous nature of what was written, posted and twitted. I understand that, in response to an uproar, the writer was fired and the paper apologized.

But the cat was out of the bag and the damage was done.