â€œI Accept The P’sak With Loveâ€ 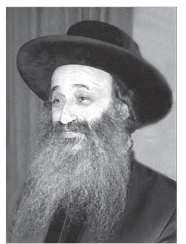 Rav Tzvi Hirsch Meisels ztâ€l was a rov in Veitzin, Hungary, and a highly regarded morah hora'ah. During World War II, because Hungarian Jews were not deported until 1944, Rav Meisels was still carrying on extensive correspondence with his colleagues in Hungary as late as 1943. After the occupation of Hungary, he was deported along with his community to Auschwitz, where his wife and six of his children were murdered. While in Auschwitz, he made halachic decisions on fateful issues that arose there.

Rav Meisels survived Auschwitz, emigrated to the United States, and became a rov in Chicago. In 1955, he compiled the correspondence he had managed to save and published a sefer, Mekadshei Hashem, which included letters from rabbonim who had been killed al kiddush Hashem. This volume is preceded by a section that details several horrific episodes that occurred in Auschwitz, among them an extraordinary series of events that culminated on Rosh Hashanah 5705.

Rav Meisels writes: “My intention is not to tell stories such as these at length, because there is so much to say, and much ink has been spilled describing the suffering inflicted on us by the Nazis, ym”sh. But this particular event, one out of an ocean of similar stories, is indelibly engraved on my heart and mind. On the last day of Elul 5704 (1944, Erev Rosh Hashanah 5705), the Nazis rounded up all boys aged eighteen and under. There were about 1,600 of these boys, who had until then managed to escape the gas chambers. The Nazis gathered their prey in an empty lot and erected a plank of wood at a certain height. Each boy would pass under the plank. Those whose heads reached the plank would live. Those who did not would be sent to a sealed barracks to await their fate.”

At the end of the selection, approximately 1,400 boys were left standing on the lot and were immediately imprisoned in a cellblock, to be put to death the following night. They were denied all food and water, and were placed under guard of Jewish kapos. The kapos could be trusted, for if any boys were missing, the loss would be made up by the kapos themselves. Many of these boys were the only surviving sons of adults in the camp, and these adults spent all day walking around the closed barracks, agitated and confused. Many people still retained sums of money or pieces of gold or precious stones that they hid in all kinds of places for just such an opportunity. These relatives approached the guard, begging them to free their loved ones. The kapos were open to bribery, and some fathers used hidden stores of money to free their children. Yet, before letting one prisoner free, the guards would always make sure to take another in his place. In this way, the Germans would still receive the same number of victims.

That entire Rosh Hashanah, the camp was overtaken by feverish activity. Desperate fathers borrowed, bartered, and gave up their last remaining possessions to save their children. Amidst the desperate activity, there were a few who realized the awful price to be paid for the freedom of their sons.

Rav Meisels continues: “I will never forget one terrible incident that I personally experienced. This incident symbolizes for me the holiness of Klal Yisroel and their sincere devotion to the holy Torah, even during their worst troubles. I was approached by an inmate who appeared to be a ‘simple’ Hungarian Jew. ‘Rebbe,’ he said, ‘my only son is among those boys condemned to the furnace. I have the means to ransom him, but I know without a doubt that the guards will take another boy in his place. I present before you a halachic question. Tell me what the law is according to the Torah. Am I allowed to redeem him? I shall act according to your decision.’

“When I heard this question, I was seized by trembling at the thought of ruling on a matter of life or death. I replied, ‘My dear friend, how can I render halachic judgment on this question? Even when the Bais Hamikdosh stood, such a life-or-death question would have been posed to the Sanhedrin. And here I am in Auschwitz, without a single halachic text for reference and without other rabbonim with whom I can consult. I do not have the peace of mind that is required to render judgment due to the great hardships and troubles that plague us. If it were the practice of the evil ones to first release the redeemed one and afterwards to take another in his place, there would be some room to lean toward a permissive ruling.’

“But the man wept bitterly and begged me unceasingly. He said to me, ‘Rebbe, you must tell me the halachah now.’

“I, in turn, pleaded with him, ‘Release me from this question, for I cannot tell you anything at all.’ But he continued to beg me, saying, “Rebbe, does that mean that you do not permit me to redeem my only son? If so, I accept the ruling with love.’

“I protested his words, telling him, ‘My dear Jew, I did not say that I forbid you from ransoming your son. I do not rule one way or the other. Do as you wish, as if you hadn’t asked me.’ Yet, he continued imploring me to give him a clear answer. When he saw that I refused to give him an outright halachic answer, he spoke with much emotion and fervor.

“‘Rebbe,’ he said, ‘I did what the Torah requires me to do. I asked a rov, and there is no other rov here but you. If you cannot tell me outright that I am permitted to ransom my son, it is a sign that you are not sure that the halachah permits it. Surely, if it were permissible beyond a doubt, you would tell me so. So I understand this to mean that the halachic judgment is that it is forbidden according to Jewish law. I accept this verdict with love and joy. I will not do anything to remove him from the group.’

“All my pleadings to him not to put the responsibility on me were to no avail. He only repeated what he had said, with heartrending weeping. He fulfilled his words and did not redeem his son. That whole day, Rosh Hashanah, he spoke to himself joyfully, saying that he merited sacrificing his only son to Hashem. He prayed that this would be considered by the Ribono Shel Olam like Akeidas Yitzchok, which had also taken place on Rosh Hashanah.”

Rav Meisels concluded this heartrending episode: “And you, dear brothers, can you fathom the bravery of this ‘simple’ Jew? I have no doubt that his actions provoked a tumultuous uproar in the highest realms, so that Hakadosh Boruch Hu Himself said, ‘See what I have created. The Bnei Yisroel have rightfully been called, ‘You are My servant, Yisroel, in whom I take glory.’”

Thanks to Rebbetzin Giti Weissmandl, who first wrote this remarkable story in these pages.